The Broad Street Run started at 8 a.m. on Sunday, May 5 in South Philly with rain that will likely last all day 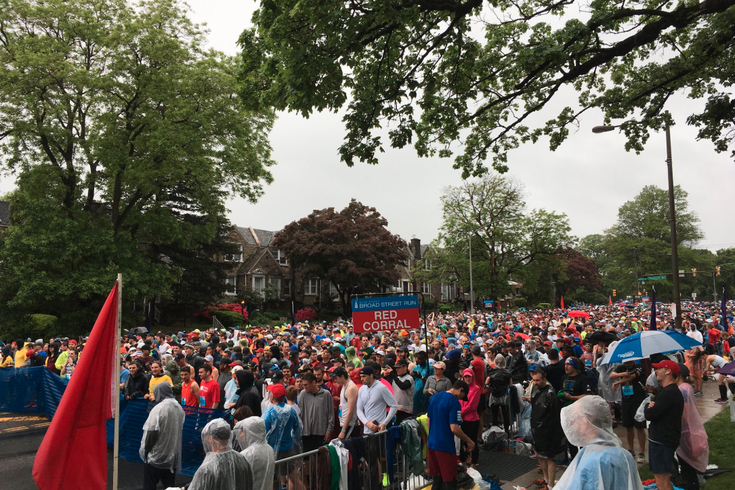 On Sunday, May 5 the Broad Street Run began with light rain showers that were likely to persist all day.

The annual 10-mile Broad Street Run kicked off at 8 a.m. on Sunday, despite rain and less-than-ideal conditions for runners.

The run closed down some streets and has restricted parking to make room for the 40,000 that flood the area annually Sunday morning.

It's a busy day in Philadelphia, as the run will wrap up around noon, then the Phillies play the Nationals at home at 2:05 p.m. and the Sixers host the Raptors at 3:30 p.m.

Many SEPTA bus routes were detoured for the race and 12 express BSL trains were added to the schedule before 9 a.m. Runners could ride a train for free prior to the race.

According to the SEPTA's System Status, southbound service was experiencing delays of up to 10 minutes around 8 a.m. due to equipment issues in Hunting Park. A spokesperson confirmed a BSL train at Wyoming Station had equipment problems around 8:30 a.m., causing delays that "will be cleared up shortly," as of 9:06 a.m.

MFL: Service eastbound may experience delays of up to 10 minutes due to equipment issues at Millbourne Station.

the @SEPTA train enroute to the Septa sponsored Broad Street Run broke down 1.5 miles from the start line so now my boyfriend has to run the extra way to get there. Nothing more Philadelphia than this.

Hey Shane, my wife is currently on one of the local subway trains heading up from NRG to the Broad Street Run start. She says it's been stopped for about 30 minutes now. Any update as to what is going on/when they could expect to be moving?

Light rain persisted through the morning. According to the National Weather Service in Mount Holly, New Jersey, there is a flash flood warning in place in the Philadelphia region until 4 p.m. on Sunday. Showers will likely continue until 7 p.m.

.@IBXRun10 here I come! Race ready and wet. First race in the rain, and I'm so grateful to be doing it #funrun style with new friends from the second best running club in the world. Love y'all, #RunchBunch. #BroadStreetRun pic.twitter.com/pPVWm03Ddc