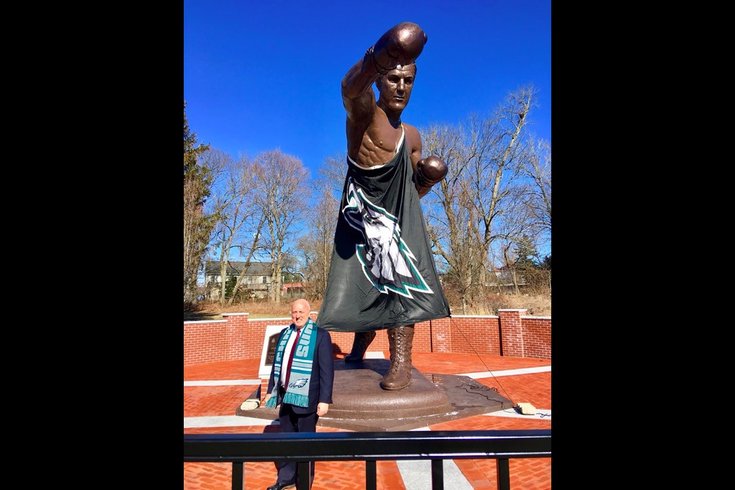 A Massachusetts city held up its end of a Super Bowl bet by adorning its statue of Rocky Marciano with a Philadelphia Eagles flag.

Carpenter lost the bet to Philadelphia Mayor Jim Kenney when the Eagles topped the Patriots, 41-33, in dramatic fashion in Super Bowl LII.

Prior to the game, the two mayors had agreed that the loser would have to decorate their city's respective Rocky statue in the opposing teams' gear.

"A bet's a bet," Carpenter wrote on Twitter after posing beside the statue. "Although painful, it's been great to bring some positive exposure to our statue, Rocky's legacy and our City."

A bet’s a bet. Today, I am honoring my wager with @PhillyMayor by dressing up Brockton’s Rocky in @Eagles attire. Although painful, it’s been great to bring some positive exposure to our statue, Rocky’s legacy, and our City @NBC10Boston @GregHillWAAF @7News @WCVB @BostonMagazine pic.twitter.com/flbzJxEvcN

It should be noted that it took Brockton more than three weeks to carry out its end of the bet. Nevertheless, Kenney responded in kind.

Kenney thanked Carpenter for his sportsmanship Wednesday on Twitter, adding "Great to meet you last month – and #FlyEaglesFly!"

Appreciate your sportsmanship, Mayor! Great to meet you last month — and #FlyEaglesFly! https://t.co/nUe82yZuoF

Of course, it should be noted that the Rocky statues do not depict the same boxers.

The Rocky Marciano statue, which sits outside Brockton High School, depicts the former heavyweight champion, a Brockton native who died in 1969.

Philadelphia's Rocky statue, which sits alongside the Philadelphia Museum of Art, depicts Rocky Balboa, the fictional boxer from the "Rocky" movies.

The Enterprise, a newspaper in Southeastern Massachusetts, posted a video of the Rocky Marciano statue being draped in Eagles garb.