Rhys Hoskins is really excited about the Phillies this year.

Don't let his cool, calm demeanor or his deep, quiet voice fool you — the 25-year-old slugger wants to win, and he wants to do it in Philadelphia.

Tuesday, less than a week away from Christmas, Hoskins wasn't doing his holiday shopping or getting ready for time with family. He was in South Philadelphia, standing quietly in the back of a Phillies press conference watching his team introduce Andrew McCutchen as the newest Phillie.

"I think we've got some pretty good baseball players so far," Hoskins told a gaggle of reporters after the short event concluded. "It's really exciting, [adding] a couple more veteran guys in [Jean] Sergua and Cutch, which I think will really add to the clubhouse presence, especially when we get late in the year.

"I think we've already gotten better as a baseball team, how are you disappointed with that? I think if spring training started right now we would be a better baseball team now than we were at the end of last season."

Phillies fans are hoping they get even better before pitchers and catchers report in February.

Hoskins clearly wants to give Harper space to make his big decision, but won’t hesitate to talk up the quickly improving baseball environment in Philadelphia.

"I think winning, the improved season, does that itself," Hoskins said of the Phillies becoming a more attractive free agent destination. "You heard Cutch talk, he saw it first hand when he came as a visitor last year. He saw something special was brewing here and I would agree with him. There is a plethora of young talent here." 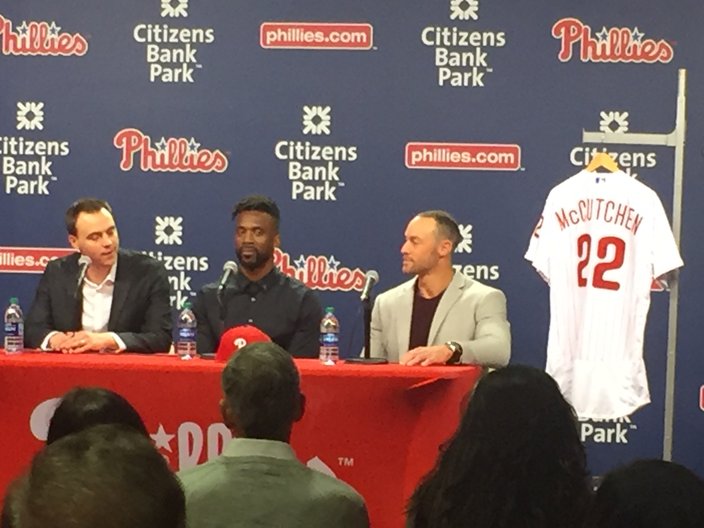 Andrew McCutchen is introduced as a Phillie.

"I saw this team from afar, saw what they were able to do this past season, they fell a little short but you can see it's there," McCutchen said in his press conference.

"It's amazing just to be back here, to be somewhere I am familiar with, this is something not foreign for me to be on the other side of the state to be close to home, our home is in Pittsburgh, it feels good to be here, not to feel like we're so far away."

McCutchen, who among other things said he intends to be an every day player (a statement echoed by Kapler who was also present), didn't really want to weigh in on the Harper sweepstakes, or the impending visit of Manny Machado.

"It's not as exciting for me as it is for everyone else who likes to talk about it," he said. "Those guys deserve whatever they're gonna get. I am very happy for them, for that, but I don't think too deeply into it."

Hoskins did weigh in, though he wouldn't reveal if he had a preference between the two.

How does Hoskins, fresh off of a 34 home run 96 RBI season, get his offseason news? Just like the rest of us of course.

"I'll go on Twitter, yeah, but I am not actively seeking things," he said. "I've figured out in my short time in baseball that as soon as you think you've figured out whats going on you don't know what's going on, that's when it's probably going to change. Until I see a press conference that's when I know for sure."

So far this offseason, the Phillies have made two big moves to impact their offense in 2018 — their biggest weakness from a year ago. Trading for Segura (who will likely play shortstop) and inking McCutchen (to a three-year, $50 million deal) gives the Phils a much better line up. We have it projected below:

Of course, replacing Williams or Herrera with Harper, or Franco with Machado would put the team in NL East favorite conversations.

But there is no guarantee that any more "stupid money" will get spent.

"If we are done making moves I think we have made some pretty good moves," Hoskins said.