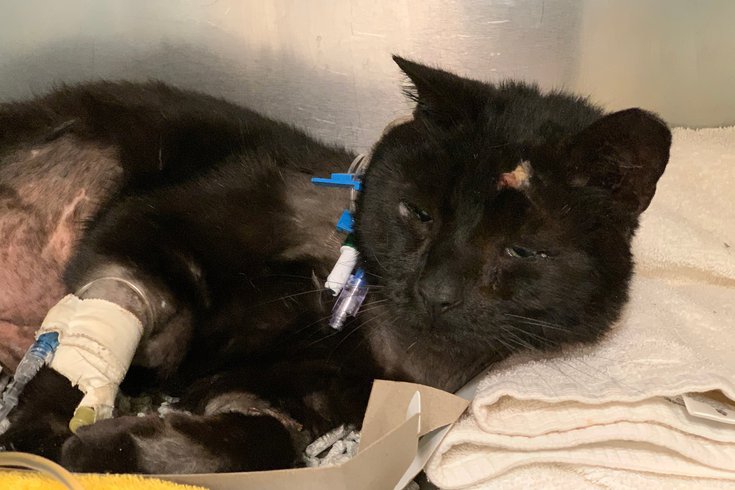 A court date has been announced for the two juveniles, 12 and 17, who allegedly sicced their dogs on Buddy the Cat in Frankford last month, leaving the feline in critical condition.

Buddy the cat, who was mauled by two dogs in Frankford last month, is recovering well after his attack and may have found a permanent new home.

Katie Venanzi, the vet at BluePearl Pet Hospital who took care of Buddy the first night after the incident, is currently working to adopt him, said Gillian Kocher, a spokeperson for the Pennsylvania SPCA. Venanzi has been fostering Buddy since he was released from the hospital on April 1.

MORE NEWS: A look inside the Philadelphia real estate market and steps that can be taken for the future of affordable housing

“We want to do whatever he needs,” Venanzi told Audacy when it was first announced she was taking the cat home. "We are going to take it day by day and see how he does, but we are really hoping to keep him."

#BREAKING Buddy the Cat is leaving @PSPCA. He’s going into foster care! A veterinarian who cared for Buddy when he was in critical condition has been selected to foster him. ⁦@KYWNewsradio⁩ pic.twitter.com/fc9eyhlZ4y

Buddy's former owners were not able to take him back, as they've tried unsuccessfully to bring the outdoor cat into their home, where he would be safer.

“We understand that he used to live outside," Venanzi said. "If he is not comfortable living in our house, we are willing to work with other people who are going to give him an opportunity to be in a safe environment but still exposed to the outdoors."

Now that Buddy is at Venanzi's house, he seems to be adapting to life inside, according to the most recent update from the PSPCA. He spends every night in his foster parents' room and is getting along well with their other cat, Teddy.

The PSPCA is using Buddy's story to highlight instances of animal abuse with the hashtag #SaveEveryBuddy.

The organization made a line of t-shirts with the slogan which have already garnered close to $30,000 and it has raised thousands more in honor of Buddy, Kocher said.

Buddy's attack garnered a lot of attention because it was captured on video. While similar instances of animal abuse aren't uncommon, they're rarely documented so clearly.

The PSPCA says it has rescued 158 animals from abusive situations since Buddy was attacked on March 22.

"That's more than five Buddy's each and every day," the PSPCA said.

After Buddy's attack, the PSPCA and other animal rights groups launched a social media campaign to identify the two individuals who were responsible for the attack. Late last month, a 17-year-old and a 12-year-old were taken into custody and charged with animal fighting and aggravated animal cruelty, which are both felonies.

A May trial date has been announced for the two juveniles, Audacy reported.

The PSPCA is still accepting donations for Buddy on its website. The funds will be used to care for him and other cats rescued from abusive situations.