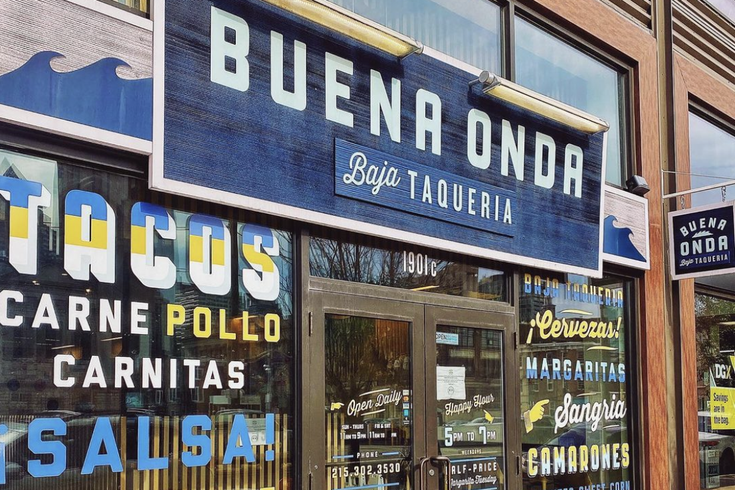 Buena Onda, the Baja-themed taqueria from chef Jose Garces, is set to open additional locations in Rittenhouse and Radnor by late spring.

Jose Garces' taqueria Buena Onda is set to expand on its popular Center City location with two additional restaurants in Rittenhouse and on the Main Line in the coming months.

Garces opened the original Buena Onda at 1901 Callowhill St. in 2015, benefitting from its close proximity to The Barnes Foundation, Rodin Museum and other attractions. The restaurant is known for its tacos, nachos, bowls, guacamole and alcoholic beverages, in addition to gourmet Boylan fountain soda.

The two new Buena Onda locations are planned at 114 S. 20th Street in Center City and 200 N. Chester Road in Radnor, according to the Philadelphia Business Journal.

The Rittenhouse location is currently the home of Garces concept Tinto Pintxo, which will temporarily close with plans to reopen at a new location in the fall. In Radnor, Buena Onda will take over the space of a former Jimmy John's location.

Garces previously had opened a second Buena Onda location at the King of Prussia Mall, but the restaurant shut down in the spring of 2018, around the time the Garces Group declared bankruptcy. The restaurant group was acquired by Louisiana-based Ballard Brands, which now operates under the umbrella of Ideation Hospitality, where Garces serves as the chief culinary officer.

Ideation Hospitality announced last year that it plans to expand Buena Onda nationally, including some sites that use a ghost kitchen model, and will pursue additional locations in the Philadelphia area.

The Rittenhouse and Radnor locations are expected to open in the spring.