By Philadelphia Building and Construction Trades 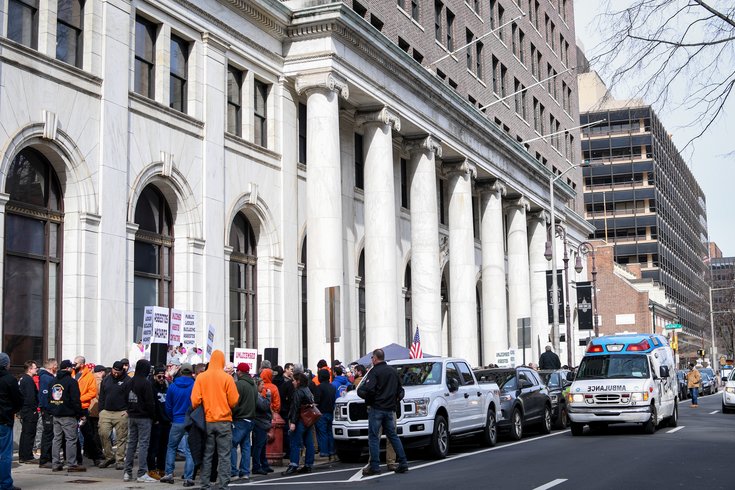 A crowd gathers outside of the Public Ledger Building in Philadelphia on February 12, 2020.

A dangerous asbestos situation affecting the city’s historic Public Ledger Building was the focus of a press conference held outside the building this morning by the leadership of the Philadelphia Building and Construction Trades Council, the Fraternal Order of Police Lodge 5, Councilmember Bobby Henon and more than 500 union workers. The speakers each demanded the shutdown of ongoing construction taking place within the building until the asbestos is properly remediated. 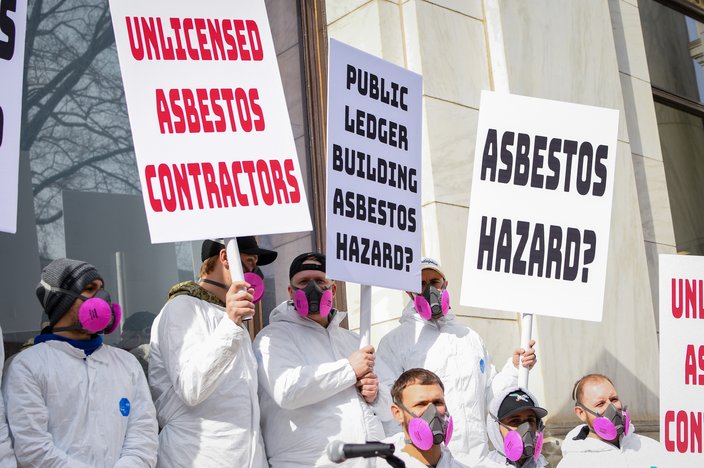 Local IBEW 98 workers gather behind a podium outside of the Public Ledger Building in Philadelphia, where they protest the hiring of non-union workers inside of the building working unprotected to remove asbestos. 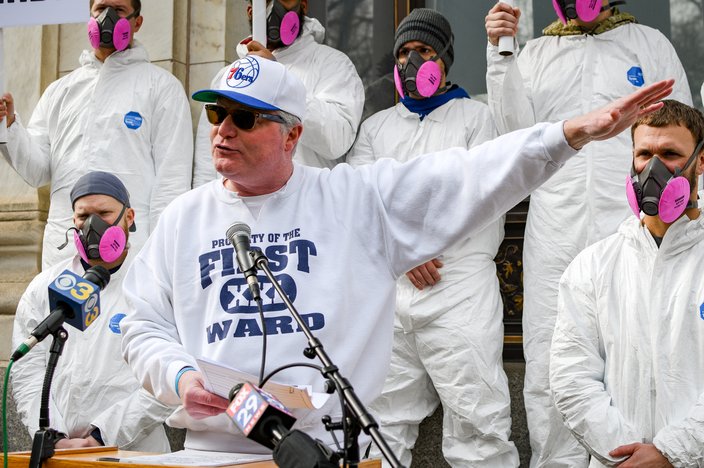 Buisiness Manager of Philadelphia Building Trades, John J. Dougherty, speaks at a demonstration about the unlicensed, non-union work being done inside the building.

Exposure to asbestos can lead to deadly diseases, including mesothelioma, whose symptoms often don't manifest until years after the initial exposure to asbestos fibers. As evidenced by the rash of recent Philadelphia Public School building closings, asbestos continues to be a significant public health crisis in the city as a result of Philadelphia's aged infrastructure.


"This isn't a union vs. non-union issue. This is a union vs. non-human issue," said Building Trades Business Manager John J. Dougherty. "They're exposing their own workers and others to this poisonous asbestos and they don't care. They come in here from out-of-town and figure they can do whatever the hell they want. It's all about their greed. We're not going to stand for it. We're going to call them out every single time they try to get away with using unlicensed, unqualified contractors to do this dangerous work. We will continue to work with the city to expose these bad actors in the construction industry's Underground Economy and hold them accountable." 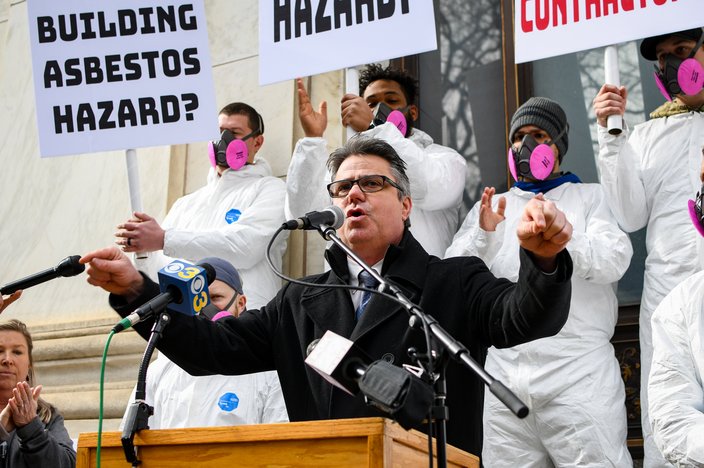 City Councilperson Bobby Henon speaks outside of the Public Ledger Building in Philadelphia about the unlicensed, non-union workers inside removing asbestos.

"This owner is trying to remediate the asbestos on the cheap. The disastrous results culminated in a number of violations issued against him by the Health Department," said Henon. "This dangerous situation at the Public Ledger Building typifies the Underground Economy in our construction industry, an issue that I am making a cornerstone of my City Council agenda. They think they can scam the system because oversight and enforcement are lax as a result of too few L & I Inspectors. They also know the fines and penalties for cheating the system amount to a slap on the wrist. They'll gladly pay the cheap fines in order to continue to cheat the system to maximize their already obscene profits. It's my intent to procure more resources for L & I and to raise the amount of fines to both deter contractors from cheating and help fund the additional revenue L & I needs."


In furtherance of that goal, Henon is convening a public hearing with L & I officials on Friday, February 21 at City Hall in which Henon and other Council Committee members will ask hard questions of city officials responsible for oversight and enforcement of City Building Codes. It's another step in the efforts to bring an end to the dangerous Underground Economy in the City of Philadelphia.