The Camden County Prosecutor’s Office calls motions to dismiss murder charges and suppress evidence against David “DJ” Creato Jr. in the death of his son “wholly without merit in fact or law.”

Fuschino’s client, DJ Creato, is charged with first-degree murder in the death of his three-year-old son, Brendan Link Creato.

The boy’s lifeless body was found on the morning of Oct. 13, 2015, about three hours after his father reported him missing. DJ Creato was indicted and arrested in January, and pleaded not guilty. He remains jailed, unable to post bail of $750,000.

A hearing on the motion is set for May 16 at 1:30 p.m. before Camden County Superior Court Judge John T. Kelley.

Shah’s legal papers set the stage for the hearing, highlighting the points and counterpoints that will be made.

The 50-year-old state Medical Examiner Act calls for medical examiners to go to the scene, conduct an investigation and collect evidence, she acknowledged, but not doing so isn't grounds for a dismissal of the murder charge against Creato.

She added Fuschino “is unable to provide any legal support for his misplaced proposition.”

Citing the New Jersey Supreme Court, she argued that the differences between the collection of evidence by detectives and medical examiners has “little substantive difference,” especially since all evidence collected eventually goes to the prosecutor.

She also argued that “coordinated and cooperative efforts” between law enforcement and the medical examiner are “required” and “necessary.”

Fuschino did not immediately respond to a request for comment. 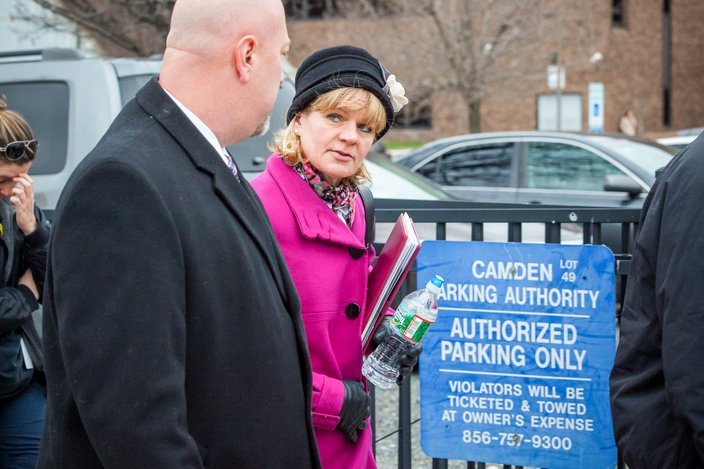 Thom Carroll, File/PhillyVoice
Shah also rejected Fuschino’s argument that Feigin’s testimony to the grand jury about the meaning of the dead boy’s clean white socks and his placement in a stream running into the Cooper River in Cooper River Park.
She said Feigin had concluded the child was placed on a rock in the water and had not walked to the site of his own accord through his own personal observations, the homicide investigation “and common sense.”

Shah said the pathologist’s testimony and opinions were “necessary and entirely proper,” having concluded that the boy’s cause of death was “homicidal violence by undetermined etiology,” and not through an accident.

Claims that Creato was not advised of his Miranda rights and also of his right to counsel are “utterly false” and “untrue,” Shah also argued.

As part of that argument, Shah submitted a consent to search or seize the defendant’s cell phone, signed by Creato at 10:50 a.m. on the day of his son’s death In her legal brief, Shah wrote that at the time Creato signed that form, “It is clear from the conversation (with two detectives) that the defendant was not a suspect in his son’s death.”

Shah also references a transcript of Creato’s questioning where he at various points told police he wanted to answer their questions and did not want representation by a lawyer during additional questioning.

Fuschino arrived at Haddon Township’s police station, in the basement of Haddon Township's city hall, at about 3 p.m., on Oct. 13, according to the timeline spelled out in Shah’s papers.

The Philadelphia lawyer told police he’d been engaged to represent Creato, according to the brief. He then asked to speak with his client and gave police his business card, according to Shah’s legal papers.

At 3:19 p.m. that day, Creato was shown Fuschino’s card, according to Shah’s papers, and asked if he wanted to talk to the lawyer.

“The defendant immediately responded, ‘No,’” Shah says in her brief.

Creato then asked, “Do I have any reason to need an attorney?” according to Shah's filing.

Camden County Detective Michael Rhoads again told Creato he was not a suspect, and added “We’d like to talk to you further, but again it’s your choice if you want to talk to him (Fuschino) or not,” according to Shah.

At about 6 p.m. police asked Creato if he would consent to a Computer Voice Stress Analyzer, a type of lie detector test, and he consented, at which point he was told of his Miranda rights against self-incrimination, according to Shah’s filing.

Shah also submitted a “statement of rights” signed by Creato at 6:05 p.m. that day, which itemized the rights he waived when signed, including the right to remain silent and the right to an attorney.

Her filing indirectly implies Creato failed the CVSA test, but does not reveal any details.

Of the test, Shah wrote only: “When he was advised of the results, he asked detectives if he could take the test again.”

Neither the prosecutor’s office nor Fuschino immediately responded to request for further comment on the CVSA test, which law enforcement sees as a useful tool, but is not admissible in court.

Shah’s legal papers state that Creato continued to speak to detectives until about 9 p.m. – about 11 hours of questioning – and his iPhone was returned to him when he left the police station.

The phone had contained thousands of texts he exchanged with his then-girlfriend, Julia “Julie” Stensky, who was also questioned by police on Oct. 13. Cellphone pictures of the spot where Brendan Creato’s body were found were also found on the phone.

The prosecution contends DJ Creato’s motive for killing his son was to enable him to continue the relationship with Stensky.

Stensky had worked the summer before the boy’s murder at the home improvement business of David Creato Sr., DJ Creato's father.

The prosecution alleges that Stensky's dislike of children motivated DJ Creato to kill his son.