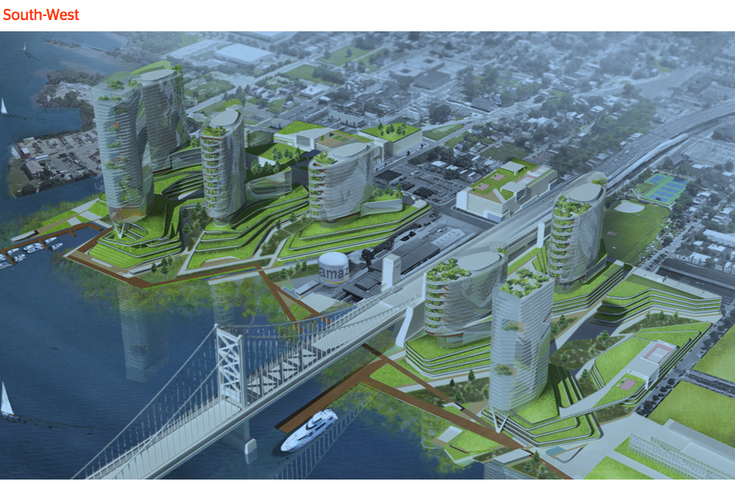 An illustration of the Camden proposal for HQ2 on the riverfront shows a campus flanking the Ben Franklin Bridge.

Camden submitted a proposal to Amazon Thursday which calls for building its second headquarters on the city’s waterfront, on either side of the Ben Franklin Bridge, facing rival applicant Philadelphia.

The City of Camden, New Jersey is offering 138.58 acres of developable property within a .75-mile radius that meets the criteria described by AMAZON for HQ2. 71% of the property offered is currently publicly held and can be transferred to Amazon in total or over time, subject to a redevelopment agreement. 29% of the proposed property is privately held with letter agreements indicating that the owners will sell the property at market rates.

Illustrations accompanying the proposal clearly show the site is on either side of the bridge, near the home of Rutgers University-Camden and the Cooper Grant neighborhood.

Incentives in the proposal include:

• A 20-year tax abatement from the city

• An economic opportunity “transferable corporate tax credit equal to the value of the cost for all soft and hard costs associated with the acquisition, relocation, and development of any new or refurbished building in the City of Camden up to $350 million."

• A proposed state tax credit of up to $5 billion, which could potentially carry forward for up to 50 years. The credit hinges on job creation and are phased. 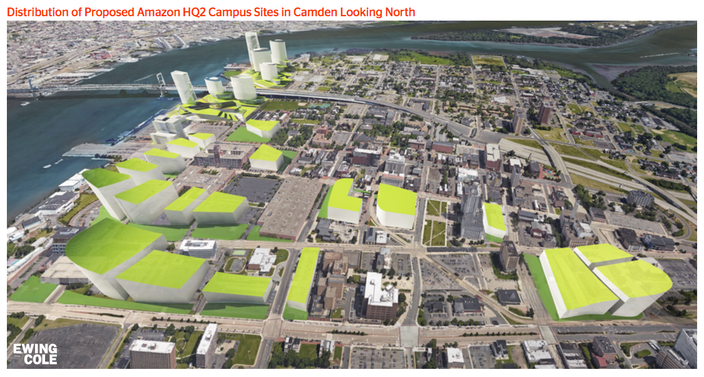 Camden is offering 138 acres of developable property to Amazon, with much of it on the Delaware waterfront and proximate to PATCO public transit. This illustration submitted as part of the Camden proposal shows the properties.

The entire proposal and details are here.

Camden leaders sounded optimistic Thursday despite the decision of the state to back a proposal in Newark.

Mayor Dana Redd said New Jersey’s decision to back Newark’s Amazon submission “has not deterred us from applying.”

The incentives approved by the state for Newark could be shifted to Camden, should the city prevail.

But she’d be happy, too, if another New Jersey city lands the site, which carries with it the promise of $5 billion in investments and 50,000 high-paying jobs.

Redd, who leaves office next year, said she thinks the process for the state’s selection “tried to be objective,” and she declined to fault Gov. Chris Christie when questioned by a local columnist.

She pointed out more than 100 cities around the country were lobbying for the HQ2 site.

Crossing his fingers, he said the issues that might arise from Amazon building a second headquarters in Camden “is a good problem.”

Kris Kolluri, the chief executive officer at Rowan University / Rutgers University-Camden’s board of governors, said Amazon could “amplify” what the two educational institutions are already working on in Camden.

He said integrating a meds-and-eds corridor with Amazon “fits perfectly.”