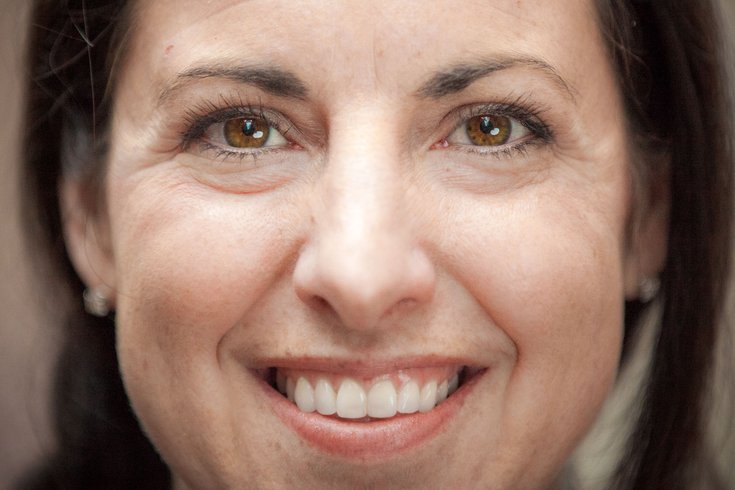 Mayoral candidate Melissa Murray Bailey says she wishes she only needed four hours of sleep each night so she could accomplish more during the day.

Melissa Murray Bailey is a business executive with Universum, an employer-branding company based in Sweden. A New Jersey native, she moved to Philadelphia after working internationally. At 36, she is the youngest candidate and the only Republican running for mayor.
But can Philadelphia fall in love with Bailey — or any of the other six mayoral candidates?
PhillyVoice sought to find out by conducting an abbreviated version of a romance experiment made famous by a New York Times article published earlier this year.
The exercise, developed by psychologist Arthur Aron, caused two strangers to fall in love by having them answer 36 questions that gradually grew more intimate. Then, Aron had the couple stare into one another’s eyes for four minutes.
In the hopes of getting a more intimate portrayal of the people running for the city’s top office, PhillyVoice invited the seven mayoral candidates to sit down with us for the exercise. Four candidates responded, including Bailey.
Here’s what Bailey had to say. (Some responses have been edited for brevity. Follow-up questions not part of Aron's experiment are in italics.)
PhillyVoice: What would constitute a perfect day for you?
Melissa Murray Bailey: I’m from New Jersey, as everyone knows right now. So, most of my family is in Ocean City, N.J. We spend a lot of time down there with my parents in the summer. Waking up in the summer, beautiful sunny day and going up on the boardwalk and running with my husband and my daughter in the stroller. It’s not really running because we’re running and my grandparents are at the coffee shop [and] we’ll stop and talk to them. My dad is running the other way with my mom and we’ll stop and talk. Then we’ll see my uncle. Then we come back to my parents' house and my niece and nephew are there. I have three sisters. So just that relaxation in the summer in the sun, is really the ideal.
PV: When did you last sing to yourself? To somebody else?
MMB: Pretty much anytime I’m in the car. I cannot pass up singing along to a great song. Bon Jovi comes on the radio – forget it. I was driving down Cottman Avenue a couple of days ago. I was just jamming out. Then I looked over to the side of me and I saw one of the ward leaders up in the northeast. He was just dying, laughing at me. But I wouldn’t give that up for anything – rolling down the windows, belting out at the top of my lungs. And to somebody else? Well, I have a four-year-old daughter. Every single night I sing to her. It’s part of our nightly ritual.
PV: Do you have a secret hunch about how you will die?
MMB: I don’t. I really think that’s in God’s hands. There’s a lot of other things that I’m worried about and have to be thinking about. But that’s not one of them.
PV: If you could change anything about the way you were raised, what would it be?
MMB: I really don’t think anything. I love my family. I didn’t always love how I was being raised at the time, but it turned me into who I am. I wouldn’t change who I am. Although, at the time, I might not have agreed with everything, but I’m following in my parents’ footsteps right now. So I think that’s the best compliment – when you’re replicating what somebody else did. 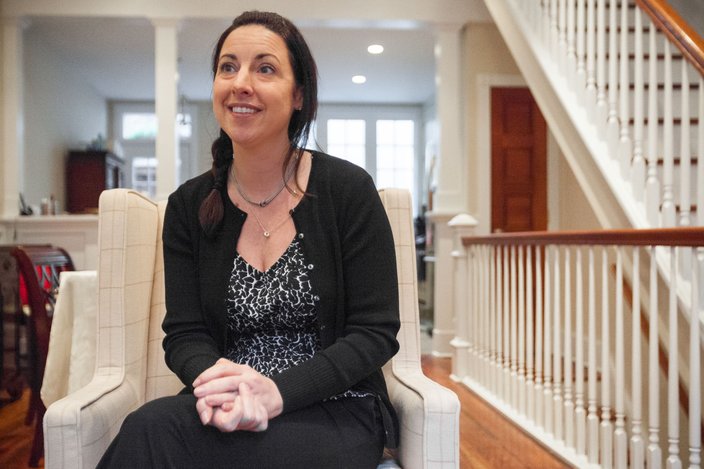 Mayoral hopeful Melissa Murray Bailey says her most treasured memory is the first conversation she had with her husband. (Thom Carroll / PhillyVoice.com)
PV: If you could wake up tomorrow having gained any one quality or ability what would it be?
MMB: To be able to operate on four hours of sleep or less. There are so many things to do in the day that I just really need more time. So, either to be able to operate on less sleep or be able to do things more efficiently. Some kind of combination of the two of those.
PV: What is your most treasured memory?
MMB: I think it would probably be about 16 years ago – the first conversation I had with my [future] husband. We had mutual groups of friends. We were out together and we were walking back to our individual dorm rooms. We started talking and we sat outside in front of a bike shop in College Park, Md. and just talked the entire night. A really good memory.
PV: How do you feel about your relationship with your mother?
MMB: It’s really been evolving over time. When I was a teenager, we had mutual respect but maybe a little bit of disagreement. As I’ve grown older, we’ve only grown closer. I really look to her for advice, especially as I think about raising a daughter. It’s such a hard thing – raising a child. My mom raised four girls – not an easy feat. But she’s still so generous with her time and loving and giving back to the community. All things that I want for myself and my family.
PV: Complete this sentence: I wish I had someone with whom I could share …
MMB: Maybe listening to country music. It’s one of the only things that my husband and I don’t see eye-to-eye on. When we started living together I had to curtail a little bit how much I could really be rocking out to country music.
PV: When did you last cry in front of another person? By yourself.
MMB: Well, most recently, is when I was being interviewed by the Daily News. That’s public information now. But the time before that was when I was telling my team at the company that I work for that this is something I was going to do. I got really choked up because we’ve been through a great journey together. I would never want them to feel like I’m letting them down or abandoning them. But this is also something that is really important to me. I don’t know if I was full-on crying, but I definitely got tears in my eyes. And by yourself? Fortunately, I don’t have to cry to myself all that often because I have such a supportive husband that, if I’m crying, it’s usually with him supporting.
PV: Your house, containing everything you own, catches fire. After saving your loved ones and pets, you have time to safely make one final dash to save any one item. What would it be? Why?
MMB: Kind of boiling down everything that you have into one thing is kind of hard. But we have a waterproof gallon bag that has all of our really important documents in it – birth certificates, passports, everything like that. It would probably be really devastating. Dealing with the government is hard enough as it is. I would love to have everything that makes that stuff a little bit easier.