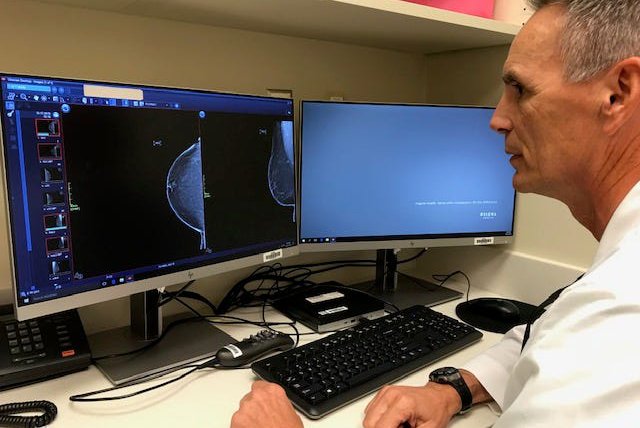 The overall cancer death rate dropped by 2.45% from 2017 to 2018 — a record amount, according to the American Cancer Society. Above, Dr. Steven Allgood examines a mammogram at Prisma Health-Upstate's Breast Health Center in South Carolina on Oct. 22, 2019.

The overall cancer death rate dropped by a record amount for a second straight year from 2017 to 2018, continuing an annual decline that began in 1991.

The death rate — which takes several years to determine — dropped by 2.45%, according to the American Cancer Society's latest analysis. The decline was driven by substantial improvements in lung cancer mortality.

This progress has occurred as reductions in other leading causes of deaths have stalled in recent years. Still, cancer remains the second-leading cause of death in the United States.

The American Cancer Society's annual cancer statistics report estimates that nearly 1.9 million new cancer cases will be diagnosed in 2021 and 608,570 Americans will die from cancer. These projections are based on incidence and mortality data through 2018. The impact of the COVID-19 pandemic is still unclear.

"The impact of COVID-19 on cancer diagnoses and outcomes at the population level will be unknown for several years because of the time necessary for data collection, compilation, quality control and dissemination," said Rebecca Siegel, lead author of the report.

"We anticipate that disruptions in access to cancer care in 2020 will lead to downstream increases in advanced stage diagnosis that may impede progress in reducing cancer mortality rates in the years to come."

The report projects 85,440 new cancer cases in Pennsylvania and 56,360 in New Jersey. Breast, prostate and lung and bronchus cancers are expected to be the most prevalent.

Advancements in detection and treatment

About 3.2 million cancer deaths were prevented from 1991 through 2018, the data shows. Improved survival rates are largely due to earlier detection, improved treatments and fewer people smoking.

Survival rates are highest for prostate cancer, melanoma of the skin and female breast cancer. The most common cancers among men are prostrate, lung and bronchus and colorectal cancers. Women are most likely to be diagnosed with breast, lung or colorectal cancer.

One concerning trend raised by the report is a continuous increase in the female breast cancer incidence rate, which steadily rose by about 0.5% per year from 2008 to 2017. Declines in fertility rate and increases in body weight are partly to blame, the report says.

The death rates for the four leading cancers — lung, breast, colorectal and prostate —have continued their long-term declines, with lung cancer seeing the most significant decline. Lung cancer accounted for 46% of the overall decline in cancer mortality in the past five years.

Better treatment for non-small cell lung cancer has contributed significantly to the drop in lung cancer deaths, the report authors said. The two-year relative survival rate for this type of lung cancer increased from 34% to 42% between 2009 and 2016.

Dr. William G. Cance, the American Cancer Society's chief medical officer, cautioned that there is still plenty of improvements to be made.

Cancer is the leading cause of death among Hispanic, Asian Americans and Alaskan Natives. The five-year survival rate for all cancers continues to be higher in white patients than Black patients.

On a more positive note, disparities in overall cancer mortality between white and Black Americans declined from 33% in 1993 to 13% in 2018.

"While recent advances in treatment for lung cancer and several other cancers are reason to celebrate, it is concerning to see the persistent racial, socioeconomic and geographic disparities for highly preventable cancers," Cance said.

"There is a continued need for increased investment in equitable cancer control interventions and clinical research to create more advanced treatment options to help accelerate progress in the fight against cancer."