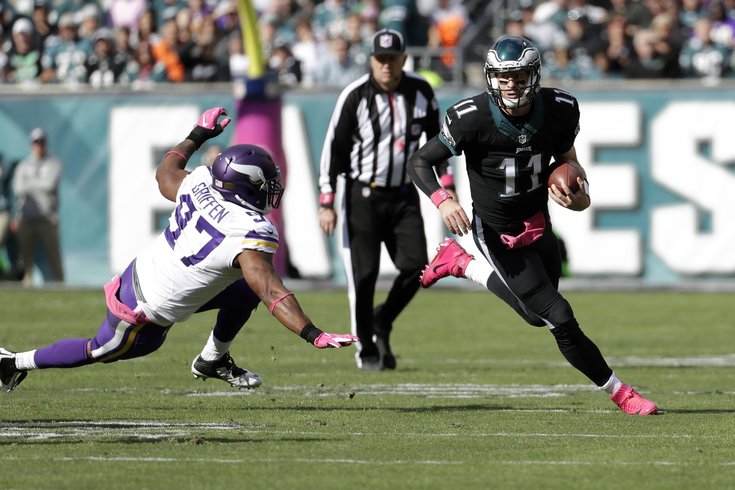 Philadelphia Eagles QB Carson Wentz picks up the first down after a bobbled snap nearly cost them on fourth down.

One of the many skills that Carson Wentz has put on display during his first five games in the NFL is his ability to improvise and gain positive yards after the originally called play has either run its course or been derailed by a miscue, poor blocking or some other obstacle that wasn't expected before the ball was snapped.

Perhaps the finest example of this came against the Steelers, when Wentz avoided a rush up the middle, rolled to his right, directed safety valve Darren Sproles to break his route and turn upfield, and then lobbed a perfect ball to his running back.

Sproles did the rest, taking it 73 yards for a back-breaking touchdown in the 34-3 win over Pittsburgh.

But what about the times when things really break down? When, say, there's a botched snap causing mayhem all over the place?

Wentz, despite his worst game of the season on Sunday, isn't "most quarterbacks" -- he does neither of those things. More often than not, he's able to not only regain possession of the ball, but also turns the broken play into positive yardage.

That was on full display during the Eagles' 21-10 win over the Vikings, in large part due to some ugly exchanges between Wentz and center Jason Kelce. Wentz officially fumbled the ball three times on Sunday, including his first lost fumble of the season, but there were also a few other times that the exchange didn't look clean, including on a big fourth down play late in the first half.

“I’m not really sure," Wentz said when asked why it seemed like so many snaps were hitting the ground. "Some of them, I’ve got to clean up – I have to just catch the ball, for starters. Some of them were a little off, but those are the things we have to clean up. Don’t put too much stock in them. Obviously, we have to clean it up, but Kelce and I have had a good connection, so I think we’ll be fine with that.”

Watching it live, it sure looked like the bulk of the blame belonged with Kelce. But after hearing from Wentz and Pederson, it doesn't seem so cut and dry.

"A little bit center, a lot of it quarterback actually," Pederson said on Monday when asked what was the problem snapping the ball. "It's something as a quarterback – again, [Wentz] just took his eyes off the ball, was looking at his read, whether it was a defensive line or a linebacker, and just didn't secure the football.

"Kelce wasn't perfect. The balls were off to the right just a touch and so it was a little bit of the center, a little bit more of the quarterback just taking his eyes off the ball."

Luckily for the Eagles, however, it seems their quarterback is uniquely qualified to make something out of nothing – or, in this case, out of less than nothing.

On the season, Wentz has fumbled the ball six times. Three of those, he's recovered himself. Two were recovered by Darren Sproles. And one, the first of his three on Sunday, was recovered by the other team.

Half of those plays, however, actually resulted in positive yardage for the Eagles. One resulted in no gain, one in a four yard loss, and, of course, one in a turnover. Taking out the one turnover, the Eagles have gained close to fifteen net yards on those play. Furthermore, in situations where Wentz has recovered his own fumble, the rookie is 2/3 for 18 yards.

And that doesn't even include his near fumble on 4th & 2 against the Vikings that also required a bit of improvisation.

So let's look at the times Wentz's fumbles didn't result in turnovers to see how the 23-year-old has been able to overcome some sloppy football.

This was probably the most dangerous play Wentz made all season (at least in one of these broken-play situations). I wouldn't have hated to see him just throw it away here, but CB Joe Haden made a hell of a play to break up the pass. Also, check out how quickly Wentz goes from looking down at the ball to finding Matthews down the sideline. Given how quickly Lane Johnson's man was bearing down on him, he needed to get the ball out immediately, but that's something else.

This time, it looked like Wentz had some better protection. However, once the ball hits the ground, he can't be expected to know that he's still got time in the pocket. At that point, all bets are off. And, wisely, Wentz finds his check down receiver immediately and picks up two yards.

In case you're wondering, this drive resulted in an Eagles touchdown.

This was the almost fumble that I alluded to earlier. And while it didn't impact the play as much as some of the other examples listed here, it did come in a big spot, and it almost immediately took the "option" out of the run-pass option play that was called.

“It was an RPO, so run-pass option," Wentz said after the game. "With the bad snap, we just had to improvise and make the play and luckily we converted it.”

This drive resulted in the Eagles getting a field goal just before the half to take an 11-3 lead into the locker room.

This was reminiscent of the 73-yard score against the Steelers, and of the plays listed here is by far the best example of what Wentz can do with what can only be described as the holy trinity of QB skills – the arm to make any throw, the legs to buy yourself the time to make that throw, and the brainpower to quickly decide which throw, if any, to make.

And, believe it or not, this isn't the last botched snap on this drive alone.

Sproles picks up (the ball and) a yard

A few play after that first-down pass to Sproles, Wentz fumbled another snap. This time, it was Sproles who was first to the ball and he managed to fall forward for maybe a yard. More importantly for the Birds, he didn't let the Vikings scoop it up, which would've been a devastating red zone turnover in what, at the time, was still a one-possession game.

And on the very next play...

Sam Bradford and the Vikings were never really in the game after that.

So, while you obviously don't want to see your quarterback fumble as often as Wentz did against the Vikings, it's nice to know that there's at least a 50 percent chance that play results in something positive for the Eagles.