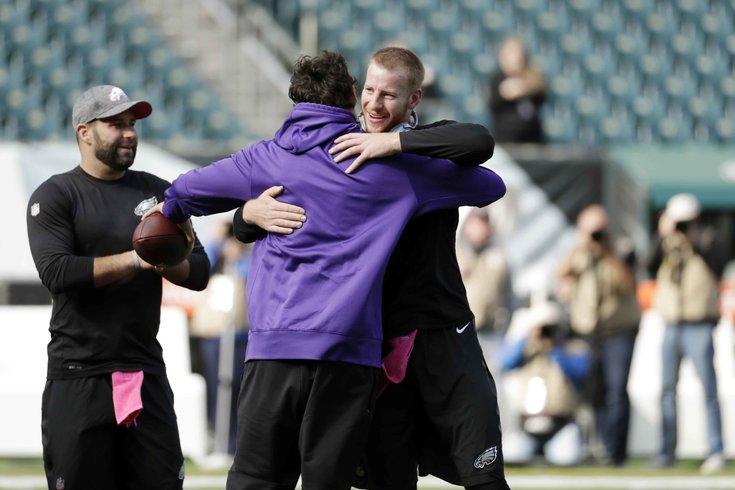 Carson Wentz and Sam Bradford share a hug while Chase Daniel is left out again.

The Philadelphia Eagles entered their Week 7 showdown against former friend Sam Bradford, AKA Sammy Sleeves, AKA Sleevie Wonder, up against the ropes, in dire need of a win to keep pace in the surprisingly competitive NFC East. And win they did, convincingly, while battering Sleevie throughout the day.

Yeah, so that's what ol' Sleevie looked like quite a bit last season with the Eagles here at Lincoln Financial Field, except this time the Eagles were beneficiaries for a change. On the day, Sleeves was 24 of 41 for 224 yards (5.5 YPA), 1 garbage time TD, 2 INTs, and 4 fumbles. It was by far his worst outing of the season.

During their five-game win streak to begin the season, Bradford wasn't asked to do much. It was his job to let the defense win ballgames, and just don't mess it up offensively. Granted, he didn't get much help from his offensive line today, but this afternoon's game is kind of what Bradford looks like when you need him to carry your football team.

2) The Bully Award: Jim Schwartz and the Eagles' pass rush

The Eagles' defensive absolutely dominated the Vikings' offensive line all day, especially in the passing game. On the day, the Eagles had six sacks, 12 QB hits, 9 passes defensed, 6 tackles for loss, and 4 forced fumbles. Schwartz dialed up more blitzes than he has all season long, and called them at the right times, harassing Bradford all day.

Through the first five games, Josh Huff's stats were kind of comical. He has 8 catches for 24 yards, (a 3.0 YPC average), and his long catch on the season was 11 yards. Take away that 11-yard reception, and he had 7 catches for 13 yards.

Today, Huff made a huge play on special teams, returning a kickoff 98 yards for a score.

He also added four catches on four targets for 39 yards in the "passing game," if that's what you'd call those little pre-snap motion dump-offs.

Huff is never going to run routes like Antonio Brown or have hands like Jason Avant, to put it kindly. But every once in while he has a game like this, and you kind of second guess his value.

On a side note, Huff didn't even bother trying to make a move on the kicker on his TD return. He just ran right through him, Brian Mitchell-style.

After the Eagles' first touchdown, the Eagles lined up to kick the PAT, which they made, except the Vikings were called for a penalty on the play. Rather than just keep the point, Pederson opted to take the point off the board and go for two, which they made.

"It's kind of a no-brainer, because you get the ball at the one, half the distance from (the two)," said Pederson.

That's not the most eloquent explanation, but it works for me. Pederson was then told that many other coaches don't necessarily view that as a no-brainer call.

Pederson was then further pressed on if it was wise to take a point off the board to go for two.

"I got your extra point right here, bozo," he said, while making the following motion at the podium.

As noted above, Sam Bradford had his worst game of the season this afternoon. So did Carson Wentz.

All season long, the Vikings have made quarterbacks look really bad. Wentz was no different:

Still, this was an unusually bad performance today by Wentz, who made some very poor decisions early on that led to a pair of interceptions. Wentz did make enough plays to extend the lead that the Eagles were given on Huff's kick return, but overall it was obviously not his best day.

After fumbling in an inexcusable situation for the second time in three weeks, I'm told the Eagles have fired RB Ryan Mathews into the sun.

7) The Exposed Award: The Vikings

As noted above, the Eagles' defensive line bullied the Vikings' offensive line all day. That was due mainly in part to the Vikings missing both of their offensive tackles, Matt Kalil and Andre Smith, who were both placed on IR and are done for the season.

"When their starters aren't in, you gotta make sure you expose areas where we think they're weak," said Brandon Graham. "Sometimes they're not as weak as we think, but I feel like we got after it a little bit, especially on the edge."

The Vikings still have that great defense, but they are going to struggle protecting Sam Bradford against strong pass rushes for the remainder of the season. That's good news for the Eagles, who own the Vikings' first-round pick.

While Jordan Hicks has had a very good season so far, he has not yet produced the eye-popping numbers that he did in his rookie season. That changed today. Hicks' stat line on the day: 11 tackles, 1 sack, 3 tackles for loss, and 2 pass breakups. Hicks was everywhere today, as he clearly had his best performance of the season.

9) The Point Differential Award: The Eagles

For as shaky as they have looked at times, the Eagles once again lead the NFL in point differential, at +68, at least as of the conclusion of early afternoon games.

10) The First Place Showdown Award: The Eagles and Cowboys

Next week is kind of a big game. The Eagles will travel to Dallas to face the Cowboys for first place in the NFC East. Here are the NFC East standings after Week 7: