Carson Wentz 'would love to play tomorrow,' but will settle for preseason finale 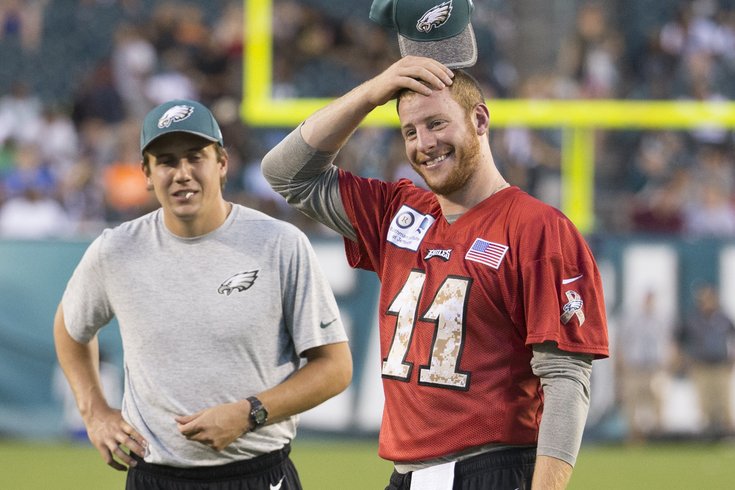 The most exciting storyline of Eagles training was put on hold Saturday when news came down that rookie quarterback Carson Wentz suffered a hairline fracture in his ribs during the team's preseason opener against the Buccaneers.

Sunday night, Doug Pederson's team was back on the field at the Linc for the final open practice of the summer, and although Wentz was in shorts rather than pads, the second-overall pick in the draft sounded optimistic about his injury and when he may be able to return.

“The goal is hopefully still in preseason I’ll be ready to go," said Wentz, who hasn't been given a timetable for his return. "But you never know with these things, so we’ll have to see."

The 23-year-old out of North Dakota state will have to wait to be cleared by doctors before returning to contact and game situations, which could be anywhere from two to four weeks. In the meantime, Wentz said he hopes to take as many "mental reps" as possible, but the decision to return to practice is almost entirely dependent on how his ribs feel and if there is any pain when he tries to throw.

With how much they've already invested in him, the team isn't likely to rush Wentz back on the field, but each passing preseason game is a missed opportunity to get the rookie valuable game experience.

"I really hope [I’ll be back for the final preseason game]," he added. "Heck, I would love to play tomorrow. That’s kind of how I am. We’ll have to wait and see what the doctors recommend.”

Wentz also said that this was the first rib injury he's ever suffered and that he "didn't realize how much it hurt" until he tried to practice on Saturday. That's when he was taken for x-rays and a CT scan and doctors discovered the extent of the injury.

Welcome to the NFL.