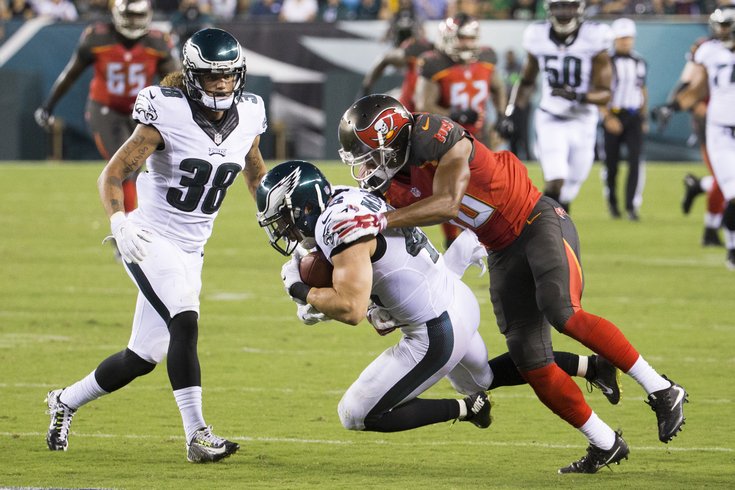 Prior to the Eagles second (and last) open practice of training camp, defensive coordinator Jim Schwartz met with the media to talk about how his unit played in Thursday night's preseason opener against the Bucs and what he hopes to see out of them moving forward.

Overall, Schwartz was happy with how his defense played, which isn't surprising when you consider that it gave up just nine points all night and committed just two penalties. It also forced four turnovers (plus a fifth by the special teams) in the 17-9 win and were able to stop Tampa late in the fourth quarter to seal the victory thanks to one of those takeaways -- C.J. Smith intercepted Ryan Griffin in the end zone with less than a minute remaining.

Here's a look at some of the more interesting things Schwartz was asked about at the Linc on Sunday night:

As we said, Schwartz was happy with how the defense played against the Bucs, and there really isn't any reason to feel otherwise.

"I'll just say, as a defense, we held them to nine points and that's the bottom line with anything," Schwartz said. "I think one thing that I was very encouraged by, particularly for a first preseason game, is we only had two defensive penalties. ...

"But typically in a first preseason game, you're trying to put a lot of fires out with guys. And usually, penalties come from either guy that don't know what to do or guys that are in bad position. And we had very little of that, and I was proud of the guys for that."

Individually, however, there were some miscues that the certain players will need to work on in order to earn a spot on this team. But as Schwartz would go on to say, there were reasons for some of those mistakes -- like guys pulling double-duty on defense and special teams, something that won't be happening as much (if at all) once the games actually count.

One of the players Schwartz mentioned specifically was rookie cornerback Jalen Mills, who didn't have his best showing against the Bucs. [I know, that was an awesome transition; my former journalism professors would be proud.]

"He was out there covering just about all those kicks," Schwartz said. "It's tough, you're running 60 yards down the field, and then all of a sudden you're out there playing defense again. We were putting him in some tough situations. We were calling a little bit to try to evaluate some guys. We weren't protecting guys.

"[We are] not disappointed in him at all. It was a tough situation. It was what it was."

Schwartz also talked about the depth at linebacker, which he classified as "not a lot." Again, the Eagles coordinator said it was somewhat hard to assess their play because some guys were overly tired after covering punts.

"It's still early in the preseason [to assess the linebacker depth]. It's really too hard to tell," Schwartz said. "It was difficult the way the game went just because we scored twice real quick on short fields. And we had a couple special teams plays – two kickoffs right in a row – and then we had a bunch of punts right in a row.

"So, that was difficult on a lot of those backup guys that ended up playing once they got to the second quarter. A situation they are probably not in a real game because if they are covering kicks, they are probably not playing as much defense. So, what they had to do was they had to cover a bunch of kicks and play a lot of defense. So, it really wasn't a realistic, a true game situation right there. So, it's hard to read too much into it. But it taxed those guys a lot. It was tough on them."

Given his size and physicality -- not to mention that he occasionally played the position in college -- there's some thought that the Eagles could try moving the second-year defensive back to safety, especially since there are at least three cornerbacks ahead of him on the depth chart (Leodis McKelvin, Ron Brooks and Nolan Carroll).

"[Rowe's] a guy that could do that. He did in college a little bit. He played both of both positions ... that's one of the things that's helped him is being able to drop down and cover."

"In this league now, so many tight ends are skilled; so many times you have personnel matchups. If the team lines up in three wide receivers and you're in base defense, one of your safeties has got to go cover a wide receiver. That is something he could potentially do."

That being said, Schwartz and the Eagles still like what he has to offer on the outside, and if they're thinking long-term -- Carroll is on a one-year deal, McKelvin is on a two-year deal and Brooks in on a three-year deal -- then they may want keep him at corner and allow him to more fully develop there.

"We like his skill set at corner," Schwartz added. "He's tall; he's hard to throw over; he's tough at the line of scrimmage. There are some other things he's working on, and he just needs to improve those other things. Again, we're still talking about a very young player there."

Pederson and offensive coordinator Frank Reich have been showing a lot of three tight end sets this summer, and it paid off for them on Thursday night when they used it on the first-quarter touchdown run. Schwartz was asked about defending that and how he thinks it'll help his offensive counterpart in the upcoming season.

"You know, tight ends are tough matchups, particularly guys that are multi-dimensional," Schwartz said. "I think we've probably beaten that horse a little bit dead right now, but it's true.

And how exactly does that give opposing defenses trouble?

Apparently, Schwartz used to do a bit of research on his own to determine certain trends in order to gain the upper hand. It probably shouldn't be that surprising given that he went to Georgetown, but I found the back and forth to be interesting, even if it wasn't all that illuminating.

Q. Early in your career, you talked about how you studied fumbles and how they correlate to wins. I was wondering if you’ve done any studies on football trends like that more recently.

SCHWARTZ: Yeah, I mean, we try to stay … And the thing that's interesting here is I used to be a one-man shop when it came to stuff like that. We have a whole department that researches things like that.

I'm not sure what to make of this quote other than the funny visual of Schwartz locked in his office trying to figure out the secret to building the perfect defense and then trying to explain that research to his general manager...

As for those recent trends he's been analyzing?

"I don't think it does anybody any good to advertise some things maybe other teams aren't aware of [or] some new trends and things like that," he added. "I hate to be boring, but I think I'll just take that approach."