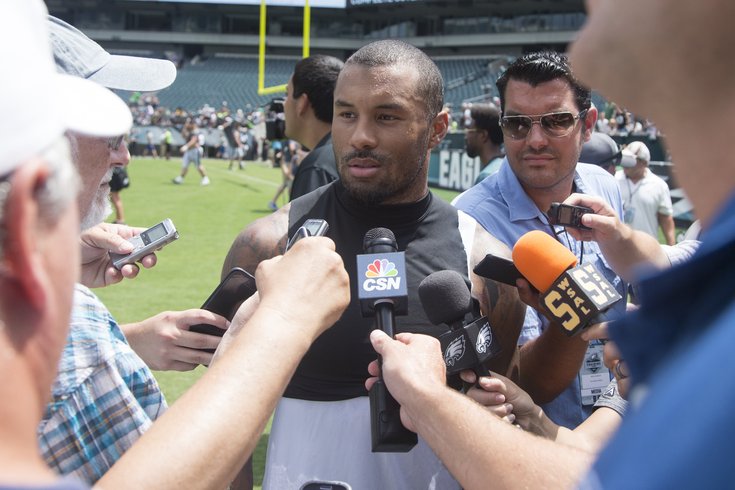 Nolan Carroll got first team reps with the base defense today.

The Philadelphia Eagles held their second and final open practice in front of fans at Lincoln Financial Field Sunday night. Here's what we saw:

• The most notable change in playing time tonight came at the corner spot. All throughout OTAs, minicamp, and the first three weeks of training camp, CB Ron Brooks was running with the first team in the base defense. When the Eagles went to a nickel look, another corner would come in (most often Nolan Carroll) and play on the outside, with Ron Brooks moving inside to cover the slot. Today, for the first time, Carroll got first team reps in the base defense, with Brooks coming in off the bench in nickel sets to play the slot.

In my view, this is the way the Eagles should go. Outside corner and slot corner are different enough that it's difficult to toggle back and forth between the two, in-game. The Eagles asked Byron Maxwell to play both on the outside and in the slot early in the season a year ago, and the results were not good. Asking Brooks to do both would be putting a lot of responsibility on a player with three career starts.

As we wrote earlier, the Eagles reportedly talked to former Giants OT Will Beatty.

• It appeared as though McLeod Bethel-Thompson was getting all the reps that Carson Wentz would have gotten if he hadn't broken a rib, meaning he got a similar number of reps as Sam Bradford and Chase Daniel. I don't understand why you'd give an equal number of reps to a guy who has a near 0% chance of making the team.

• After the Eagles' first preseason game, we published a harsh review of Rueben Randle's lack of effort. Today, Ruebs had a few nice grabs for touchdowns, which we reported.

And now an awful drop by Ruebs, lol.

• The Eagles ran a play in which a wide receiver threw to a streaking Daniel down the sideline. Twice. I'd probably put that play idea back in the shed.

• Fletcher Cox lined up in a two-point stance (standing up) on the edge a few times today. There was also an interesting moment during Jim Schwartz's press conference today. A reporter noted that undrafted rookie Aziz Shittu said that defensive tackles have the liberty to call stunts on their own, and asked Schwartz about it.

• We don't often mention him in notes because everyone already knows what he is, but Darren Sproles had a really good day. He made a lot of catches and showed a decent burst. Nigel Bradham has been getting smoked by Sproles a lot of late, although most linebackers have no prayer of sticking with him. Sproles joined in on the drop brigade a season ago, but he has done well catching the football this camp.

• Sticking with the running backs, Ryan Mathews looks good too. On a run around the edge, Mathews showed an impressive burst. When healthy (obligatory preface) Mathews is a fast, powerful runner.

• In OL-DL 1-on-1 drills, the highlight came when Bennie Logan put Josh Andrews on his ass. Logan had a nice moment in the Bucs preseason game when he soundly beat his man and planted Jameis Winston into the turf on Cox's sack/FF/FR. Beau Allen was impressive in 1-on-1's today as well. At one point I wondered if Allen would make the roster, but he feels like a near-lock at this point.

• The Eagles had camo jerseys on today, and the Eagles misspelled poor JaCorey Shepherd's name. They spelled it "Shephard."

Quick quiz: Spell Lito's and Russell's versions of Shepherd. (Answer key at the bottom of the post). The difference of six kicks (34 makes for Sturgis, 28 for Parkey) is significant. As long as Caleb Sturgis remains consistent in the preseason games, he has put enough distance between himself and Cody Parkey in training camp to win the job.