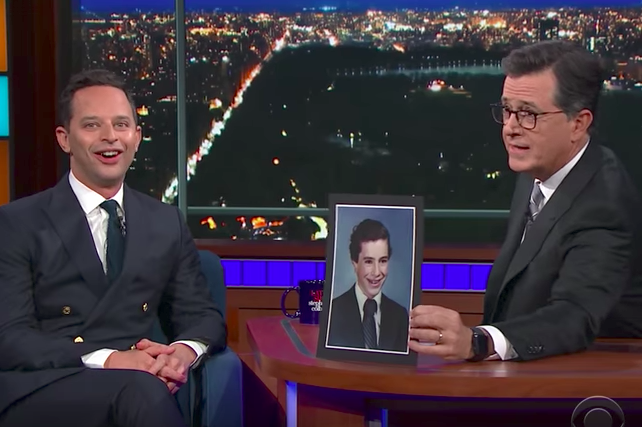 Actor Nick Kroll has a laugh as host Stephen Colbert shows a pubescent picture of himself in an episode of The Late Show on Wednesday night. Colbert said his Americone Dream ice cream fund would donate $1,000 to the hurricane relief effort in Puerto Rico for each awkward pubescent-phase picture celebrities post on Twitter with the hashtag "PuberMe."

Social media got awkward for a charitable cause this week.

Thanks to an effort kicked off by Late Show host Stephen Colbert and his guest Wednesday night, actor Nick Kroll, celebrities promptly flooded Twitter with pictures from their pubescent years to raise funds for the ongoing disaster relief efforts in Puerto Rico, which was devastated last week by Hurricane Maria.

Naturally, Colbert and Kroll then shared their own pubescent photos on the air and launched the hashtag "PuberMe," inviting celebrities to join in.

Nick Kroll asked me to post a pic of my awkward stage, but I never had one. So here's me lookin' cool as hell! #PuberMe #PuertoRicoRelief pic.twitter.com/UC9a7XtjZa

Thank you Stephen. In return, here's me trying to look like a tough guy because I hadn't yet hit #puberme. #PuertoRicoRelief pic.twitter.com/WAzZ6kk6qb

Colbert then suggested using the game for a nice cause.

"Let's make this interesting," Colbert said. "For every celebrity that puts up puberty picture of when they're 13, I'll give a donation."

"And I'll match that donation," Kroll said, prompting an ovation from the audience.

Colbert's Americone Dream fund is set to donate $1,000 for each celebrity photo that includes the hashtags "PuberMe" and "PuberRicoRelief," he said, although he had the right to decide who is and isn't a celebrity.

Here are a few of the super awkward photos broadcast to the world this week for charity:

@StephenAtHome @nickkroll This photo brought to you by Sun-In ™ and my grandma’s Liz Claiborne separates. #PuberMe #PuertoRicoRelief pic.twitter.com/x2m2sAs4zE

Found this in the Connie Seacrest archives under “awkward phase” #puberme #puertoricorelief pic.twitter.com/29xGMMygpz

And you wonder why I didn't lose my virginity until I was 20...#PuberMe pic.twitter.com/h60fzur2Kn

Hey, @StephenAtHome, for your #PuberMe #PuertoRicoRelief effort, I give you...the nuclear option... pic.twitter.com/0QhZYD4REU

Hey @StephenAtHome + @nickkroll here's me at 14 in my mum and dad's back garden for my first ever photo shoot. #PuberMe #PuertoRicoRelief pic.twitter.com/lkj0fQbfpu