Chase Utley, mired in ugly postseason slump, one win away from returning to World Series

Even with their one-run loss to the Chicago Cubs late Wednesday night, the Los Angeles Dodgers are one win away from advancing to the World Series. Up 3-1 in the National League Championship Series, the Dodgers have three more chances to send former Phillies icon Chase Utley to his third World Series in the last 10 years.

With a win tonight – the Dodgers send Clayton Kershaw to the mound at Wrigley Field in a few hours – L.A. would host Game 1 of the World Series on Tuesday night. It would be Dodger Stadium’s first Fall Classic in 29 years, since the memorable ’88 World Series that starred a hobbling home run hero and a dominating playoff ace from Cherry Hill East (N.J.). High School.

The Dodgers had a chance to punch their ticket on Wednesday night, an opportunity to complete a dominating sweep over the defending World Champs, but couldn’t muster up more than a couple of solo home runs in a 3-2 loss in Game 4 of the NLCS. Utley was at the center of the team’s offensive struggles, striking out twice in the game’s last three innings, including in the eighth with two on and two out.

Utley honestly hasn’t had a whole lot of success in the postseason since being traded to the Dodgers in August of 2015. After his 0-for-3 performance on Wednesday (he reached on a hit by pitch, then grounded into a double play and struck out twice), Utley is 4-for-40 (.100) with zero extra-base hits, 13 strikeouts, and five walks in 18 playoff games with the Dodgers in the last three seasons.

Utley is currently mired in a 0-for-24 postseason slump. He’s hitless in his last 11 playoff games dating back to Game 4 of the 2016 National League Division Series.

He looked particularly bad in his first at-bat of the NLCS, a pinch-hitting appearance on Sunday night.

Then again, Utley, a Southern California native who grew up a Dodgers fan, would at least bring a pretty accomplished World Series pedigree to his lineup should the Dodgers advance.

The last time he was in a World Series (in 2009, against the Yankees) Utley tied a record held by Mr. October himself, Reggie Jackson, for the most home runs in a single World Series when he hit five in the six games between the Phils and Yankees. And in his first career World Series at-bat, in Game 1 of the ’08 Series in Tampa, Utley homered off (current teammate) Scott Kazmir to help fuel the Phillies to a 3-2 win.

All told, Utley has a career .231/.388/.795 slash line in 11 World Series games, including seven home runs, a double, nine walks, 10 strikeouts, a perfect 4-for-4 in stolen base attempts, and the most iconic defensive play of his career.

Utley has started just three of the Dodgers first seven postseason games this year, so we can’t be confident how many starts he’d get if L.A. does get to the World Series. But we can be confident about two things.

Will he retire either way?

“I’m trying to take it one day at a time but I’m still enjoying it, I’m still having fun,” Utley said of his uncertain future two months ago while in Philadelphia. “I still feel like I can contribute out there, so I’m not looking too far ahead.”

The other certainty: there will be more stories about perhaps the greatest asset Utley has brought to the Dodgers, his leadership inside the clubhouse. Both Jerry Crasnick of ESPN.com and Bob Nightengale of USA TODAY have written interesting stories regarding Utley’s influence in the last 14 months.

From the Crasnick story (which you really should read) earlier this month:

“He’s kind of the quiet leader of the team. I think everybody looks up to him and wants to play the right way to please him. There's a level of accountability he creates within the team.”

“I've had my moments where he said something to me -- not in an attacking way -- and you feel bad because you disappointed him. He’s able to do it the right way, without screaming and yelling and getting in somebody's face, and I think that's the perfect way to keep a team moving in the right direction. You don't ever want to disappoint Chase. That's a good word for it. He sees everything, even when you don't think he's looking.”

Sounds like a guy who, even if he retires this winter, could be of some use on a coaching staff, huh?

The Arizona Fall League has been underway for a little over a week and a Phillies pitching prospect who was easy to forget about for most of the summer is making an impression early.

Left-hander Elniery Garcia struck out five while walking one and allowing just one hit in four shutout innings to lead the Glendale Desert Dogs to a 2-0 win on Monday night. According to a report out of Mesa, Ariz., from MLB.com's Jim Callis, Garcia threw 37 of his 54 pitchers for strikes and showcased a fastball that sat in the 89-92 range and a curveball that accounted for three of his five strikeouts.

The 22-year-old Garcia was considered one of the organization’s rising prospects this time last year after going 12-4 with a 2.68 ERA in 20 games (19 starts) at Class A Clearwater. He was added to the 40-man roster last November.

But Garcia began the 2017 season on the disabled list and was then levied an 80-game suspension in mid-April for testing positive for a banned substance. Garcia was limited to only seven starts this season (five at Double-A Reading) but is probably a lock to stay on the 40-man roster this winter.

The Phillies just completed their first season since 1918 without a single start from a left-handed pitcher. If Garcia can reconnect with his 2016 success early into 2018, he could possibly make a quick jump to the big leagues and perhaps end their southpaw drought, too.

Two months ago, Garcia credited Roy Halladay with help getting his head right while rehabbing in Clearwater, Fla., shortly after his suspension.

“I didn’t want to feel bad for myself, and I just tried to stay positive,” Garcia told Philly.com. “He told me to put my head down and keep fighting because these are things that we go through in our career. He was a huge help.”

The 2017 winner of the prestigious Roberto Clemente Award will be announced before the end of the month, during the World Series. The Phillies' nominee this year is veterans catcher Cameron Rupp.

In addition to working with the team’s efforts in fighting ALS and also helping Philadelphia’s disaster preparedness, the 29-year-old Rupp began a partnership with the Pennsylvania Society for the Prevention of Cruelty to Animals within the last year, including hosting his first charity event, Ruppapalooza, in July. The event raised more than $30,000 toward the PSPCA’s efforts.

But since that event, and shortly after the Phillies season drew to a close, there’s been an addendum to Rupp’s story. Toward the end of last month, the PSPCA found a two-year-old Cane Corso hog-tied outside their North Philadelphia headquarters.

After visiting the abandoned dog a handful of times, Rupp decided to take her home: he adopted “Lola” last week. 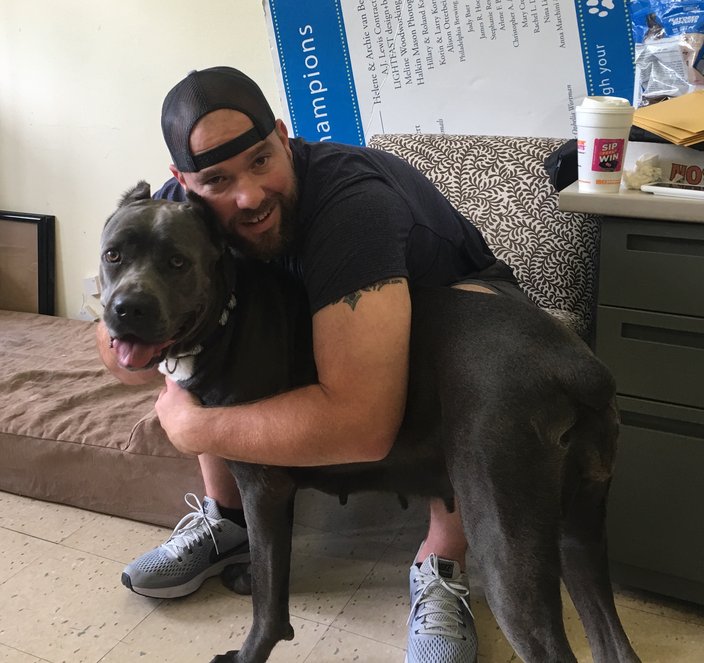