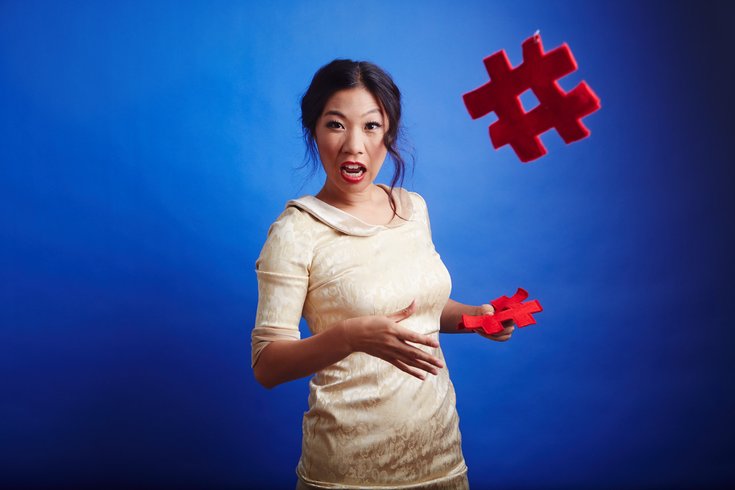 Kristina Wong throws a felt hashtag as part of her performance-art piece "The Wong Street Journal." All of the show's props and set were sewn with felt.

Though the name's catchy, know this up front: "The Wong Street Journal" isn't really about economics.

What the 85-minute play does is tell the story of a semi-fictionalized version of comedian and performance artist Kristina Wong, a third-generation Asian-American artist who flew to Uganda in 2013 for three weeks to volunteer for the Women's Global Empowerment Fund – what Wong describes as a sincere but naive mission to change the world in less than a month.

The one-woman show is a comedic retelling of her experiences as an Asian-American woman in Africa, one that both critiques her counterintuitive "white savior" attitude upon arrival and the ceaseless army of "Gotcha!" social-media activists who pounced on her every tweet and Facebook post while there.

"The Wong Street Journal" premiered last summer in Wong's native San Francisco and comes to the Kimmel Center on Thursday through Saturday, billed as part of Philadelphia International Festival of the Arts 2016.

In it, Wong arms herself with a felt iPad and acts, jokes and raps her way through her three-week journey as a social-media-obsessed artist turned philanthropist deftly tackling serious subjects like poverty and global economics with subversive humor.

Here, Wong talks about her trip to Uganda, sewing hashtags in felt and what she's working on next.

How did 'The Wong Street Journal' come about?

I had come up with this title 'Wong Street Journal' through this Facebook poll, and I said ‘I want to do a show about the economy. Maybe it will be about global economics, maybe about poverty' – it was so broad. But I wanted to do something about what I don't know, and way back when I had thought, ‘This will be an excuse to learn about the stock market; I’ll get real smart about it and become rich.’

I was so jumbled and it was so crazy, and eventually I thought ‘I’ll go to Africa and research it.’ I’d never had that Peace Corps experience. It’s very much an experience for college kids to go to some poor country and volunteer, and I never got that experience. I was in my 30s and feeling very jaded and unhappy in my field. You work so insanely hard on these shows and only a few people come, and then you see these people who write blogs with clickbait about old-hat topics, and everyone’s all up on it like they’ve just discovered something when it’s the wheel that’s been reinvented.

So, this all leads to basically this character I play out in the show. The first 20 minutes of the show you meet Kristina Wong, who is a social-media activist, who also used to do theater but used to do things very nuanced. I present a bar chart and there is a small stack and a tall stack on the bar chart; the small stack is my audience for [my performance piece] ‘Wong Flew Over the Cuckoo’s Nest,’ and the tall stack is the shares I got from an essay on xoJane I wrote called ‘9 wack things white guys say to deny their Asian fetish,’ which was a smart essay but [only popular because] of the crazy title. No one reads on the Internet anymore. Everything has to be in that first paragraph and the title. People share stuff without even reading it.

So, I sort of describe it like, ‘Yes, I can keep providing nuanced experiences, but look at how big my following is, my empire is with all these clickbait essays and all the tweets I send and followers I get from Twitter,’ and this becomes very empty for this character very quickly. I have a hashtag war with the audience and get them to throw them around and say ‘Look, we’re saving the world! Send them around!’ It’s fun for the audience. And then I eventually have a moment in the show where I say, ‘This is the legacy I’m going to leave in the world? Hashtags, Twitter followers and YouTube viewers? There has to be more to life than this.’

This leads me to want to do something bigger and more important, which is how I end up going to Uganda to volunteer with a microloan organization.

Why did you decide to incorporate the 'hashtag war'?

Exercising a Facebook war was the trickiest thing, which is what I did with the hashtag war and the charts. I don’t think anything is more boring than someone recapping a fight they had on Facebook. So I was trying to figure out how to do this.

It led to creating a felt set, creating all these hashtags. I was talking to my director, working on the show as an artist residency, and I was saying, 'I don’t know how to paint this picture of this jaded social-media activist who goes to Africa and realizes she’s the problem she’s critiquing.' But I’d sewn most of my life. ‘What if I make giant hashtags out of felt and we throw them around like ninja stars?’ And that was this great 'Aha!' moment.

What kind of reactions did you get on social media while in Uganda?

They just kept dropping the word ‘problematic’ in my comments section, but I know everything is problematic. Everything about being there as a westerner is problematic! It’s almost impossible for me to take a photo with me and African people without people reading into the narrative of me as a white savior, or me presenting that photo people do when they go abroad and are helping.

There’s almost this inherent narrative of Africa as this helpless, chaotic, dark continent, and my experience in some of the stories I tell – I set it up very well, I think. Preparing for Africa and all these warnings people gave me: ‘You have to be so careful! Oh that’s so brave!' or 'It’s so sad there, people are starving! Oh God! Are they at war now?’ People were sending me warnings about a bombing in Kenya – a different country. A whole border away. And it’s like ‘I don’t know what you want me to do. I appreciate the warnings but this is a different country.’ It’s this monolith Africa is read as.

That’s a great point of humor in the show. I poke fun at all these stereotypes we have of the African continent. How fearful we are, and how much we assume it's this place where, you know, the narratives we have of all the ‘Save the Children’ commercials, all these barefoot kids running around for TOMS shoes and celebrities waiting to adopt babies. And so any photo I took out there [was a problem], I took a photo of my Ugandan friend's wife and kid and someone said, ‘This is problematic.’

What do you want audiences to take away from the show?

I feel like I’m presenting myself as someone who is actually presenting a lot of her own naiveness, who comes to a much better place and learns to be a better ally for social justice, and I feel that journey is one you don’t get to see a lot.

It created a culture online where people become so afraid to share ‘I don’t know, I don’t know how to work through this.’ And the only way, it seems like, to be able to overcome it, is to be the bully back and go, ‘Well, if I keep calling out other people no one will call me out.’

Who would you say you wrote this for?

I think a lot of my own family. Some of the people who were totally like, ‘Be careful!’ My mother, who doesn't even pray, was like 'I’m going to pray to the gods for you. You have to check in every day!’ She was so convinced. Now they’re actually planning a vacation to Africa; 'We watched the show and now I feel like we can go.’

I feel like, in ways, I approach it thinking about the most naive audience member in the room, and I have to break down some very basic things that, for other people, they might be like, ‘We know this. We know Africa is not a country and is not a monolith.’ I think about them a lot. I think a lot about the people who went to war with me on social media, and the activist fighting on Twitter all day starting campaigns that don’t leave Twitter who are quick to attack people and demand apologies.

Sometimes, people do need to acknowledge they’re saying ignorant things, but I feel like it can be a very hostile environment to make a mistake. There’s no room for nuance, no room for conversation or growth online. I feel like the culture of online activism feels like hazing, and if you’re wrong you’re really wrong.

What are you working on next?

I have a musical I’ve worked on about China and Vermont. I've never been to my motherland of China. I'm a third-gen Chinese-American, but I am obsessed with the state of Vermont.

I did a show in Burlington last year and met someone on Tinder and briefly nursed this fantasy of my life. I just love that Vermont is so counter to the culture of big-city living, of big-box culture. When I started writing this musical I thought, naively, ‘Maybe this will give me an excuse to keep seeing this person I met over there.' And it more became this idea of homeland, and this idea that when I go back to China, it’s going to look nothing like what my grandparents escaped, and Vermont to me feels sort of, it’s a white homeland, but it conjures that nostalgia that I think comes up when I hear people talk about the homeland.

So, I started writing this strange musical about a Chinese-American character who has moved to Vermont and is inexplicably digging a tunnel under her home, and she meets a Chinese person from a factory in China who is also digging an escape hole. They meet in the middle and can’t escape through the Vermont side because it gets blocked. So, they escape back into the Chinese factory she runs from in Vermont drag – as Ben & Jerry – and attempt to liberate all the factory workers from socialism.

I’m working on a video project and some TV stuff. Definitely a full plate, but it’s been a long way here.

"The Wong Street Journal" makes its Philadelphia premiere at the Kimmel Center on Thursday at 8 p.m.