What arts & culture development may look like under Kenney 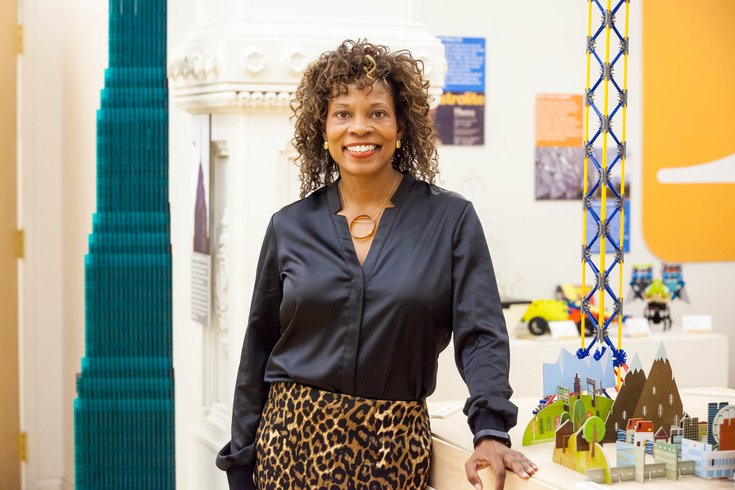 Chief Cultural Officer, Kelly Lee stands in the Constructing Play exhibition at the Mayor's Office of Arts, Culture and the Creative Economy.

With a new mayoral administration comes a new Chief Cultural Officer in the form of Kelly Lee, a 49-year-old Germantown native who previously served as CEO of now-defunct Innovation Philadelphia, communications director for the Pennsylvania Convention Center and director of economic development for PECO.

Lee succeeds Helen Haynes in the position and joins an office that is essentially still in its infancy, re-established by Mayor Michael Nutter in 2008. Its official role is to promote the city's cultural scene to the world, develop it as an economic engine, provide resources to artists and provide access to the greatest number of Philadelphians possible -- though, its actual function is still in flux.

With all that in mind, we used the transition as a window of opportunity to catch up with Lee about what the office has set its sights on, how it can address the needs of Philadelphia's arts and culture community and whether there might be a Philly arts conference down the line.

For starters, stepping into the role of Chief Cultural Officer, what do you think the role has been in the past, and what do you see it as now?

Well, the role of the office and Chief Cultural Officer has always been to promote and support Philadelphia’s cultural sector. I think there’s been a lot of good work and studies to understand the impact, developing programs based on trying to help the sector to grow. This is my 14th working day in, but I think one of the places we see this office can possibly play a role where it has not done so in the past, is really trying to work with cultural institutions, organizations and with the school district and the Mayor’s Office of Education to try and figure out ways to provide meaningful cultural experiences in communities, and to Philadelphia’s children, inside the schools or outside the schools.

And, realizing there are not a lot of financial resources to do that, how do we develop programs and work together and leverage existing resources to sort of develop some programming to provide more people access to creative experiences? That’s the direction we may be going in, in trying to fill that void, in addition to continuing to do some of the other work that’s been started and they’ve been doing since 2008 when [the office] was re-established.

In terms of funding, there’s been a demand for an expansion of the Cultural Fund. Any long-term plan for that?

For example, the development role has a lot of turnover in these organizations -- especially smaller ones, because they might be good at it and so hopefully they get a job at a larger one, so there’s a lot of churn in development in the nonprofit cultural sector. So how do we do some sort of professional development to help with retention of good development offices at these organizations? How do we give tools to executive directors, or other positions, in these institutions that stay a lot longer? So that whatever tools they learn they can have some time to actually use them and hopefully get a positive return on that investment? How do we help these cultural groups use some of this data they have – tickets, who’s seeing their performances – in order to develop more targeted development strategies?

If their goal is to have a quality, talented workforce, then supporting arts and cultural institutions on the nonprofit side is one way you can do that.

I think it also ties into what I talked about before, which is giving young people cultural experiences. The way you help in individual giving – getting to the question – in a long-term strategy, is you attract younger people into the world of arts and culture earlier so they become attracted to it through this exposure, become participants and hopefully become future financial supporters of these institutions. But hopefully, bring in younger audiences, too.

According to the Greater Philadelphia Cultural Alliance's 2014 portfolio report, only 2.2 percent of arts revenue comes directly from corporations. Thinking about young people, Millennials and the emerging tech industry, in particular, that’s probably a low number for a group of people who probably have some money to give. How do you change communication to encourage those business leaders to get on board with funding the arts?

I think all these discussions are not independent discussions; they’re very much interrelated. For example, making the argument to the business sector in order to encourage them to support arts and nonprofit culture more, one of the ways we’ve been able to retain and attract these millennials who are so important to the for-profit workforce is by having a vibrant cultural scene. The young, Millennial demographic, they’re very interested in quality of life and quality of place. And most tend to identify where they want to live first, and then build roots and careers and things like that.

[We can] start having these discussions and also provide data in terms of retention and why Millennials are choosing to be in Philadelphia, downtown. Center City is really growing – a lot of it has to do with Millennials wanting to stay there. Why do they want to stay? They can walk to all of these museums, and performances and restaurants. People like to eat and like to be entertained. That’s what we offer in Center City. So if we can make this argument to the private sector that if their goal is to have a quality, talented workforce, then supporting arts and cultural institutions on the nonprofit side is one way you can do that. Because that's what attracts Millennials -- this talented workforce -- to Philadelphia, and gets them to stay.

Avenue of the Arts plays into that quite a bit too -- creating this image of a thriving arts community. The Kimmel Center, for example, has done a great job in the past few years of diversifying programming. But it's no secret that if you walk down Avenue of the Arts on a Friday night, it’s still an older white audience. How do you evolve that from where we are?

The more interesting and diverse the programming is in some of the institutions on Avenue of the Arts, the more diverse the audience is. And I think all of these organizations that perform on Avenue of the Arts, from the opera company to the orchestra to the ballet, if you compare some of their seasons today versus maybe 10 years ago, there’s so much more diversity in the selections they’re choosing to perform. And they’re proactively trying to diversify their audience. It won't happen overnight but, at least, that’s the way they’re thinking. Because they want to broaden their audience base. So I think that diverse performances will always attract diverse audiences ...

What are some additional resources you think the office could provide to nonprofits and artists themselves in the city?

One of the questions asked of me during the interview process for this job was, ‘Five years from now, what do you want this office to look like?’ And my answer to this question speaks to what you’re asking: I want our office to be a one-stop shop for any sort of creative business, artist or parent who’s looking for an event or opportunity for their child or community group to get information and link them to the creative sources they need. Whether that’s building up their website, linking up community groups with schools -- I want this to be a point of contact to answer any question that has to do with the creative sector. And not that we do it, solve the problem here, but, at least, we are the place where we have information about all these other existing programs ...

At Innovation Philadelphia I know you did a convergence summit. Do you think there’s a way that could be retooled to make a meeting of minds for the arts in Philadelphia? As a way to convene and check in?

I think one of the responsibilities of this office is to sort of showcase and promote Philadelphia’s cultural scene. And I think when we had the Global Creative Economy Convergence Summit, it definitely did that. We brought people in from all over the world to sort of talk about best practices and programming they were doing while also showcasing what was happening in Philadelphia. And that was a great learning opportunity for Philadelphia’s cultural sector, to learn best practices. So whether we will do that, this office planning a conference or whether or not we will support any conference being planned in Philadelphia that focuses on the creative industry, and wants us to partner with them, we are open to it.

For more on this subject, read these eight arts & culture leaders' thoughts on what Philly's creative sector could use to move forward.