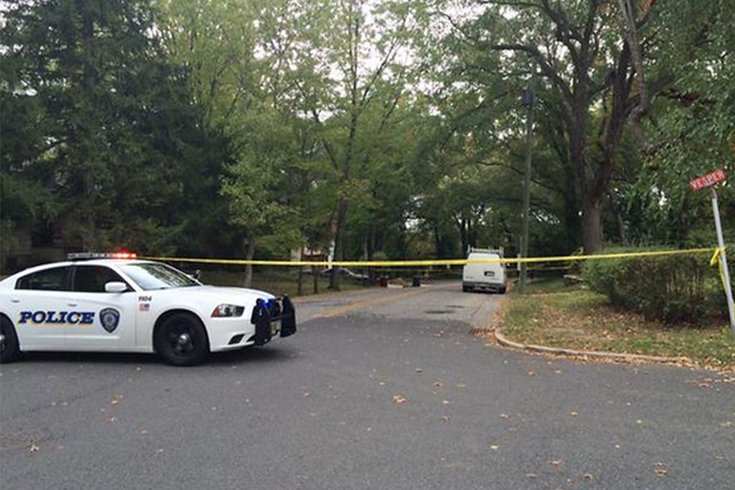 A Haddon Township patrol car blocks off a street in the Westmont neighborhood of the township after a three-year-old boy was found dead in nearby woods on the morning of Tuesday, Oct. 13, 2015.

Authorities have identified a three-year-old boy who went missing overnight from a home in Haddon Township and was found dead this morning.

The boy, identified as Brendan Link Creato of Haddon Township by Camden County officials, was found by a K-9 unit in a wooded area along Park Drive, near the Cooper River, a couple of blocks from his home in the 100 block of Cooper Street. He had been reported missing at 6 a.m. Tuesday.

The results of an autopsy are pending, they said. No arrests have yet been made.

Anyone with information is urged to contact Camden County Prosecutor’s Office Detective Michael Rhoads at (856) 225-8561 or Haddon Township Police Detective Don Quinn at (856) 833-6208.

Tips may also be emailed to ccpotips@ccprosecutor.org.

Members of the Camden County Prosecutor’s Office, Haddon Township Police Department and other police, fire and public safety agencies responded and began to conduct a thorough search for the boy.

"Everyone's really sympathetic," said a neighbor, Tim Collins. "We don't want to jump to conclusions. We don't know what happened."

Neighbors said they received an automated call from the school district this morning informing them that three-year-old boy in pajamas had been reported missing.

Neighbor Carolyne Abbate said she and her 9-year-old daughter started searching the neighborhood after they received the alert.

"I started looking all over my backyard," said Abbate, who lives on same block of the home where the boy was staying. "I even looked in to my pumpkins, thinking he could be hiding maybe."

"It's shocking. Heartbreaking and shocking," she added.

Neighbor Courtney Doss said she got in her car and drove around the area when she heard the boy was missing. She says she started to cry when the search was called off – after a body was found.

"I just wanted to help, really," said Doss. "It's just scary because I live right here."

Family and friends are planning a candlelight vigil at Virginia and Cooper streets at dusk Tuesday, according to Facebook postings.

In addition, a GoFundMe page has been set up to assist Creato's mother in paying for funeral costs and any financial burden she may incur from the loss of her son.