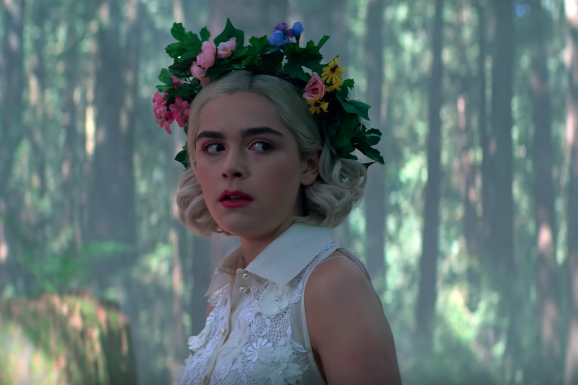 'Chilling Adventures of Sabrina' Season 3 returns to Netflix on Jan. 24 and the witch is the new queen of hell.

There’s a new queen in town, witches. Netflix released the trailer for "Chilling Adventures of Sabrina" Season 3 ahead of its drop this month on the streaming platform.

If Season 2 left you in a bit of a tizzy, Season 3 looks right on track to set that spiral into literal hell. In order to save Greendale and everything close to her, Sabrina must become queen of hell. All hail Sabrina!  (She's also apparently a cheerleader now. Is there anything this queen of darkness can't do?)

Whether this comes with some sort of asterisk – as should be expected with this rambunctious and rebellious character who tends to do things her way – remains to be seen.

But something has to be done. As the voiceover says in the trailer, “The balance is off in hell. So it is in heaven. So it is off on Earth.” Yikes. Can Sabrina save us all? If there’s one witch who can, it’s definitely this one.

Sabrina’s descent into hell doesn’t come without a little blood and freaky demons, but hey, if you want the good witch you should probably watch reruns of Melissa Joan Hart’s ‘90s-esque “Sabrina" instead.

The series returns to the streaming platform on Jan. 24. Until then, we summon you to watch this trailer like the blessed queen would want. Praise be!