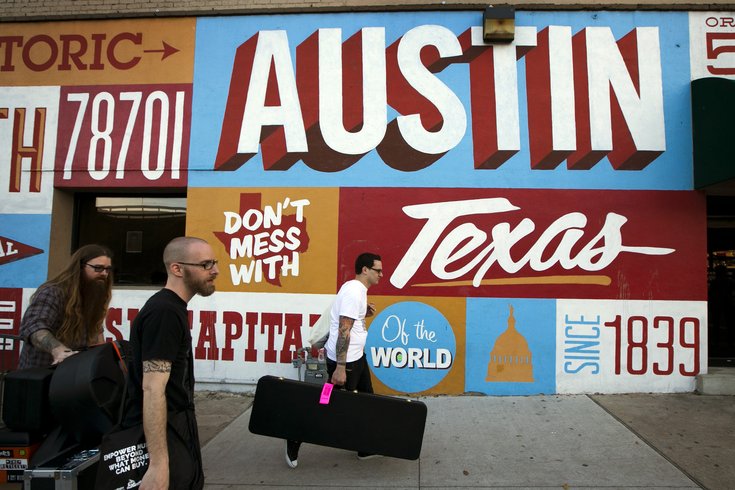 Two more Philly-based bands, Beach Slang and Lovelorn, have been added to the SXSW 2020 lineup, the annual music festival.

The bands will perform as SXSW "Showcasing Artists," the concert's organizers announced Monday, along with Soccer Mommy, Soul Asylum and hundreds more. Philly artists Control Top, Suburban Living, Strange Ranger and Frances Quinlan of Hop Along already had been announced as part of the main SXSW lineup.

SXSW 2020 takes place March 16-22 in Austin, Texas. It is known for its nontraditional music venues, as bands spread across the city performing in bars, clubs, parks, hotels and even churches. Film, art and comedy also have their own exhibitions and lineups within the festival.

Beach Slang, one of the better-known artists included on showcase announcement, is a punk rock band that formed in 2013. They've released four studio albums and are known for a youthful angst inspired by their love of The Replacements. Their last album, "The Deadbeat Bang of Heartbreak City," arrived earlier this month.

Lovelorn is comprised of the husband and wife duo of Anna and Patrick Troxell. The duo, which brands its music as "Drugpop," formerly was part of the band CREEPOID. Lovelorn performed at SXSW in 2019 in the Burgermania Showcase, an event hosted by Orange County, California's Burger Records.

Several Philadelphia artists performed at SXSW 2019 as part of the Amplify Philly Showcase, which had its own venue. The artists included Strand of Oaks, Ali Awan, Killiam Shakespeare, Foxtrot & the Get Down, Great Time, Rachel Andie & The Vth Element.

An event similar to Amplify Philly has not yet been announced for this year, but may be released in the coming weeks.

You can listen to all of the bands announced for this year's SXSW via a comprehensive playlist out now on Spotify.