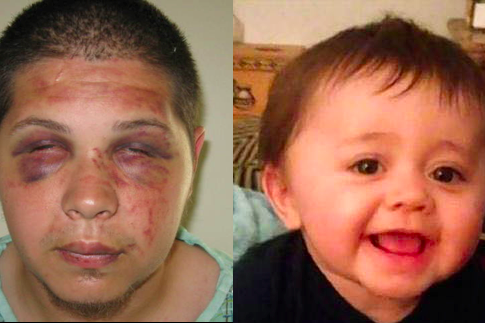 Authorities have released chilling text messages that reveal the final moments before a Connecticut man threw his baby off a bridge Sunday night.

Tony Moreno, 21, was arraigned Wednesday on charges of murder and murder with special circumstances, as well as two counts of violation of a restraining order, the Hartford Courant reports.

Moreno tossed his 7-month-old son, Aaden Moreno, from Middletown, Connecticut’s Arrigoni Bridge, into the Connecticut River, police said. He then jumped into the river in an attempt to kill himself, according to court papers.

Moreno survived and is being held on suicide watch in a medical unit of the state Department of Correction with bail set at $2.1 million. The baby’s body was pulled from the river Tuesday near a bridge in East Haddam.

The baby's mother, 19-year-old Adrianne Oyola, told police she argued with Moreno on Sunday about returning her son, as the two had a 50-50 custody agreement. They exchanged texts moments before the incident.

Excerpts from the chilling exchange:

Adrianne: You can’t just decide not to bring him back Tony. It says in the agreement that Tuesday is my day. … Please don’t try and take him from me!!!!
Tony: You tried to take him away from me. You failed. I didn’t. ... Enjoy your life without us now.
Adrianne: Where are you? Tony, I’m trying to make this co-parent thing work!
Tony: You’re not a parent anymore.
Adrianne: Where are you! Where’s Aaden?
Tony: He’s dead. And soon I will be too

Moreno and Oyola apparently had a strained relationship. Judge Edward Domnarski granted a temporary restraining order against Moreno on June 17 after Oyola wrote in an application that she feared for her child's and her own safety. She wrote that the two were happy but after she became pregnant "everything changed."

Judge Barry C. Pinkus told Oyola and Moreno that their testimony at a June 29 hearing showed there was "chaos" in their relationship but that Moreno was not an "imminent" threat, transcripts obtained by The Courant indicate.

The baby's family and supporters gathered for a prayer vigil Wednesday.

Read more from the Hartford Courant and see the full transcript of texts.