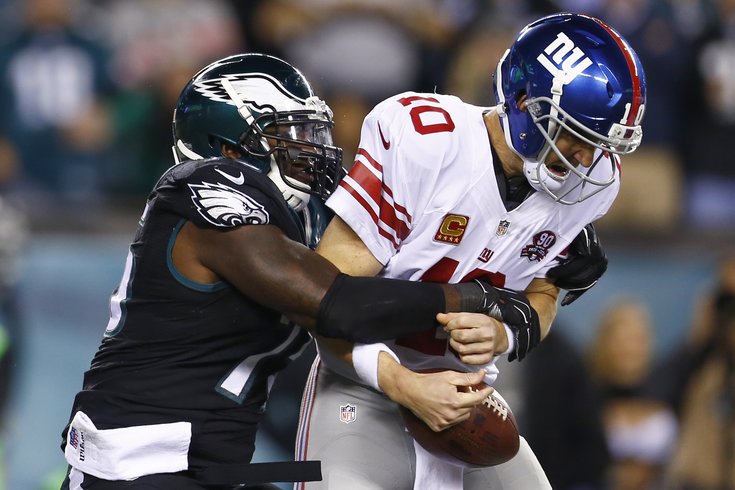 Vinny Curry was a sack machine when he got opportunities to rush the passer a year ago.

Over the bye week, Philadelphia Eagles coach Chip Kelly -- or is it GM Chip Kelly? -- spent his time assessing the state of the Eagles and trying to learn as much as he could about why the team has been so inconsistent through its first seven games. That would give him just enough time to make any adjustments to his roster prior to Tuesday's 4 p.m. trade deadline.

After all that self-reflection, Kelly met with reporters on Tuesday and, naturally, one of the first topics brought up was the deadline. According to the third-year coach, he's seen enough from his team to comfortably stand pat at the deadline. The Eagles you saw through the team's first seven games will be the same ones you'll see going forward.

But his hesitation to make a trade doesn't mean Kelly is 100 percent pleased with the current roster. Some of his hesitation to make a deal could be due to the fact that by Week 9 of the NFL season, it's too late to bring in a player and have him learn a new system and make meaningful contributions down the stretch. The Eagles coach, however, was quick to point out that he hasn't made a trade during the season since he's arrived, so he wouldn't know if the learning curve would be prohibitive.

The only player Kelly was asked about directly was Vinny Curry, who has made the transition from defensive end to outside linebacker in an attempt to get the pass-rush specialist more snaps. An ESPN report -- a report Curry called "crazy," according to NJ.com -- surfaced over the weekend suggesting that Curry could be on the trade block. But if you believe Kelly, he's not going anywhere.

"No," Kelly said when asked if the team has fielded any offers for Curry.

But did you expect him to say anything different?