Should the Eagles pursue a trade for the benched Colin Kaepernick? 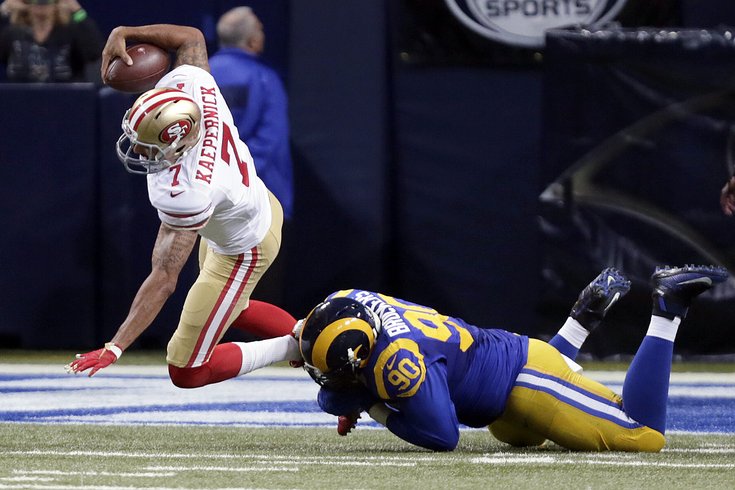 If a quarterback is available, it's a pretty good bet he isn't good. See: Bradford, Sam. Or Foles, Nick, for that matter.

Uh oh. According to a report from Kyle McLorg, San Francisco 49ers quarterback Colin Kaepernick has been benched in favor of... wait for it... Blaine Gabbert.

Naturally, whenever a big name is benched, or is embattled, or beleaguered, or whatever, fans of every NFL team will go, "Hey, how would that guy fit in on my team?" For some Eagles fans, the math is rather simple on Kaepernick: 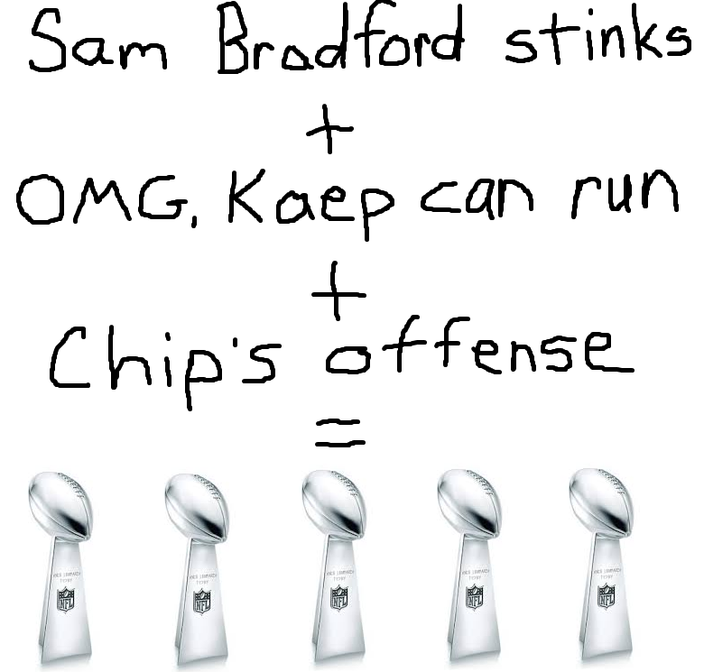 And that's actually an equation that I get. Here's the part of the article where I ask questions to nobody in particular and then answer them myself:

• Is Kaepernick better than what Sam Bradford has been for the Philadelphia Eagles so far this season? Eh, I guess. It's debatable, really, and that's coming from one of Bradford's biggest critics. But whether Kaepernick is better than Bradford or not, we're not exactly talking about a high bar to clear there.

• Would Kaepernick be a better fit in "Chip Kelly's offense?" In the run game... sure. He'd give the Eagles a running element that would in theory help keep defensive backside pursuit more honest in the defending the run because they'd have to be more wary of the quarterback keeping the ball on a zone read looks, and Kaepernick could burn them if they don't. From that perspective, I can see it. But in the passing game, can he throw accurately from the pocket and think quickly in a fast-paced offense? He certainly hasn't proven he can do that.

In 2014, Kaepernick took 52 sacks. That was second worst in the NFL, behind only Blake Bortles. So far in 2015, he has taken 28 sacks, putting him on pace for 56 on the season. Over his career, Kaepernick has taken a sack every 10.1 pass attempts. That is the third worst in the NFL among Week 1 starting quarterbacks. That is emblematic of a quarterback who is not making quick decisions with the football.

As a passer, he's among the league worst in nearly every statistical category this season. Here is where he ranks among 33 quarterbacks with enough "qualified" pass attempts:

In 2012, a number of offenses began implementing zone read looks, and opposing defenses weren't quite ready for it. 2012 was the year Robert Griffin III won "Rookie of the Year" honors and led the Redskins to an NFC East title. It was also the year the Niners went to the Super Bowl with Kaepernick at the helm. As they do with any "new" offensive look, defenses adapted, and quarterbacks who relied on those concepts to succeed are faltering years later.

Griffin's decline accelerated more quickly than Kaepernick's because he was seriously injured, eventually being benched in favor of the most interception-prone starting quarterback in the NFL in Kirk Cousins. Kaepernick's decline has been a little more slow and steady:

And the decline hasn't just been as a passer. It's been as a runner too.

Kaepernick has a bad contract

Here is Kaepernick's contract, via overthecap.com: 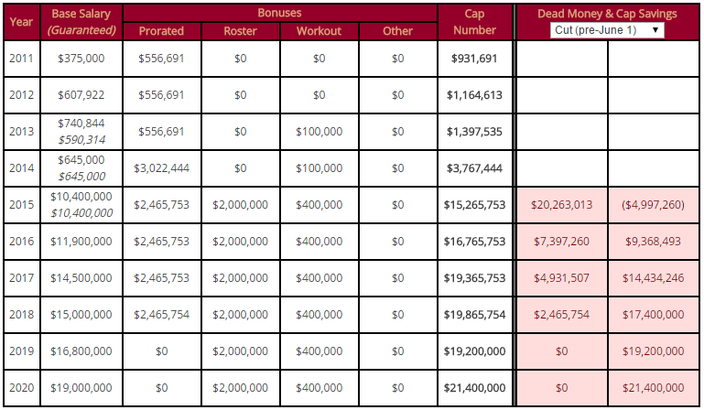 As the above chart shows, Kaepernick's cap number accelerates from roughly $15 million in 2015 to $21 million in 2020. While the Niners have ways to get out of that contract with manageable pain, they are likely at the point of recognizing that Kaepernick's on-field production no longer is coming remotely close to warranting his pay.

Local radio intellectual Josh Innes apparently suggested on Monday that he would trade star DE Fletcher Cox to the Niners for Kaepernick. I'm not even sure what that's supposed to mean. Like, should the Eagles trade for Kaepernick as in... right now? They should give up their best player in Week 9 of the season for a quarterback who makes too much money, can't throw from the pocket, would have to quickly learn a new offense, develop rapport with an extraordinarily young/struggling receiving corps, and may wind up being cut by the Niners anyway? Because he might be better than Sam Bradford?