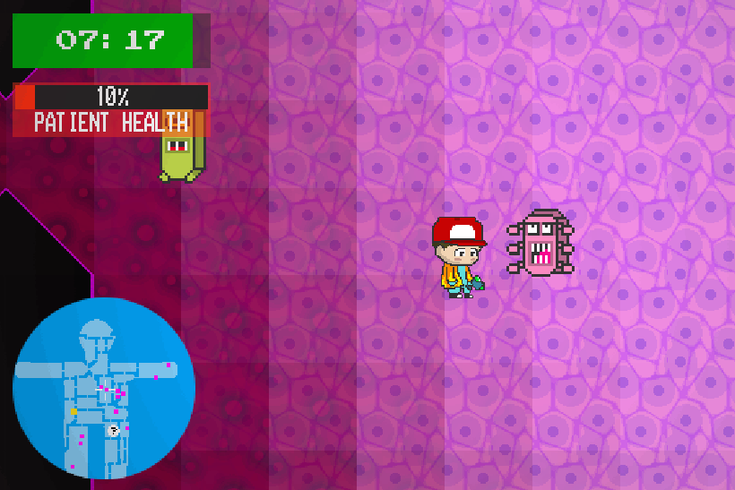 In "Vax Pack Hero," kids defeat infectious diseases with trading cards that feature scientists, philanthropists and politicians who played a role in the history of vaccine research.

For kids, vaccine shots rank up there with broccoli and homework as pretty much the worst things ever. The Children's Hospital of Philadelphia is hoping to change those negative attitudes with something fun — an online video game called Vax Pack Hero.

The game bears a striking resemblance to Pokemon but, in this case, you definitely don't want to "catch 'em all." Kids control a character inside a sick body crawling with germs, and only Vax Hero trading cards can defeat the diseases.

The heroes are people like Jonas Salk, creator of the first polio vaccine, and Margaret Pittman, who developed a better whooping cough vaccine and identified a strain of the Hib bacteria that causes meningitis in babies. A Salk card defeats polio, a Pittman card defeats Hib and so on.

Kids can play the game online for free, but parents can also buy them physical trading cards. The money goes mostly to cover expenses but any profit would go to the Vaccine Education Center.

"Kids often associate negative emotions to getting vaccinated — they remember the shots and the pain and going to the doctor's office — so our first reason (for designing the game) was to try to replace some of [those] negative associations with positive emotions," said Charlotte Moser, assistant director of the Vaccine Education Center at CHOP.

Another reason CHOP developed the game, she said, is that "we wanted to help players realize that science builds on the previous work of others."

Take the fight against polio as an example. Scientist David Bodian and his team figured out how the polio viruses enter the body. Albert Sabin and Jonas Salk built on his work to develop different kinds of polio vaccines. President Franklin Delano Roosevelt, himself a polio survivor, founded the "March of Dimes" which helped fund Salk's research. (In fact, that's why FDR's face is on the dime in the first place.) 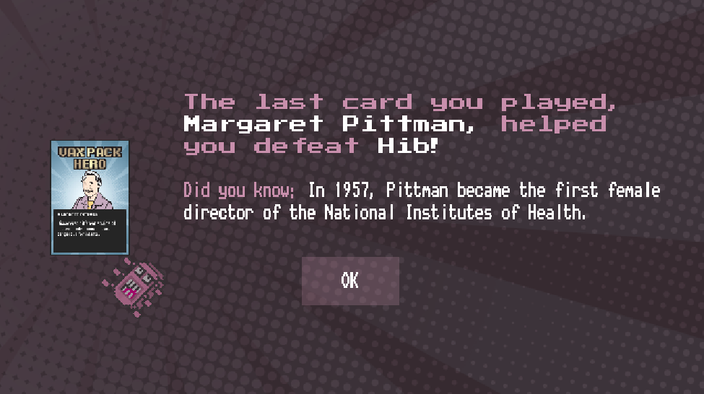 Margaret Pittman is one of 50 'vaccine heroes' featured in the game.

CHOP also wanted to highlight some of the unsung heroes of medicine — like Dr. Maurice Hilleman, who is believed to have saved more lives than any other scientist in the 20th century. A scientist at Merck and professor at the University of Pennsylvania, he developed eight of the 14 most commonly recommended vaccines, but he didn't name a single one after himself.

"He's credited [with] saving eight million lives a year with his work, and most people don't know his name," said Moser.

"He didn't want himself on a card actually; he's very humble," said Moser. "Our CHOP team overruled him."

None of the scientists, philanthropists and politicians featured on the cards have a reason to be humble: their research and fundraising for vaccine research truly did make them heroes.