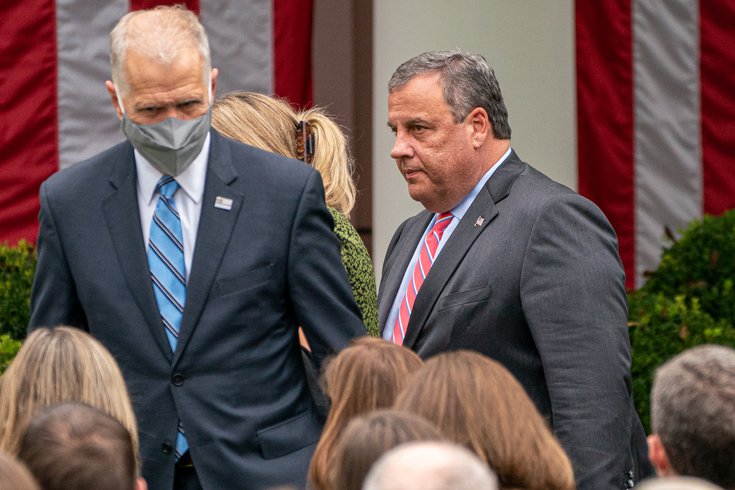 Chris Christie, pictured right attending a White House rose garden event announcing the nomination of Amy Coney Barrett to the Supreme Court, announced Saturday morning that he was released from hospital. The former New Jersey governor was one of several attendees to the event that subsequently tested positive for the virus.

UPDATE: Chris Christie was in the Intensive Care Unit for the duration of his hospitalization for COVID-19, he said Thursday, Oct. 15. Christie then called on all politicians to advocate for the wearing of face coverings.

"Every public official, regardless of party or position, should advocate for every American to wear a mask in public, appropriately socially distance and to wash your hands frequently every day," Christie said in a statement.

After days of treatment following a positive coronavirus test result, Chris Christie has been released from the hospital, the former New Jersey governor announced Saturday.

Christie said in a message posted to social media around 9 a.m. that he checked out of the Morristown Medical Center earlier Saturday morning.

I am happy to let you know that this morning I was released from Morristown Medical Center. I want to thank the extraordinary doctors & nurses who cared for me for the last week. Thanks to my family & friends for their prayers. I will have more to say about all of this next week.

The former Gov. was checked into the hospital in Morris County last Saturday, Oct. 3, after testing positive for COVID-19 earlier that morning.

When he entered the hospital one week ago, Christie said he was only experiencing mild symptoms, but doctors recommended hospitalization due to his history of asthma.

The 58-year-old tested positive just one day after President Donald Trump and the first lady Melania announced that they contracted the virus last Friday. Trump was then taken to Walter Reed Medical Center in Washington, D.C. later that evening for treatment.

President Trump himself checked out of the hospital on Monday after just three days of treatment for coronavirus. The move has been criticized as Trump then returned to the Oval Office on Wednesday, thus violating isolation rules for the recommended 14-day quarantine.

Christie said on Twitter he sought testing after the Trumps' announcement, as the former governor had spent several days with the President helping with debate preparations. He even said much of the time spent with Trump and other advisors was unmasked.

The Essex County native also attended a Rose Garden ceremony announcing the nomination of Judge Amy Coney Barrett to the U.S. Supreme Court. Christie was then one of at least eight attendees to the outdoor White House event that subsequently tested positive for coronavirus.

Several other members of Trump's staff and people who spent time with the President then also tested positive COVID-19.