He and first lady Melania Trump tested positive for COVID-19 on Thursday; the White House says the president is expected to say in the hospital for a few days 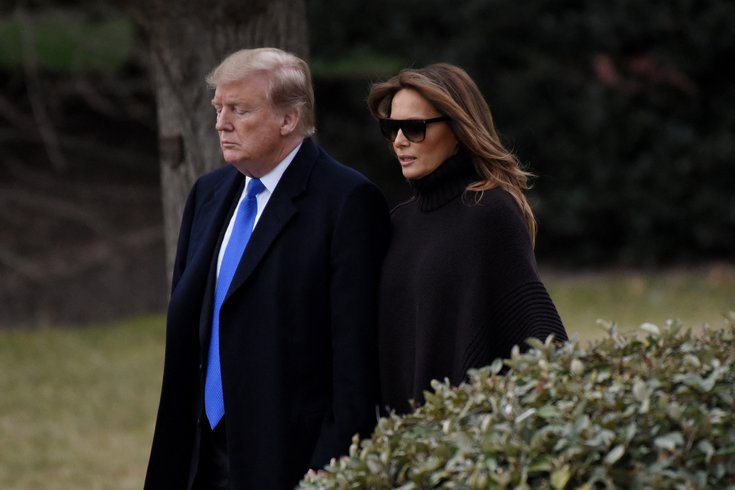 Trump, who was diagnosed with COVID-19 last Friday, said he expects to be back soon.

An update from Trump's medical team on Sunday included new information that Trump had a “high fever” and a blood oxygen level below 94% on Friday before his hospitalization.

Doctors said the president was now receiving a steroid treatment in addition to his previous anti-viral treatment of Remdesivir and the experimental dose of Regeneron.

It's possible Trump could be discharged from Walter Reed as soon as Monday.

"President Trump remains in good spirits, has mild symptoms, and has been working throughout the day," White House Press Secretary Kayleigh McEnany said in a statement. "Out of an abundance of caution, and at the recommendation of his physician and medical experts, the President will be working from the presidential offices at Walter Reed for the next few days. President Trump appreciates the outpouring of support for both he and the First Lady."

Trump has begun receiving an experimental treatment called Regeneron, which includes two coronavirus antibodies, NPR reported. The medicine is currently in clinical trials and has not been approved by the U.S. Food and Drug Administration. Trump also reportedly is taking supplements including zinc, vitamin D and melatonin.

His physician, Dr. Sean Conley, described the president as "fatigued" but doing well.

Dr. Sanjay Gupta, a medical correspondent for CNN, said earlier Friday that Trump stood a better than 90% chance of surviving COVID-19, but later shared some concern about the chosen course of treatment. A study on Regeneron released in recent days included only a small sample of patients, but showed promising results in shortening the duration of symptoms.

"There is a level of concern here," Gupta said. "They've gone ahead and decided to do this experimental therapy."

Trump posted an 18-second video to Twitter before being hospitalized.

President Donald Trump and first lady Melania Trump said they tested positive for COVID-19 on Friday, which comes after a week full of public campaign appearances, the first debate of the 2020 presidential race and a stop on Thursday at his golf club in New Jersey.

Trump visited Bedminster, Somerset County, for a fundraising event. He had been scheduled to be in Philadelphia on Sunday to receive the endorsement from Local 22 of the International Firefighters and Paramedics Union – a move by union leadership that reportedly has divided its members – but now Trump and his wife are in quarantine.

White House Chief of Staff Mark Meadows said on Friday morning that Trump was experiencing mild, coldlike symptoms from the virus, and the New York Times reported that an attendee at the president's fundraiser at Trump National Golf Club Bedminster said the president seemed lethargic at the event.

Trump announced he tested positive for the coronavirus in a tweet just before 1 a.m. Friday, creating uncertainty about the Nov. 3 election that is just weeks away. Donald Trump is 74, and Melania Trump is 50.

This is a developing story. Ongoing updates to this story can be found at the New York Times, Washington Post, CNN and FOX News.

"Tonight, @FLOTUS and I tested positive for COVID-19," wrote Trump in the post. "We will begin our quarantine and recovery process immediately. We will get through this TOGETHER!"

Tonight, @FLOTUS and I tested positive for COVID-19. We will begin our quarantine and recovery process immediately. We will get through this TOGETHER!

The post came just hours after it was revealed that senior aide Hope Hicks tested positive for COVID-19 after traveling with Trump aboard Air Force One and Marine One to several of his campaign events, including the one in Bedminster.

Melania Trump also said on Twitter that she was postponing all of her own upcoming engagements because of her positive coronavirus test.

As too many Americans have done this year, @potus & I are quarantining at home after testing positive for COVID-19. We are feeling good & I have postponed all upcoming engagements. Please be sure you are staying safe & we will all get through this together.

The president and the first lady tested positive for coronavirus on Thursday, according to a memo from Trump's physician Dr. Sean Conley.

The diagnosis comes just days after the first presidential debate against Democratic candidate Joe Biden. A second presidential debate was scheduled Oct. 15. There now are questions about whether that will occur as the date is less than two weeks from Friday's quarantine announcement.

Trump's positive coronavirus test follows months of him downplaying the seriousness of coronavirus.

Vice President Mike Pence and his wife Karen Pence have tested negative for the coronavirus since the news broke about the president. The vice president is first in line to the presidency, followed by the speaker of the house, Rep. Nancy Pelosi.