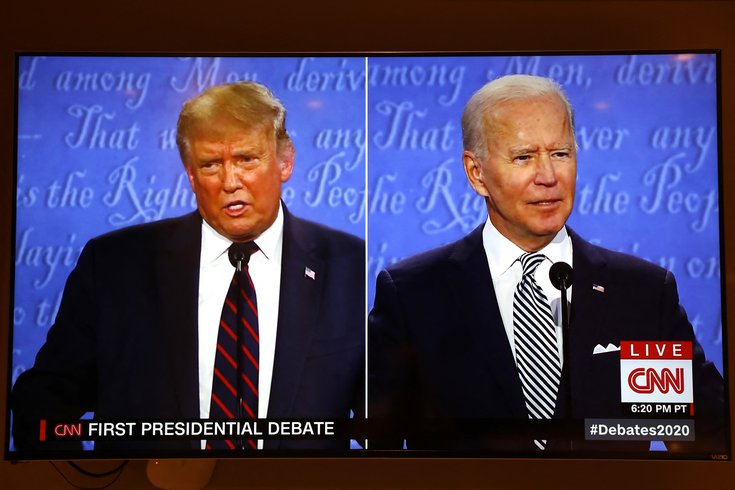 President Trump’s claim that poll watchers had been blocked from observing voting in Philly is false, as his campaign has no poll watchers approved yet to work in the city.

The debate moderator, Fox News’ Chris Wallace, asked both presidential candidates whether they would encourage their supporters to remain calm and avoid civil unrest during the election season, as well as if they would not declare victory until the results are independently-certified.

RELATED: Check out all the 'Bad Things Happen in Philadelphia' merch after Trump-Biden debate

Trump refused to commit to any such pledge, and he instead cited the voting process in Philadelphia as a reason why.

“I’m urging my supporters to go into the polls and watch very carefully, because that’s what has to happen,” Trump said. “I am urging them to do it. As you know, today there was a big problem. In Philadelphia, they went in to watch. They’re called poll watchers, a very safe, very nice thing. They were thrown out. They weren’t allowed to watch. You know why? Because bad things happen in Philadelphia. Bad things.”

Chris Wallace: "Will you pledge tonight that you will not declare victory until the election has been independently certified?"

Trump: "I'm urging my supporters to go into the polls and watch very carefully." pic.twitter.com/oESX74834G

However, Trump’s claim that poll watchers had been blocked from observing is false. The Trump campaign has no poll watchers approved yet to work in Philly, according to the Inquirer.

The seven satellite election offices which the city commissioners opened on Tuesday are not actual polling places, and officials are limiting capacity in such locations due to the ongoing COVID-19 pandemic. Poll watchers do not have the same rights at early voting locations as they do at traditional polling places.

State law allows political campaigns and parties to appoint poll watchers per precinct, where they are allowed in to observe voting and potentially raise any legal challenges. Poll watchers must have a certificate verifying their status and be registered to vote in the county where they are observing voting.

Trump had made the claim earlier Tuesday on Twitter, the latest in which he has tried to cast mail-in voting as fraudulent, after one woman claiming to be a Trump campaign poll watcher was prevented from entering a satellite election office at Overbrook Elementary School. She had no certificate proving such status.

Wow. Won’t let Poll Watchers & Security into Philadelphia Voting Places. There is only one reason why. Corruption!!! Must have a fair Election.

Nevertheless, Trump’s comments during the debate sent social media abuzz, leading many to rebuke his claims about Philly.

Hold on !! He’s talking about Philly?
Philly everyone please get out and VOTE!!


Donald Trump needs to keep Philly out of his mouth. We will not allow him to intimidate us—or to keep us away from the ballot box.

He’s going to get whupped here and he knows it.

We’re a majority minority city—a melting pot. A home to many cultures and immigrant communities. Our city's population has grown because of this. We celebrate it. pic.twitter.com/8fnW9ZDYlU

We’re a city of underdogs. We’re gritty and passionate about what we love. We won’t be written off. pic.twitter.com/iaKFoPFfIu

Didn't expect the Phillies bullpen to make the debate stage, but here we are.

Eagles/76ers/Flyers/Phillies fans: “He’s got a point.”

One local company called Camden Printworks is now selling a shirt with "Bad Things Happen in Philadelphia" written across the front.

The seven satellite election offices allow residents to register to vote and request, receive, complete and submit a mail-in ballot – all in one visit. Voters are also able to drop off completed ballots ahead of the Nov. 3 election.

Polling indicates that the race for Pennsylvania will be close. Biden currently leads Trump by an average of 5.7 points in the state, according to Real Clear Politics.