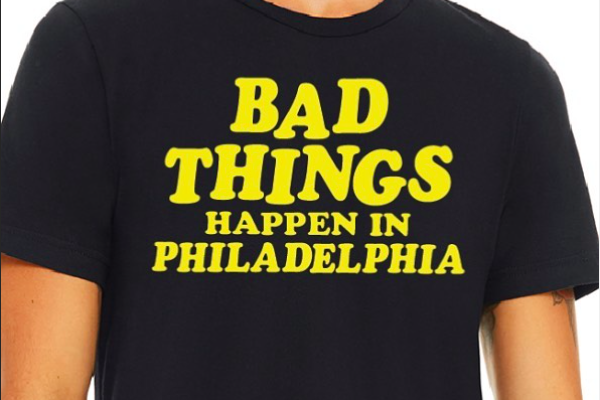 "Bad things happen in Philadelphia," according to President Donald Trump, so now you can wear it proud with all kinds of merchandise after the Sept. 29 presidential debate.

As if watching Tuesday night's brutal presidential debate were not painful enough, President Donald Trump took a gratuitous shot at Philly while making a false claim about poll watchers.

But unwarranted shoutouts are the moments Philadelphia somehow lives to celebrate. There is a kind of "bad" that in Philadelphia means interesting, funny and distinctive. It means "good" in a way that no one else would use good, kind of like the way Portland intends the word "weird" to be used.

So within hours of the debate, a cottage industry of "Bad Things Happen in Philadelphia" merchandise flooded the market.

Here, we've rounded up a sampling of what's out there, if you're inclined to commemorate the moment.

There are plenty of T-shirts going around, including this $24 gem pictured below.

It’s just what I heard. From a very reliable source, the most reliable some say. Bad Things shirts available now on pinkbikeralph.com, link in bio #printordie #badthingshappeninphiladelphia #philly #philadephia

The best of the bunch, arguably, is this sweet demonic Gritty design from GrimGrimGrim, which is available in several colors.

Honey Bee Supply Co. has a $24 shirt that can say either "Bad Things" or "Good Things" happen in Philly.

Another T-shirt option is a Ben-Franklin-themed one from Wooderice, with a portion of proceeds benefitting Morris Animal Refuge. You can swipe below to see the two different designs available.

Link is now live. Click the link in our bio to place your orders for either the classic Wooder Ice bandana or the Philadelphia Flag. These are a limited run. A portion of the proceeds will go towards @morrisanimalrefuge 🐾 . . Make sure to tag us once you recover your items for a repost!

A shirt from Bonfire, benefitting Philadelphia community initiatives, goes with its own take on the quote. It reads "Bad[ass] Things Happen in Philadelphia."

This one from designer Jacob Dombroski includes the nice touch of Trump's second statement of "Bad things!" added for emphasis.

Etsy designer MyWeekDesigns also has a slew of T-shirts that play on themes of the Liberty Bell and cheesesteaks, ranging from $19.99 to $29.99 in several colors.

If you're keen on the trend of red hats that substitute other messages for "Make America Great Again," this $27 ball cap needs no further explanation.

You can also pick up a Gritty or Center City-themed sticker or a mug with a Trump or "Always Sunny" design.

It's no surprise that Philadelphia and the rest of Pennsylvania were frequent themes in Tuesday night's debate. The state figures to be a potentially decisive battleground in the presidential race. We'll see if Trump has more thoughts to add about Philly when he faces off against Biden for the second debate on Oct. 15.