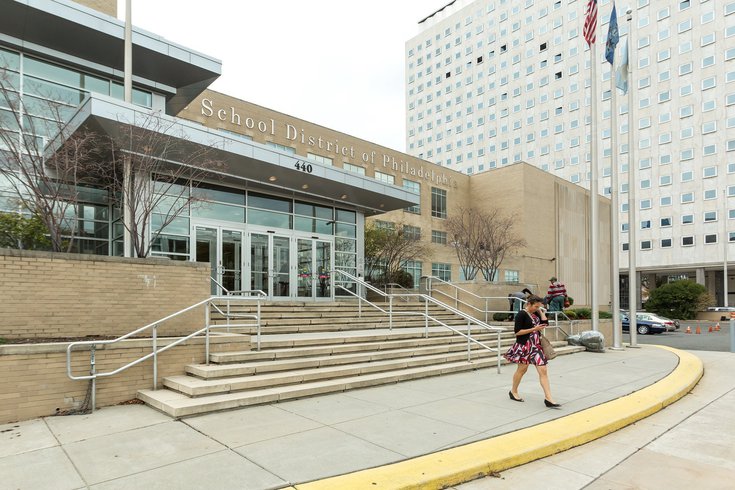 The City Controller's Office released an interactive map Wednesday that lists every asbestos abatement project in School District buildings since 2016.

The School District of Philadelphia has spent a large portion of the last several years performing cleanups of their buildings following several high-profile cases of asbestos found in their elementary, middle, and high schools, where some of the buildings are over 100 years old.

Former Franklin Learning Center biology teacher Lynn Johnson began teaching at the school in 1999, and throughout her tenure learned of the harmful building conditions that she says District officials knew about and did not address until after she retired. Franklin Learning Center, built in 1908, was among five Philadelphia schools that closed in 2019 due to toxic materials like asbestos, according to WHYY.

Other schools included Science Leadership Academy and Ben Franklin High School, whose joint school building was shut down following asbestos uncovered during construction that occurred while students were in attendance in 2019, according to the Philadelphia Inquirer.

As recently as August of this year, students and families at Julia R. Masterman School and Science Leadership Academy at Beeber reported concerns over asbestos and other unsafe conditions to School District officials ahead of the resumption of in-person learning. A group of Masterman teachers initially planned to work outdoors for the beginning of the school year after exposed asbestos was found on school grounds.

As a response to growing public concerns over asbestos in Philly schools, the city controller’s office released an interactive map of every asbestos abatement project happening in local public schools on Wednesday.

Though City Controller Rebecca Rhynhart is unable to conduct performance assessments on the School District, as that job falls into the jurisdiction of the State Auditor General, as she says in a statement released by her office, she decided to put together the map as a way to educate residents and families and keep them up-to-date on projects happening in schools across their communities.

Compiled with data from the Philadelphia Department of Public Health, the audit contains information on over 1,700 asbestos projects in School District facilities beginning in 2016.

Some schools, like Frankford High School and Laura H. Carnell Elementary School, have had as many as 22 asbestos-related projects and cleanups performed in their buildings, according to the map.

The fight to clean up Philly schools has been years in the making, with the Philadelphia Federation of Teachers leaders calling for a state of emergency declaration in 2020 over school conditions. Some schools were closed for extended periods of time for cleanups prior to COVID-19, sending all Philly students home for virtual learning in 2020.

According to the map, there have been 403 "major removal projects" in the School District since 2016, which are abatements of 80 square feet or more, according to the City Council's office. Major projects require a permit to be issued and approved by the Department of Public Health.

This audit follows a hearing from City Council’s committee on Licenses and Inspections on Nov. 5, in which the council heard several testimonies about pending legislation that would implement additional inspection standards for Philly schools. If passed, schools would be unable to receive their special certificate of inspection if asbestos and mold standards are not met.

Philadelphia Public Health Commissioner Dr. Cheryl Bettigole was among those who testified Friday, to discuss the lack of EPA-regulations for mold inspections and the current state of asbestos regulations for buildings, as determined by the EPA Asbestos Model Accreditation Plan.

“Conducting testing on the scale proposed in this bill falls far outside of the current expertise and capacity of staff within the PDPH,” she said, instead suggesting the use of an independent, contracted inspector that could inspect schools at the magnitude expected by the EPA, in order to relinquish some of the “operational burden” on the city of Philadelphia and the Department of Public Health.

“Every child deserves to grow up in a healthy, safe, and nurturing environment. Experiences during childhood such as poverty, poor nutrition, or exposure to environmental hazards can shape and impact future health,” Dr. Bettigole said. “Despite advances in pediatric care and public health efforts, poor and racial and ethnic minority children still face a disproportionate burden of chronic disease, premature death, and preventable illness.”

Bettigole notes that even if the Department of Public Health were able to provide inspectors on the level that the bill requires, they would not be able to be instituted by the time the bill would go into effect, on Aug. 1.

The School District of Philadelphia publishes all asbestos-related inspection reports on their website, as per requirements by the EPA.