A member of the Philadelphia Parking Authority writes a ticket for an expired meter in Center City.

If you've ever tried your foolhardy luck against the powers of Philadelphia's parking enforcement, you've probably learned, ticket in hand, that the odds of evasion are beyond lousy.

Today, the City of Philadelphia released a massive heap of data supporting perceptions that the Philadelphia Parking Authority and other authorized agencies follow aggressive ticketing practices, to say the least.

The new data set reflects a range of violation types that occurred throughout Philadelphia between January 2012 through March of this year, totaling nearly 4.9 million tickets. With the city's population just over 1.5 million in July 2013, there were an average of about 3.15 tickets written per city resident over the last two years – despite a downward trend in households depending on cars. Obviously, car owners from the suburbs pay parking tickets, too.

The data can be visualized by zip code to look at both the total number of parking tickets or the total dollar amounts assessed in fines. That's where it really hurts. Those 4.9 million tickets totaled more than $225 million dollars in fines. 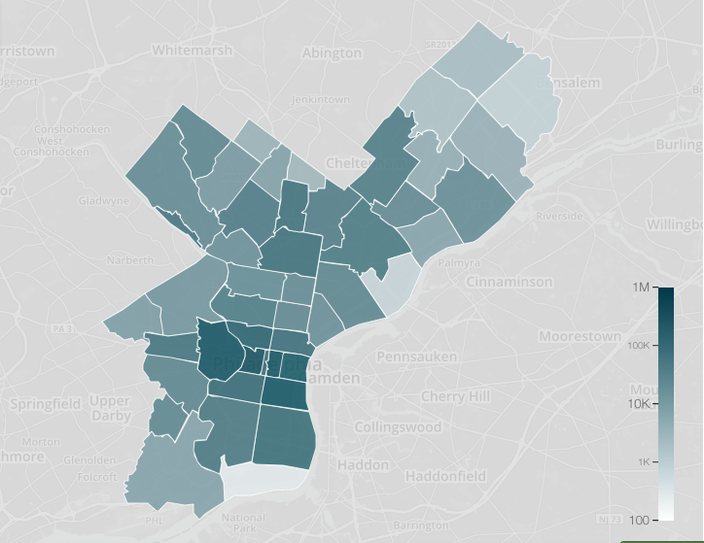 A map shows where the most parking tickets were written, by zip code. The darker the color the more tickets issued. (Socrata/data.phila.gov)

The most heavily ticketed areas are predictably in and around Center City, where 1.3 million tickets for expired meters alone totaled about $46.1 million in fines. University City, Callowhill and North Broad Street were also heavily hit areas, while the most common violations across the board included parking over time limits, prohibited stops, and expired inspections.

Based on these numbers, Curbed Philly's recent consideration of parking costs as a hidden rent booster may benefit from including factors beyond the costs of garage parking, permits, or increases in rent based on the cost of private lot construction. Considering that the total number of violations remained largely stable over the 39-month period, the new data suggests that certain sections of the city bear the risk of another hidden cost in ticket enforcement.

“We are proud to reinforce our commitment to transparency and open government by publishing parking violation data online,” Mayor Michael Nutter said in a statement. “This release joins a growing list of more than 170 open data sets that help inform citizens and strengthen trust in government.”

The data tool, available to peruse at www.opendataphilly.org, will be used as part of an ongoing effort to connect the general public to open data. To learn more about these initiatives, head over to www.phillyinnovates.com for information on this and other projects related to open data.