The prescription sensors could detect glucose, albumin and pH in the blood 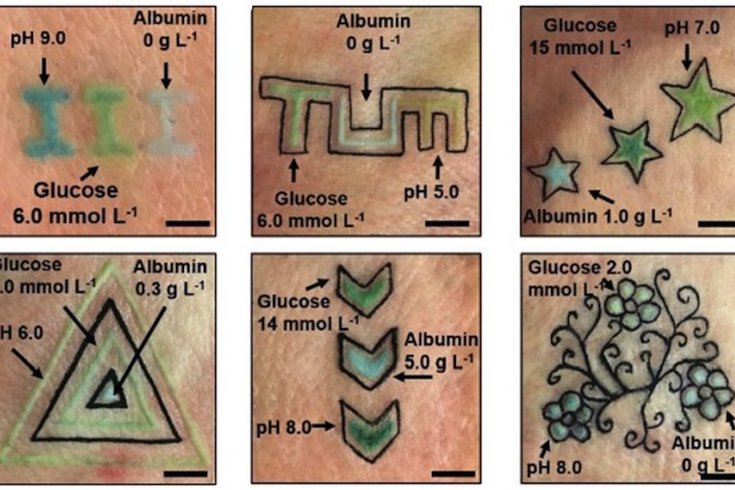 Photos of the color changing tattoos from the researcher's report.

Gone are the days in which tattoos were just permanent wearable decor on one’s body. Now, scientists are hoping to add some function to the permanent skin marking.

Researchers at the Technical University of Munich have developed an “intradermal tattoo” that changes color in response to changes in glucose, albumin, or pH levels.

The tattoos in testing offer a promising new method for diabetes and kidney disease patients to monitor their disease in real time, according to researchers.

"Here, a functional cosmetic technology was developed by combining tattoo artistry and colorimetric biosensors …. Dermal tattoo sensors functioned as diagnostic displays by exhibiting colour changes within the visible spectrum in response to variations in pH, glucose, and albumin concentrations,” the researchers wrote in their report.

The use of color-changing dye can potentially detect changes in each of the three biomarkers — glucose, albumin, or pH — in the body’s interstitial fluid, which transports oxygen and glucose between cells.

The albumin sensor is a yellow dye that turns green in the presence of albumin, the changing concentration of glucose causes the sensor’s pigment to go from yellow to dark green, and the pH sensors ranges from yellow to blue at normal levels, researchers said.

So far, the tattoos have only been tested on pig skin and are not ready for human use, according to the researchers. They need to ensure that each of the color-changing sensors are reversible.