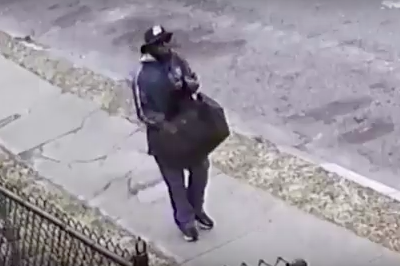 Philadelphia police are searching for four suspects in a violent home invasion that began Wednesday afternoon with an assault by a person disguised in U.S. Postal Service uniform.

Investigators said the incident occurred around 3:15 p.m. on the 5400 block of N. 2nd Street in the Olney section of North Philadelphia.

Surveillance video of the incident shows the victim, 44, was approached by the imposter mailman while placing an infant in his car on the street outside his home. The suspect is seen in the video pulling a handgun on the victim and forcing him into his residence.

Police said three other suspects soon rushed into the house, zip-tying and duct-taping the victim before demanding money.

The victim was struck in the face with a black semi-automatic handgun, investigators said.

After spending 15 minutes ransacking the home, the four suspects allegedly took $5,000, an I-Phone 7 and the victim's house and car keys. The infant was unharmed.

Police said video surveillance showed both vehicles circling the block about an hour before the home invasion took place.

The first suspect is described as a black male in his early to mid-20s, about 5 ft. 5 in. with a muscular build and beard. He was last seen wearing a U.S. Postal Service uniform, black and white sneakers, dark sunglasses and carrying a dark postal bag.

The second suspect is described as a black male with a stocky build, about 5 ft. 9 in., last seen wearing a gray or black hooded jacket with black gloves, dark-colored pants, a black mask and black shoes.

The third suspect is described as a black male, about 6 ft. with thin build, last seen wearing a dark hooded jacket, black gloves, a black mask and tan boots with no laces.

Police described the final suspect as a black male, about 5 ft. 10 in. with a thin build, last seen wearing a black hooded jacket, black gloves, a black mask and black sneakers.

Anyone with information about this crime or the suspects is asked to contact Northwest Detectives at 215-686-3353.