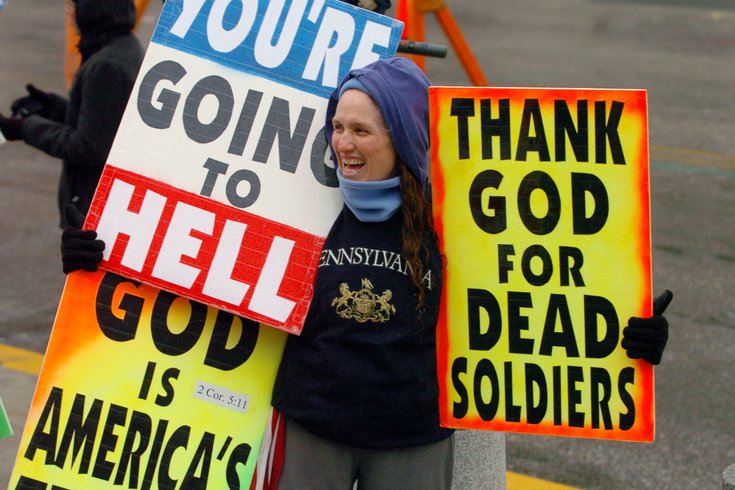 Shirley Phelps-Roper, a member of the Westboro Baptist Church of Topeka, Kansas, protests in front of the Pennsylvania Statehouse in Harrisburg in this March 2, 2006, file photo.

A few hundred Philadelphians are slated to show up to counter-protest a group known for hateful rhetoric against the LGBTQ community during the upcoming Democratic National Convention.

The Westboro Baptist Church — an "obnoxious and rabid hate group," according to the Southern Poverty Law Center — is planning to protest outside the Mazzoni Center Family & Community Medicine on July 26, the second day of the convention.

The center at 809 Locust St. is one of the three locations of the Mazzoni Center, which provides health and wellness services to gay and transgender individuals.

The church, known for protesting the funerals of soldiers and vulgar anti-gay slogans, called the center a "running sore of sodomite filth" and plans to hold a demonstration at 2:15 p.m.

The Facebook event for the counter-protest says its demonstrators plan to show up half an hour before that. The description reads, "Come protest the silliest protesters of all time!!!!"

According to the event, more than 265 people plan on going and an additional 667 are interested.

Some posted concerns on the event page about patients being able to safely get in and out of the center, an issue the center addressed in a statement Tuesday:

As some of you may be aware the Westboro Baptist Church is planning a protest outside the offices of Mazzoni Center Family & Community Medicine on Tuesday, July 26. This group has a reputation for extremely hateful speech, and they have announced their intention to specifically focus their protest on transgender individuals. We are taking all steps necessary to ensure that our patients and staff have safe access to the building that afternoon, in order to receive care and services. While we respect the right to free speech, we will also do everything necessary to support and protect our communities and the people we serve, and to stand up for justice.

Whether the church even shows up, to be clear, is not a sure thing. Metro reports that the group's application for 10 people to hold a "peaceful religious demonstration" is still pending.

The newspaper also notes that the church, which also said it will protest at the Republican National Convention in Cleveland the week beforehand, often fails to show up after publicly announcing its plans.