Katy Harris and Chris Eisenmann are now Swifties for life. 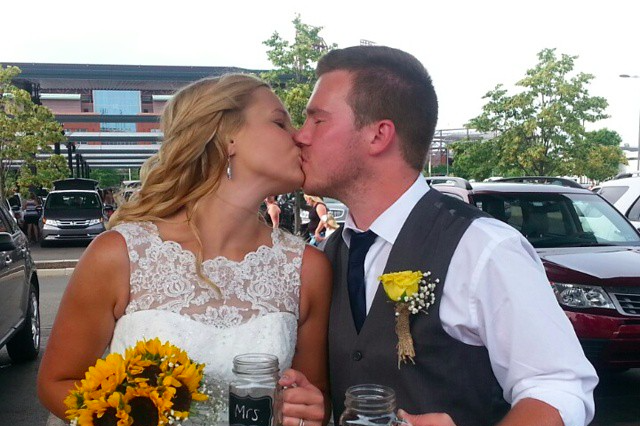 Katy Harris and Chris Eisenmann tied the knot outside of Lincoln Financial Filed before the first of two concerts on Taylor Swift's 1989 World Tour.

A couple from South Jersey may love Taylor Swift as much as they love each other, because on Friday they eloped outside of Lincoln Financial Field before Taylor Swift's first of two Philadelphia concerts on her 1989 World Tour.

Despite the blazing 90 degree heat, Katy Harris and Chris Eisenmann showed up at Lot K dressed for the ceremony, performed by Harris' brother, and joined by other family, friends and fans of the iconic pop star. Harris, who was born in 1989, first introduced Eisenmann to Swift in 2006 and their love has traveled with her rising star ever since.

The pair had planned to get married at some point in the near future when finances allowed, but as they planned their costumes for the Taylor Swift concert, Harris eyed her wedding dress and Eisenmann agreed the occasion would be just right. In a message on Instragram prior to the big day, Harris shared the following

And the rest is the future.