A bail hearing was set on Friday for Philadelphia native and hip-hop artist Meek Mill – or so it seemed.

Just hours after a bail hearing was set for Nov. 27, court officials removed the listing from the case docket and stated that the hearing was scheduled in error.

"It was a clerical error," the spokesman told Philly.com. "Judge Brinkley schedules her own hearings."

The incident won't sit well with members of the hip-hop community and others who were already outraged over the severity of the rapper's sentence.

Before it was whisked off the schedule, social media was abuzz over news of the hearing. An Instagram post from NBA superstar Lebron James had garnered over 280,000 likes alone by Friday night.

Although prosecutors and Mill's probation officer both recommended against prison time, Brinkley sentenced Mill to two to four years in prison earlier this month for violating his probation.

Brinkley also cited a failed drug test and a pair of 2017 arrests in connection with a fight with a fan in St. Louis (those charges were later dropped) and illegal dirt-bike stunts in Manhattan.

Mill, 30, was first booked at the State Correctional Institution at Camp Hill last week before being transferred to the state prison in Chester. Due to his celebrity status, he was placed in protective custody there, according to The Associated Press. 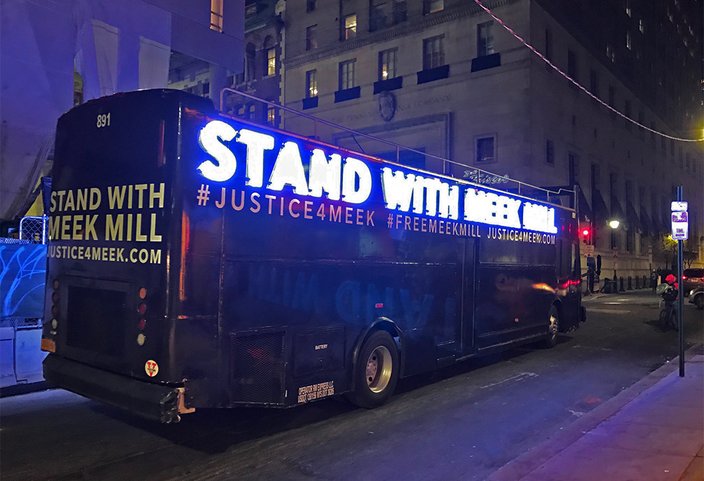 Billboards, buses and bus shelters reading "Stand with Meek Mill" have been seen all over the city since Brinkley's decision.

More than 380,000 people have signed a petition asking the Pennsylvania Board of Pardons to grant relief in Mill's sentence.

Earlier this week, Mill's lawyers asked Brinkley to step down from the case before he appeals the sentence, alleging that she stepped beyond her judicial bounds numerous times and made the case inappropriately personal.