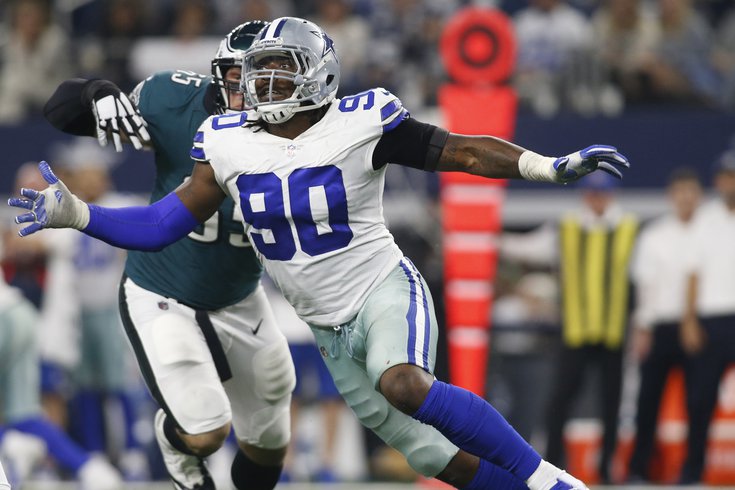 DeMarcus Lawrence will reportedly be out for around two months.

During the NFL's Thursday Night Football season opener, the Dallas Cowboys lost a heartbreaking, gut punch game to the Tampa Bay Buccaneers. Since that loss, the Cowboys have learned that they will be without four key players for varying — but substantial — amounts of time. Let's review them one-by-one.

Collins was suspended five games by the NFL for violating the league's policy on substance abuse. Collins reportedly did not test positive for any banned substances. However, according to Jason La Canfora of CBS, he missed seven tests.

Jerry Jones said that Terence Steele would start in Collins' place on Sunday against the Los Angeles Chargers. Steele is a second-year player who started 14 games for the Cowboys in 2020. The Eagles wrecked Steele in a win over the Cowboys in November last season.

MORE: WTS: Where does Eagles' Jalen Hurts rank among NFL QBs? | Eytan Shander: How the Eagles can continue to prove their doubters wrong | Recap: Eagles chat with Jimmy Kempski

WR Michael Gallup out a minimum of three games

Gallup injured his calf in the loss to the Bucs, and the Cowboys subsequently placed him on injured reserve. He'll be out at least three weeks. In 2020, Gallup had 59 catches for 843 yards and 5 TDs. He is sort of the third guy in the Cowboys' extremely talented WR trio, alongside Amari Cooper and CeeDee Lamb.

The oft-suspended Gregory has missed 58 games since the Cowboys selected him in the second round of the 2015 NFL Draft. In Week 1, Gregory played 37 snaps and recorded one tackle.

Gregory is reportedly asymptomatic and vaccinated, so he only needs two negative tests — with 24 hours in between them — to be able to return to the field. He could be out this Sunday against the Chargers.

DE DeMarcus Lawrence will have surgery on a broken foot

And finally, most devastatingly, Lawrence broke his foot in practice and will have surgery. He'll be out around a couple months, per Ian Rapoport.

From @NFLTotalAccess: The #Cowboys lost their best defender for about two months, as Demarcus Lawrence goes down with a broken foot in practice. pic.twitter.com/KYoU6PDA3S

Lawrence is by far the Cowboys' best player on defense, but more importantly, he's also really their only good defensive lineman. It's a potentially devastating loss for a team that will now field one of the worst defensive lines in the NFL until he returns.

On the bright side for the Cowboys, Zack Martin returned from the COVID list, and will play on Sunday, barring any surprises.