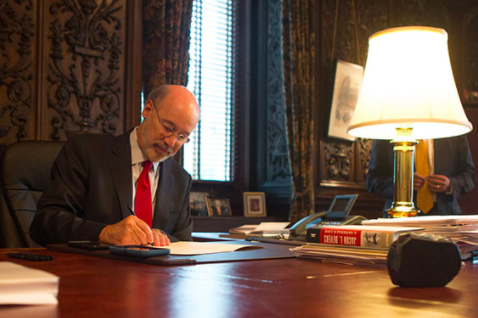 Courtesy of/Office of the Governor of Pennsylvania

Gov. Tom Wolf signs a bill preventing state boards from denying professional licenses to people on the basis of their criminal histories.

The new law lowers barriers for people with criminal histories, allowing them to obtain professional licenses issued by the state.

The boards in charge of approving licenses can still deny people with a criminal record if their criminal histories directly relate to the occupation for which they are seeking a license.

"Arbitrarily denying someone a job license because of outdated rules against criminal records is wrong," Wolf said Wednesday. "This new bipartisan law is a common sense way to allow people to pursue the American dream and build a better life in Pennsylvania."

Changes apply to the 29 different occupational licensing boards that exist in Pennsylvania. Among them are boards designated for accountancy, cosmetology, dentistry and massage therapy.

The new law targets "skilled workers," a term which technically refers to work that requires additional education or schooling past a high school diploma, Wolf added.

"It’s good for skilled workers, their employers and the economy for all of us," Wolf said.

The law does not affect "unskilled" or "low-skilled" workers with criminal records. Both terms have come under criticism by labor advocates who think the categories devalue employees who typically receive lower wages.

Additional protections for workers in the law include banning licensure boards from considering juvenile and expunged records. Also, temporary licenses lasting one to two years can be issued for barbers and cosmetologists trained inside of correctional facilities.