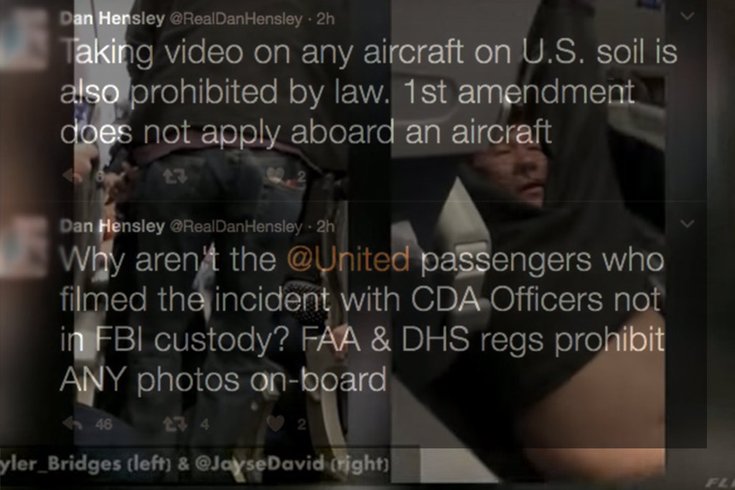 When online journalist Dan Hensley asked on Twitter why the United Airlines passengers who filmed the incident in FBI custody, incredulous strangers who couldn’t figure out why she was defending the security officers who roughed up a doctor who didn’t want to give up his seat.

Update: Dan Hensley returned to Twitter on Friday with a new handle.

Into that maelstrom waded Dan Hensley of Chicago with a question that drew the ire of masses.

“Why aren’t the @United passengers who filmed the incident with CDA Officers not in FBI custody? FAA & DHS regs prohibit ANY photos on-board,” tweeted Hensley, an online journalist with Chicago 1 News who made clear the question was not asked on behalf of her outlet.

What ensued for Hensley was three days of back-and-forth with incredulous strangers who couldn’t figure out why she’d come to the defense of those who roughed up a doctor who didn’t want to cede his seat to an airline employee when told to do so.

The online discussion confusingly veered off into a slew of topics that put Hensley at political and ideological odds with others who weren’t inclined to bite their tongues.

They include the “need for a federal economic terrorism law” to charge protesters whose actions impact corporate bottom lines. And the fact that wrongful convictions don’t exist. And how the poor are “nasty f******- criminal pieces of lazy and unproductive s***. They should be gassed.”

(You can still see half of the discussions on Twitter, but it’s difficult to recap all of the specific topics since Hensley deleted her account by Thursday morning. On Friday, she explained that she couldn't let people run her off Twitter upon returning to the social-media platform.)

“I was led to close the Twitter account because of violent threats to my safety,” explained Hensley, asking me not to include her photo with this story as a result.

"I saw a great opportunity to use the United Airlines scenario as THE perfect moment to be that voice of unpopular and even ridiculous speech." – @RealDanHensley

On Thursday, I wrote to Hensley via Chicago 1 News’ Facebook page requesting an interview about “being on the receiving side of an online avalanche of criticism.” (Yes, I admitted I'd been part of the anti-Hensley crew.)

Hensley's words had been written about (see here, here and here), but I hadn't seen an explanation from the writer herself.

Well, a couple hours later, an email from Chicago 1 arrived in my inbox. Over the course of nearly 1,000 words, she answered my questions. A lightly-edited version of that email appears below, with standout quotes bolded.

This is Mrs. Hensley returning your communication. Thank you for contacting me regarding the recent viral criticism I've faced.

First, let me make very clear that at no time did I speak as a Journalist for my new and growing corporate brand, "Chicago-One News", which is separate from my other work as a media personality of sorts, which, at times, can be very controversial.

What I do is an art and a skill. When I'm acting as a media personality/entertainer, my style is a unique mix of several well-known comedians who used their talents and gifts to hit hot areas of contention at various times of our nation's history.

I also use my own dramatic flair and pure political speech to engage the audience. George Carlin is a huge influence of mine. Howard Stern, Sam Kinison, Lenny Bruce is another. All of these great men have something in common: the ability to wake up people's emotions, even when they were being utterly ridiculous.

There is NO right more sacred than the First Amendment. Speech and counter-speech, no matter how emotionally charged and contentious, are what our nation thrives upon.

That being said, it's MY observation that our nation has come to a crossroads over the last 4 to 6 years whereby mobs of people from either side of the political aisle are using the ages old "shout-down" technique to drown out speech they don't want to hear. When this happens, the voices of people who aren't in either majority political parties effectively become muted and lost in the sea of back and forth rhetoric and shouting. We cannot allow for that because it endangers the very premise of the 1st Amendment, which is to protect what we'll call "speech minorities" and those who bring forth ideas and speech that are unpopular, controversial, even downright insensitive and dismissive, hateful, and indifferent.

I think one of the most important things I did was to remind people that there are people who think along the lines of the various things that were part of my parody & satire act. Yes, I did tweet out that my account isn't a parody account, and that is true, but that didn't mean my speech itself wasn't parody and/or satire. Everything was ad-libbed in the moment.

Let's first get into the legal side of things:

The Lectric Law Library has a very well-written piece by the ACLU, titled, "ACLU Briefing Paper Number 10." The First Amendment Center on Electronic Speech and who the media can be. There was also Reno v. ACLU, 521 U.S. 844 (1997) in which SCOTUS said the Internet is protected by the First Amendment to the Constitution which means that your right to freedom of speech applies while online.

All of this being said, I saw a great opportunity to use the United Airlines scenario as THE perfect moment to be that voice of unpopular and even ridiculous speech to highlight the intersections of the litany of very serious issues that our society is facing.

The United Airlines incident was THE time and place for the public to see that some of the more contentious things and even the more ridiculous things I've said were needed so people WOULD question, react, criticize, and make their own emotional, moral, social, and political investment in the marketplace of ideas and speech. The perfect storm occurred.

I should add in the context of the airline photography and video recording issue: THAT specific tweet was the building block for everything. Airlines and government often don't like photography or video recording in or around aircraft and in or around airports, even though there is no federal statute prohibiting it. Yet, these same airline and government workers will say there is, and will dance around referencing it. This is another danger to the 1st amendment.

The BIGGEST problem today is that people will retort to speech they don't like by accusing the speaker of mental illness, which does direct harm to those who actually DO suffer from mental illness by stigmatizing and trivializing mental illness (a medical problem). We witnessed a lot of that (Wednesday) night, especially with inaccurate references to Autism and using Autism as a joke. Speech is also NOT a symptom of mental illness.

The next sets of problems we see quite often are people making violent threats. Last night, I was threatened with rape by one user who was reported to Twitter. I received other violent threats as well.

I pointed out in one of my tweets that we are seeing a problem whereby there's still an issue of people not being able to handle unpopular speech. The culture we're in today is one in which everyone wants a "safe space", and they want the very havens of free speech, and the marketplace of ideas to become that "safe space" where only certain speech is allowed, and THAT is a DETRIMENTAL threat to the very underpinnings of free speech that our nation and collective culture were founded upon. Somehow, this idea – a very specious, dangerous idea at that – has propagated that there's a right to be comfortable and only see or hear speech that makes you feel good. NO! Absolutely NOT!

The world of online speech and sharing of ideas is challenged in regards to how people read and understand what's being put across. People take things literally. They need to step back, breathe, and evaluate. When people have these knee-jerk reactions, they deprive the speaker of the intent, spirit,and meaning of their speech. We falsely equate speech, in real life and online, with a person's personal character. That's really nefarious.

What I did was to hold a mirror up and become, in a sense, the reflection in that mirror so everyone could see themselves as a collective society the world around. When it comes to speech rights, the hypocrisy is based on politics versus facts. There's the issue of "fake news" which is most times either satire, parody, and/or political speech from people with views that are unpopular. That's treading in dangerous waters to label everything fake. Yes, there are misleading media efforts going on and people have to fact check for themselves.