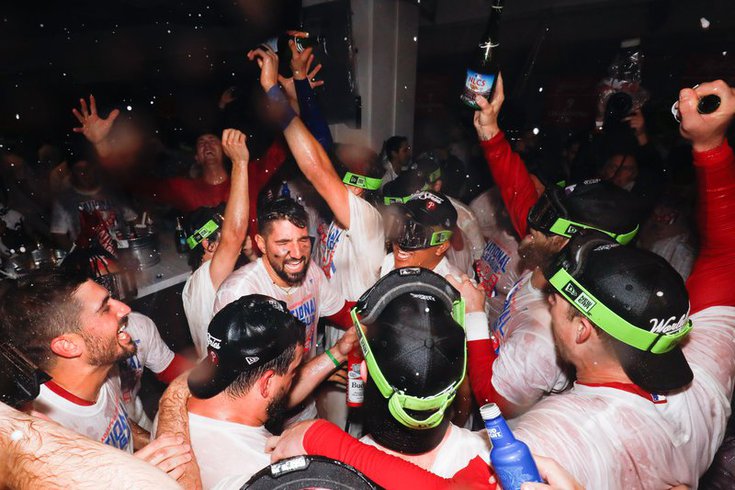 Calum Scott, the singer of the "Dancing On My Own" remix that became the Phillies' post season anthem, expressed gratitude to Phillies fans for his 2022 success on Spotify. Above, the team celebrated in the locker room after winning the NLCS against the San Diego Padres in October.

While many music fans took to social media this week to share what their "Spotify Wrapped" revealed about their listening habits, one musician expressed gratitude to Philadelphia sports fans.

Calum Scott became a household name in Philadelphia this fall when his remixed cover of Robyn's "Dancing On My Own" was used by the Phillies as a celebratory anthem during a postseason run that led them all the way to the World Series. Now, Scott is thanking Philly fans for contributing to his skyrocketing success in 2022.

MORE: 'Jeopardy!' champ Ryan Long says he hid his intelligence to fit in as a child

The English singer-songwriter took to Twitter Thursday to post his Spotify statistics. At 1 billion, his streams nearly doubled from the year before. The amount of hours that users listened to Scott's music also nearly doubled to 50.6 million, while his listeners rose by nearly 40 million to reach 99.9 million.

When I say, I cannot thank you enough, you know that includes the @Phillies and all their fans too right??! I love ALL o’y’all 💙 https://t.co/P84OxkH6XU

"When I say, I cannot thank you enough, you know that includes the Phillies and all their fans too right??!," Scott said in the tweet.

Many Phillies fans replied to Scott expressing their own appreciation and videos of fans celebrating to the tune. The Phillies own Twitter account replied, "philly loves you back."

In case you missed the song's Philly connection: On Oct. 8, after beating the St. Louis Cardinals 2-0 and winning their first playoff series in 12 years, the Phillies celebrated in their clubhouse with champagne showers and a dance party. "Dancing On My Own" got the festivities going, capturing media attention and taking the city by storm.

The Phillies all BELTING out Robyn's Dancing On My Own is killing us 😂😭 pic.twitter.com/CObR5RigAj

"Dancing On My Own" continued to be used by the team to celebrate each major milestone all the way through the World Series.

Bryce Harper being interviewed after the Phillies just took a 2-1 world series lead over the Houston Astros with "dancing on my own" playing in the background. pic.twitter.com/c92SR2KDNH

In the above clip, Phillies star Bryce Harper is interviewed after the team took a 2-1 World Series lead over the Houston Astros, and the entire stadium can be heard singing along to "Dancing On My Own."

One could scarcely walk a few blocks in Philly this fall without coming into contact with the song. The song was played twice per day in Rittenhouse Square during the team's playoff run, the Philadelphia Orchestra and Snacktime band covered the tune, and backup catcher Garrett Stubbs even had its lyrics sewn into a custom suit for the World Series. After the team's Game 3 NLCS win, the song was blasting so loud that it could be heard from over a mile away, according to a video posted by one Twitter user.

A result of all the celebratory jam sessions led to a return to the charts for the 6-year-old song. On Oct. 15, the day the Phillies eliminated the Braves in the NLDS, the song received nearly 254,000 official on-demand U.S. streams, a 45% increase from the previous week, and rose into the Top 10 on the real-time iTunes top 100 chart. The song also exploded in sales, from a negligible daily amount to nearly 1,100 combined copies during one weekend in October.

Along with rising on charts and sales, "Dancing On My Own" also saw a spike in Google searches, soaring the week of Oct. 8 when it was first publicized as a celebratory song for the team. It peaked the week of Oct. 23 to Oct. 29, the week leading up to the World Series.

Scott has seemingly enjoyed the resurgence of his 2016 song. He shared photos of the Phillies celebrating to "Dancing On My Own," congratulated the team on becoming National League champions and even tweeted that he would be "down" to play at the World Series, although the performance didn't come to fruition.

"Dancing On My Own" was originally released in 2010 by Swedish singer-songwriter Robyn, who croons about heartbreak against an electric beat. Then, in 2016, Calum Scott, a competitor on "Britain's Got Talent," released his slowed-down cover of the song, which he performed on the show while he was a contestant in 2015.

Scott teamed up with Dutch DJ and music producer Tiesto on a dance remix of his version, which was released in 2016 and was subsequently included on Scott's 2018 album, "Only Human." It was this version that became the Phillies' anthem.

For those wondering why the Phillies were jamming to the song in the first place, it surprisingly traces back to the Boston Red Sox, according to the Inquirer. Backup catcher Kevin Plawecki chose the dance remix as his walk-up song during the 2020-21 season, which featured a sadly empty Fenway Park due to the COVID-19 pandemic. The rest of the team began enjoying the song, so much so that the team celebrated with it in the locker room following their win over the Tampa Bay Rays in the 2021 American League division series.

Phillies slugger Kyle Schwarber was on that Red Sox team, and he liked the song so much he brought it over to his current team. It is now a fixture on backup catcher and "team DJ" Stubbs' post-game celebratory "Phils Win" playlist, which is nearly five hours worth of upbeat songs spanning all genres.

Many Phillies fans ended up with "Dancing On My Own" on their own Spotify Wrapped roundups, having streamed the song throughout the team's "Red October." Despite falling to the Astros in the World Series, fans expressed nostalgia for the exciting World Series appearance and the song that became its soundtrack.

The only thing I got out of my Spotify Wrapped is we really enjoyed “Dancing On My Own” for quite a long time.

Wanna give a shoutout to the @Phillies and @kschwarb12 for making Dancing On My Own my most listened to song this year. #SpotifyWrapped #GoPhillies

Thanks to the @Phillies and @calumscott dancing on my own is on my @Spotify wrapped!

Thanks @calumscott for spending 926 minutes with me in 2022. I couldn’t stop listening to Dancing On My Own - Tiësto Remix. #SpotifyWrapped https://t.co/897Vb6dFl8

when Dancing On My Own comes on the Spotify Wrapped playlist pic.twitter.com/2MSKNYMUev

My #SpotifyWrapped says Dancing on my own was my most listened to song and I never heard it before October! 😂 pic.twitter.com/8yDE4FLhyc