Philadelphia Orchestra, Snacktime each cover 'Dancing On My Own' ahead of World Series

The Phillies' unofficial playoff anthem peaked at No. 6 on the iTunes top 100 earlier this week 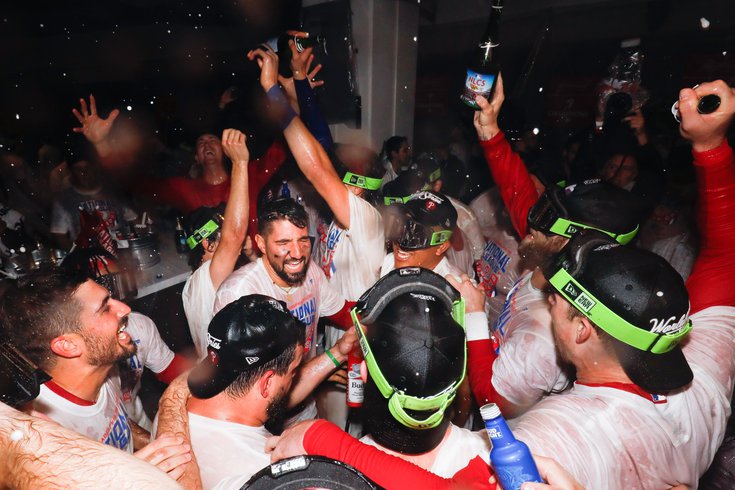 The Philadelphia Orchestra and Snacktime, a brass band, each have released their own renditions of 'Dancing On My Own,' the Phillies unofficial playoff anthem. Above, the team celebrates in the locker room after winning the NLCS against the San Diego Padres on Sunday.

With the Phillies set to open the World Series against Houston Astros on Friday night, some local performers have put a Philadelphia spin on "Dancing On My Own," the team's unofficial playoff anthem.

The pop ballad originally was recorded by Swedish singer Robyn in 2010 before Calum Scott released his own downtempo cover in 2016, which was later remixed by Tiesto. But the song regained attention earlier this month after a videocameras caught the Phillies singing along to the remix while celebrating their Wild Card series victory over the St. Louis Cardinals.

Since then, the song has taken on a new meaning for Philadelphia sports fans, all too eager to cheer on their beloved team as they make their first World Series appearance in 13 years. To celebrate, the Philadelphia Orchestra and Snacktime have released their own covers of the song.

Snacktime, the seven-piece brass band that gained regional fame after a series of performances at Rittenhouse Square in 2020 and 2021, recorded their version of the song at the WXPN studio on Thursday. Originally intended to be a birthday gift for co-founder Sam Gellerstein's girlfriend, the cover turned into a tribute to the Phillies after becoming synonymous with their postseason success.

"After the locker room video went viral, I quickly understood that this song was definitely going to stay in our repertoire and it was unfortunately no longer able to be a birthday surprise," Gellerstein told the Inquirer.

The Philadelphia Orchestra followed the band's lead, releasing their own rendition of "Dancing On My Own."

The song was arranged for a full orchestra by Jim Gray, a composer also responsible for the orchestra's rendition of "Fly Eagles Fly," released on the day the Eagles became NFC East champions in 2017. The orchestra members dressed up in their favorites Phillies gear while performing Gray's arrangement, conducted by musical director Yannick Nezet Seguin.

"The Philadelphia Orchestra takes great pride in our city, and we wanted to help celebrate this exciting moment by spreading joy in the best way we know how — through music," said Ashley Berke, the orchestra's chief communications officer.

In a not-so-shocking twist, Phillies celebrations have brought "Dancing On My Own" back on the charts. On Tuesday, the song hit at No. 6 on the iTunes real-time top 100. It currently sits at No. 27.

On Saturday, Oct. 15, the day the Phillies eliminated the Atlanta Braves in the National League Division Series, the song received nearly 254,000 on-demand U.S. streams, according to Billboard, a 45% increase from the previous Saturday. Though the song has not charted on the Billboard Hot 200 since its original release in 2018, it has certainly taken Philadelphia by storm.

The song also has been played twice per day in Rittenhouse Square since Oct. 19 as part of the citywide celebration.

Phillies fans preparing to watch the World Series this weekend can get pumped up by turning on backup catcher and team DJ Garrett Stubbs' "Phils Win" playlist on Spotify. Fans also can check out the team's World Series hype video.

When the Phillies return home to Citizens Bank Park for Games 3 and 4, fans who don't have tickets can join watch parties at Xfinity Live! and the Wells Fargo Center.