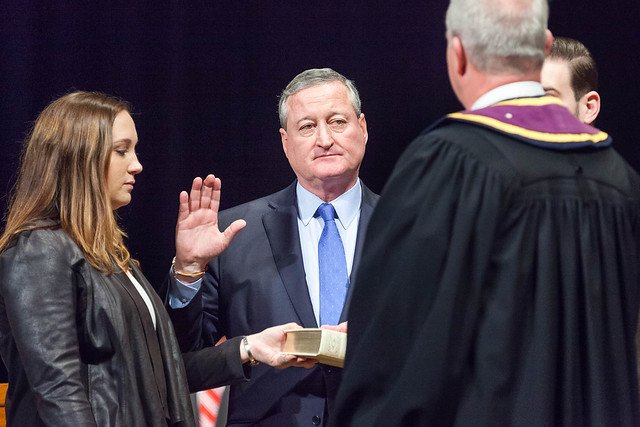 Jim Kenney's daughter, pictured here with the mayor during his 2016 inauguration, pleaded guilty to disorderly conduct and ordered to pay a fine for a fight in North Wildwood last month.

The daughters of Philly Mayor Jim Kenney and a North Wildwood official pleaded guilty to creating a public disturbance during a street fight at the Jersey Shore last month.

Nora Kenney, 25, of Philadelphia, and Tara Tolomeo, the 27-year-old daughter of of North Wildwood Councilmember Kellyann Tolomeo, will each have to pay $200 in fines and $33 in court costs, the AP reported.

The incident occurred last month in North Wildwood, but the case was moved to Sea Isle City due to the potential conflict of interest with Councilmember Tolomeo.

Police said the fight happened on the street at 1:40 a.m. on Aug. 11 in Wildwood's nightclub district. Tolomeo and Kenney were arrested by two local officers who were on duty patrolling that evening. The two women were charged with disorderly conduct.

Kellyann Tolomeo has served on the North Wildwood City Council since 2007 and represents the city's second ward. She was born and raised in Philadelphia.