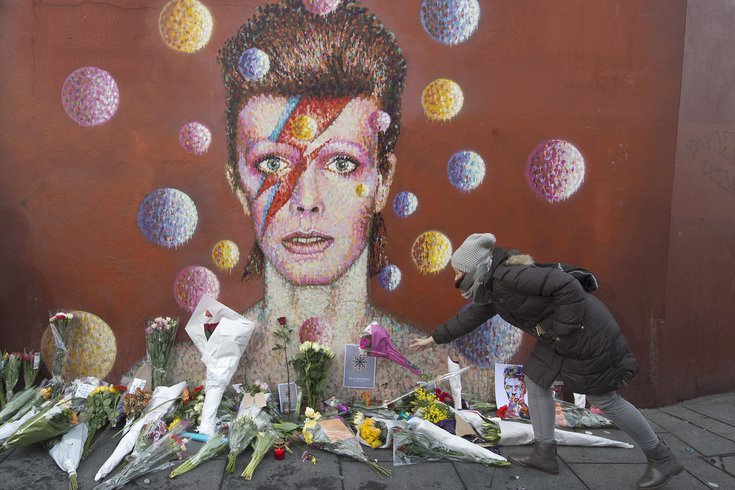 The National Liberty Museum is celebrating Philly Loves Bowie Week with "Deconstructing Bowie: Freedom in Eccentricity," which will run from January 7 until April 3 in honor of the life and artistic legacy of David Bowie. Above is a photo of the Bowie mural in South London.

David Bowie loved Philadelphia, and it loved him back. From recording his first live album at the Tower Theater in Upper Darby, to filming a music video for "Modern Love" at Spectrum Arena during a four-performance stint, the Starman shined bright across the city.

Following his death in 2016, local organizers and fans tried to think of a way in which to honor the artist's legacy. They came to establish Philly Loves Bowie Week, a celebration of his life and memory complete with events and a silent auction each year.

As part of the fifth annual Philly Loves Bowie Week, the National Liberty Museum has created an exhibit titled "Deconstructing Bowie: Freedom in Eccentricity," which opens on Friday, Jan. 7, and runs until Sunday, April 3.

A reception was originally set for Friday's opening day, but it has since been rescheduled for Thursday, March 10. The event will run from 5:30 until 8:30 p.m. and tickets are free with museum admission.

According to the museum, "Deconstructing Bowie" is about the power of music and art to challenge cultural perceptions and expectations in order to drive change.

"Through music, art, and fashion, Bowie disrupted and rebelled against societal expectations and norms, introducing new and more critical ways of thinking about race, sex, and gender," the museum said in a statement. "This exhibition celebrates David Bowie’s legacy in the creative freedom he inspired in generations of artists that have followed in his wake, artists who have continued to push boundaries and inspire others to do the same."

All of the artwork shown in the exhibit is for sale, with a portion of the proceeds being donated to Children's Hospital of Philadelphia's Cancer Center. Since its inaugural celebration in 2017, Philly Loves Bowie Week has donated nearly $50,000 to the center.

The National Liberty Museum is open Thursday to Monday from 10 a.m. until 5 p.m., and rates of entry begin at $12 for adults, $10 for seniors, $8 for students with valid ID, $6 for children aged 6-17, and free for children under 5 and museum members. Tickets are available for purchase both online or at the museum.

Masks are required at all times in the museum regardless of vaccination status.