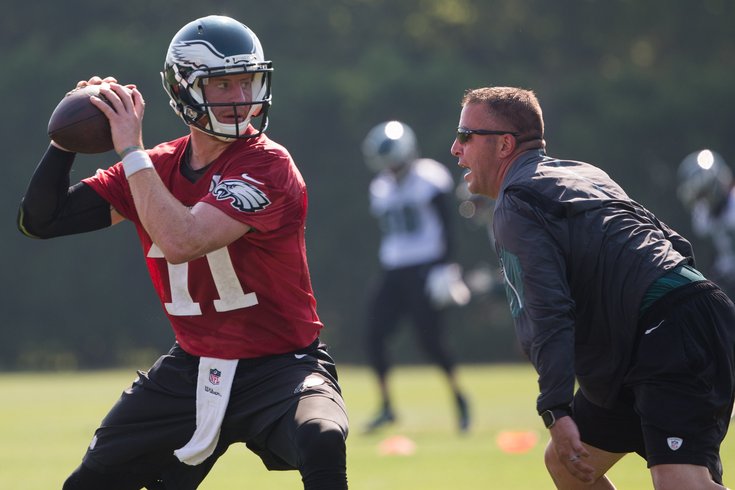 John DeFilippo admits this was a tough decision – gut-wrenching is the way the now-former Eagles’ quarterbacks coach put it. It stung him to tell Eagles’ head coach Doug Pederson, vice president of football operations Howie Roseman and owner Jeff Lurie that he was moving on, taking the offensive coordinator position in Minnesota.

DeFilippo, who will turn 40 in April, was bound for this — and probably even greater things ahead. He was a head coaching candidate for the Chicago Bears and comes with a glowing recommendation from none other than the Super Bowl LII MVP himself, Nick Foles, who also foresees DeFilippo as a future NFL head coach.

“I worked with him every day, I was around him every day, he grinds, he was focused on us, but I know he’ll be a great head coach someday,” Foles said. “He has a lot of great things on the horizon.”

In a short span, DeFilippo was responsible for giving the Eagles the best quarterback room in the NFL. But the Radnor High School and James Madison University graduate won’t take credit for it.

“The Eagles, Coach Pederson and the Eagles organization, will always be family to me – I mean, what a special season,” said DeFilippo, who’s been credited with the quick maturation of Carson Wentz and the continued development of Foles and Nate Sudfeld. “To be able to do what we did, in an area where I went to high school, and to give a city and an owner something that was long overdue, was a really special thing for me.

“Coach and Frank did a lot of the grunt work, and they deserve a ton of credit on how we performed offensively this year, but all of us on offense had a piece,” DeFilippo said. “[Offensive line coach] Jeff Stoutland is awesome. He’s kind of the head coach of the run game, so to speak. It was a really good mix. Coach Pederson did a heck of a job of putting together an excellent coaching staff. I couldn’t be happier for Frank getting the Indianapolis job.

I’m not going to lie and say that one didn’t sting a little bit. It was gut-wrenching, there’s no doubt. I was still able to go to parade. I wasn’t going to miss it.

“I learned a lot with the Eagles. The biggest thing I learned from Coach Pederson is always staying aggressive, and keeping the pedal to the metal and wearing guys down, all of those things that he would preach. He not only preached it, he showed it on Sundays in his play calling. It’s true when Coach says he wants to score on every play.”

One thing DeFilippo also stressed is that the Eagles are probably the deepest at the quarterback position. They have an MVP-caliber quarterback in Wentz as the starter, and a Super Bowl-winning quarterback in Foles backing him up. Then there’s Sudfeld, who showed flashes in the season finale against Dallas that he, too, could be very good.

“We went back into game film, among other things, that we saw what Nick does well. Coach allowed everyone to have input. Howie and Joe [Douglas, vice president of player personnel] made sure there were quality guys in that quarterback’s room. Those three guys are bright guys who love football. They see the game as well as anyone I’ve ever bene around. I mean all three of those guys.

“Those three guys are as good as it gets. From Day One, the first day of training camp, I told those guys I wanted every one of them to walk around the building as if this was the best quarterback room in the NFL, because it is, it is. I can’t take any credit for it. All I know is I tried to set the tone, bringing energy, passion and swagger every day. That was my job, and I was fortunate that I had a bunch of very special guys that bought in.”

DeFilippo admitted he had a tough time telling Pederson, Roseman and Lurie that he was going to the Vikings.

“It’s hard to leave places like the Eagles, because there aren’t a lot of organizations like it in the NFL,” said DeFilippo, who’s been coaching for 18 years, 12 were spent coaching in the NFL. “Obviously coming off the year we had was very, very special. Telling Coach Pederson and leaving Coach Pederson was probably one of the most gut-wrenching experiences I’ve had since I’ve been coaching.

This team will go down, in my mind, as one of the greatest teams in the history of the National Football League, top to bottom.

It looks like the Minnesota Vikings will be visiting Lincoln Financial Field to open the 2018 NFL season possibly on Thursday. It will be an emotional homecoming, in a sense, for DeFilippo, who played a major role with and who will never forget the 2017 Super Bowl champion Philadelphia Eagles.

“This team will go down, in my mind, as one of the greatest teams in the history of the National Football League, top to bottom,” DeFilippo said. “Not only from a talent standpoint, but the character standpoint of buying in. It starts from the top in Mr. Lurie, and I’m not sure if the word ‘No’ ever comes out of his mouth. He provides you with whatever you need.

“It starts there and trickles down to the personnel office, coaching, the players, and everyone taking pride in their job. The weight staff. The equipment staff. The sports science staff. There is so much support there for everybody. This is a team you don’t forget. This was a special group. I’m leaving here but I will always be a part of something special.

“I was on Bus One, loving life during the parade. You couldn’t have capped the season off in a better way than that. I told my wife when we were on the bus that it’s really cool to be a part of something where you make so many people so happy. That’s what this team was all about this year. Making each other happy by working hard, the coaches putting together the best game plans we can put out, and that equated into a lot of people feeling really, really good about our team.”