The city is preparing for the culmination of the trial of the former Minneapolis police officer charged with killing George Floyd; closing arguments take place Monday 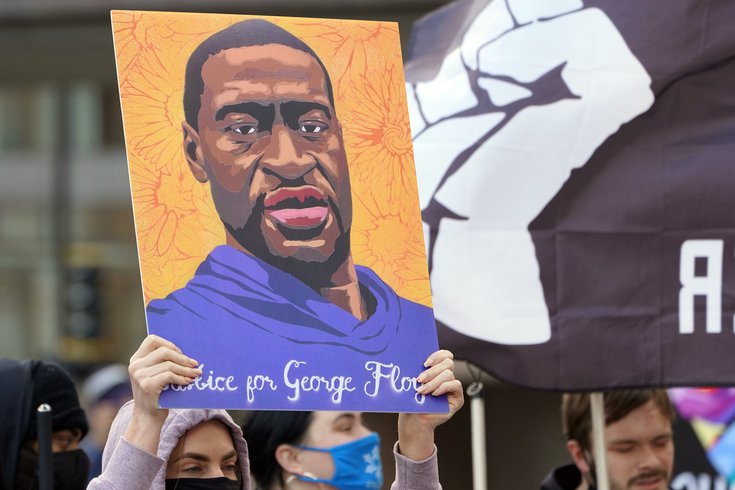 Above, a woman in Minneapolis during the trial of former police officer Derek Chauvin holds a picture of George Floyd, the man who was killed while in Chauvin's custody last year. Closing arguments in Chauvin's murder trial begin Monday and there could be verdict next week. On Friday, Philadelphia Mayor Jim Kenney urged city residents demonstrate peacefully no matter how the trial concludes.

Mayor Jim Kenney penned an open letter to Philadelphia residents ahead of the verdict in the trial of Derek Chauvin, the former Minneapolis police officer accused of murdering George Floyd.

Kenney reflected upon the racial justice demonstrations that followed Floyd's killing last May, calling it a "tipping point" for communities that have endured centuries of racism and unjust treatment. He also urged residents to demonstrate peacefully — no matter the trial's outcome.

Closing arguments are set to begin Monday. Jury deliberations will follow and a verdict potentially could be reached early next week.

"And on the day of the verdict — whenever it may be — we will be calling for citywide prayer, so we can honor the memory of George Floyd and other Black Americans whose lives were tragically cut short because of brutality, racism, systemic failures and deep societal inequities," Kenney wrote.

Floyd's killing sparked nationwide protests last spring as people took to the streets to decry police brutality and other racial injustices. Most demonstrations remained peaceful, but some turned destructive.

In Philadelphia, an initial Center City protest devolved into chaos. Businesses were looted and police cars were burned, prompting Kenney to institute nightly curfews. The daily demonstrations that followed were mostly peaceful, but the city's police department drew sharp criticism its their response — most notably for deploying tear gas on protesters who gathered on I-676.

In his letter, Kenney admitted his administration made mistakes. He also acknowledged that Black people have been treated unjustly by law enforcement, saying the verdict will remind people of the "centuries of inequities and systemic racism that have brought us to this moment."

"This is a call for active peace," Kenney wrote. "So when the verdict comes, no matter the outcome, let us resolve to demonstrate peacefully, to voice the pain and anguish loud and clear but without destruction, and let us stay united working to ensure that Black lives matter today—and every day.

"In the meantime, we need to remember that we must still stand together as Philadelphians," Kenney also wrote. "We need to remember our neighbors who own small businesses and stores along our commercial corridors. We need to look out for each other."

The full letter — which also outlines the criminal justice reforms undertaken by Philly officials — can be read below.

In the coming days, a verdict will be rendered in the criminal case against former Minneapolis police officer Derek Chauvin, who is charged with the murder of George Floyd. The decision will be reached almost one year after Mr. Floyd was killed on the ground under the knee of an officer sworn to protect and serve.

This is one of far too many cases of fatal police violence still happening across our country. Daunte Wright was shot and killed in Brooklyn Center last Sunday, and yesterday video was released in the police shooting death of 13-year-old Adam Toledo while his empty hands were raised.

Mr. Floyd’s killing was a tipping point for Black and Brown people and entire communities who have felt a life sentence of pain, fear, anger, and distrust for generations. It caused outrage, and in some instances, violence, by people desperate to be heard and understood.

Looking back to last spring and the demonstrations in our city, we know the police and my administration made mistakes in how we handled the protests. Tear gas should not have been used and we over-policed in some communities while others felt abandoned. As your Mayor, I vow to do better.

I’m committed to ensuring that we learn from our mistakes, demonstrate our accountability, and hold ourselves to a higher standard. Changing how we protect all of our residents is a priority of our administration. We are listening to members of the community—and in partnership with our Pathways to Reform, Transformation, and Reconciliation Steering Committee, we are reimagining our approach and efforts to keep ALL Philadelphians safe, while working to build a more equitable city for everyone. We’ve also made critical changes and clarifications to our policies, procedures and training, with more to come.

• We added mental health professionals to help screen 911 calls and identify signs of behavioral health crises.
• We expanded Crisis Intervention Training for 911 dispatchers and officers.
• We are piloting four co-responder teams that pair Crisis Intervention trained officers with behavioral health professionals, with plans for additional teams.
• We made it explicitly clear that sitting or kneeling on someone’s neck, face or head is absolutely prohibited.
• We implemented internal policies and procedures and consistent accountability measures to identify and remove dishonorable personnel more easily.

Waiting for the verdict is not the hardest part. It’s knowing that a life has been taken too soon and how unjustly Black and Brown people in this country are treated by law enforcement. It’s knowing that regardless of what the jury decides, the judgment rendered will retraumatize the victimized and remind us of the compounding effects of centuries of inequities and systemic racism that have brought us to this moment. It’s knowing that outrage may be felt once again.

All of us have the right to express our beliefs. We have the right to gather, march and protest peacefully and safely. Great progress has been made when we unite in a common cause for the greatest good, and peaceful protest is the American way. A “Know Your Rights” guide is available on the ACLU’s website.

If you need help, please know that mental and behavioral health supports are available. You can find them at healthymindsphilly.org or by calling 888-545-2600. We will also be hosting six virtual community healing circles over the next three weeks to provide safe spaces for neighbors to come together in solidarity, the first of which you can register for online.

And on the day of the verdict— whenever it may be— we will be calling for citywide prayer, so we can honor the memory of George Floyd and other Black Americans whose lives were tragically cut short because of brutality, racism, systemic failures, and deep societal inequities.

I have said many times: I cannot pretend to understand what it is like to be a Black person in this country. No white person can. But I do understand that the long history of Black people facing inequality and injustice, of being denied opportunities, and of being harassed, thrown in jail, and murdered because of a broken taillight or mistaken glance— all of that must end swiftly.

This is a call for active peace. So when the verdict comes, no matter the outcome, let us resolve to demonstrate peacefully, to voice the pain and anguish loud and clear but without destruction, and let us stay united working to ensure that Black lives matter today—and every day.