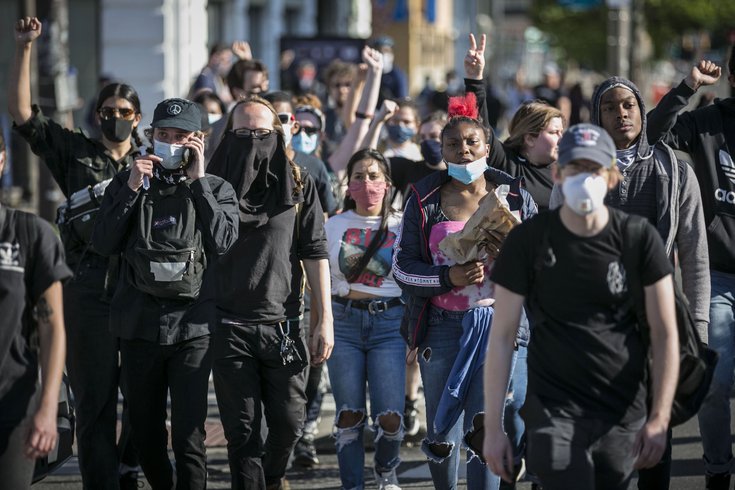 An audit of Philadelphia's response to protests after the police killing of George Floyd in Minnesota offers 77 recommendations for the city to improve its handling of civil unrest. The protests in May and June resulted in hundreds of arrests and the use of tear gas against demonstrators, some of whom have since filed lawsuits against the police department. The file photo above shows protesters on June 1, 2020.

Months after civil unrest swept across Philadelphia in response to the police killing of George Floyd, an independent audit has found the city lacked preparation and sufficient planning for the spontaneous nature of the events.

A 110-page report released on Wednesday offers 77 recommendations for the city and police department to improve their management of civil unrest, which faced sharp criticism for its heavy-handed tactics and disjointed command structure.

Floyd's horrific death in the the custody of Minneapolis police on May 25 became a tipping point across the United States, prompting protests against systemic racism in law enforcement and a glaring lack of consequences for abuse of police power against people of color.

In Philadelphia, protests that began peacefully on May 30 descended into chaos as rioters torched police vehicles at City Hall and looted surrounding businesses. The activity spread from Center City to other neighborhoods and commercial districts in the ensuing days and nights, creating a volatile mix of legitimate dissent and criminal activity.

In the aftermath of the unrest, Philadelphia hired Virginia-based research firm CNA Corp. and Philadelphia law firm Montgomery, McCracken, Walker & Rhoads to work together as independent consultants on an audit of the city's response to the Floyd protests.

"The analysis first revealed that the City and PPD were simply not prepared to address unanticipated mass protests coupled with civil unrest occurring in multiple locations throughout the city," the report stated, adding there was "no specific plan or playbook" to handle such a scenario, particularly in the midst of the coronavirus pandemic.

Large demonstrations and marches in West Philadelphia, on Interstate 676 and on the Benjamin Franklin Parkway were met by police, in several instances, with the use of less than lethal munitions such as tear gas, pepper spray and batons. Hundreds of protesters were arrested in the span of several days in late May and early June.

The highly publicized June 1 protest on I-676, during which police fired tear gas into the crowd of demonstrators on the highway, led to an apology from Police Commissioner Danielle Outlaw over the department's "unjustifiable" use of force, as well as a moratorium on tear gas use by officers.

One officer was fired and later charged after video showed him pulling down the masks of kneeling protesters to pepper spray them directly in the face.

The report highlights the impact of breakdowns in the police chain of command, which resulted twice in tear gas being used without direct approval from Outlaw, who had taken over as commissioner less than four months before the protests occurred.

The two firms tasked with completing the audit collected testimony and reviewed evidence provided by City Council, community members, city executives and PPD command staff and personnel. The city and police remained independent of the analysis.

"Beyond crowd control, concerns about PPD officers' demeanor and projection of a 'warrior mentality' were expressed by many community members," the report found. "There is a general skepticism about police stemming, in part, from the national conversation around police brutality and criminal justice reform. This conversation extends to residents' critiques of Philadelphia's own history of police-community relations."

During the Floyd protests, this mentality often led to what the analysis called an inability by police to distinguish between peaceful protesters and those engaged in criminal behavior, resulting in similar treatment toward both groups.

Key recommendations from the audit include developing a comprehensive plan and protocol for responding to civil unrest, with clear operational orders and staffing contingencies that enable a scalable, fully-resourced approach to lawful protests.

It also is urged that the police commissioner retain sole authority over the use of tear gas and that the use of a police baton to the head be considered deadly force. The analysis covers the use of a baton in this way by former police Inspector Joseph Bologna, who has since been fired and criminally charged after he struck and injured a Temple University student.

Elsewhere, the report offers recommendations on improved de-escalation training and consistency in police response to protests. Notable incidents in Fishtown and at Marconi Plaza in South Philadelphia were examined to illustrate selective law enforcement methods.

The audit identified the first three days of protests as the critical period during which city officials and police failed most to mount a coherent response to the unrest. Much of this was the result of inadequate planning and insufficient resources, but a significant share came down to poor strategic decision-making and the ill-advised use of force heightening tensions.

Still, the audit credited police for their dedication under the pressure of a rapidly evolving challenge.

"This analysis is diagnostic in nature and highlights issues," the authors wrote. "Early on, PPD staff demonstrated commitment to restoring order, and some members even self-deployed during the heights of the crisis. Many officers also displayed great restraint when faced with hostile and potentially dangerous situations, particularly aimed at them."

Philadelphia's response to civil unrest was again put to the test in October following the fatal police shooting of Walter Wallace Jr. in West Philadelphia. That incident, which sparked a similar combination of peaceful protests and opportunistic crime, remains under investigation with the Philadelphia District Attorney's Office and the Philadelphia Police Department's Internal Affairs unit.

In connection with the George Floyd protests, the department is facing two lawsuits over the use of force in West Philadelphia and on I-676.

"The PPD is a learning organization, and as such, we are dedicated to creating, acquiring, and modifying behaviors to reflect best practices," the police department said in response to the audit's findings. "The CNA report is a step forward in helping us implement policies and practices that reflect the organizational excellence for which we are striving, and that the people who live, work and visit Philadelphia deserve."