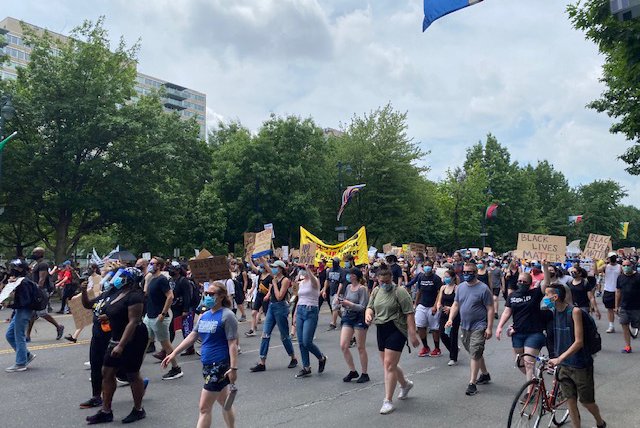 Demonstrators marched down the Ben Franklin Parkway on Saturday to protest the death of George Floyd.

Peaceful protests continued across Philadelphia for the ninth straight day on Sunday in the wake of George Floyd’s death, as demonstrators took to the streets to call attention to issues such as systemic racism and police brutality.

Several protests were scheduled to take place on Sunday afternoon across the city.

One of the demonstrations taking place on Sunday was held outside of Eastern State Penitentiary in Fairmount. The event, which was called “Free People Now!,” was put together by several local activist groups to call for the release of thousands of inmates who are vulnerable to contracting COVID-19 while in prison. The protest, which reportedly garnered hundreds of people, was also a call for justice after Floyd was killed on May 25.

Just ran into a protest of hundreds outside Eastern State Penitentiary that I didn’t even know was happening today! Love all these protests. Keep the momentum going, Philly! #PhillyProtests #Fairmount pic.twitter.com/paEPJhEdda


Protestors unveil a banner at the Eastern State Penitentiary.

They’re calling for the release of prisoners who are at high risk of COVID-19. #Philly@silvercloudnews pic.twitter.com/07Uz7CX4Iy

Mike Africa Jr on police who kneel with protesters: “They are trying to pretend that they are with us.” #freepeoplestrike pic.twitter.com/LPvzDrFL84

Another event called “Prayer for Philly” was held at LOVE Park on Sunday in Center City.


8 minutes and 46 seconds in the shadow of Love and prayers of resistance #phillyprotests pic.twitter.com/A9RasgF90i

A rally of nurses, doctors, and others took place outside the now-closed Hahnemann University Hospital calling out the racial inequality that exists in health care. The 100-year-old hospital closed down last summer after it was sold. Among those who showed up to the protest was city Councilmember Helen Gym.

Here with doctors, healthcare workers on the one year anniversary of the closing of #Hahnemann Hospital with a united call to end police brutality and racism in our healthcare. pic.twitter.com/JJ6x8qbJ9X

Here are some of the other scenes from protests across Philadelphia on Sunday.

Another day of peaceful protests in Philly pic.twitter.com/f2wCY35ces


Protest hopping for the Inquirer this beautiful afternoon in Philly. First stop, the PMA, where a rally for black art was getting started alongside joggers & folks posing for photos in their grad gowns pic.twitter.com/6MzUi0v5CV


Some Black Lives Matter protestors in Philadelphia have begun to gather at the Art Museum steps.

Some people are playing music and others have signs. #Philly pic.twitter.com/mfFCj0NDvX

Do something today - protest, learn, read, donate, reboot for tomorrow. Just do something meaningful and with intention. pic.twitter.com/UIlOd6oRaq

“Say his name,” a protestor shouted. “George Floyd,” the crowd yelled back. Police stood behind a metal barricade at police headquarters. Some officers held nightsticks under their arms, though they haven’t had to use them as of now. @PhillyInquirer pic.twitter.com/yH3EM73wGC

Hundreds more join the protests at the Philadelphia Police Station - these large protests are usually a collection of smaller ones. #phillyprotests pic.twitter.com/UNfN1gxCRJ

Floyd, a black man, was killed while in the custody of Minneapolis police after Officer Derek Chauvin knelt on Floyd's neck for nearly nine minutes as three other police officers watched.

Floyd's death has sparked demonstrations and protests over the past week calling out racial injustice in cities such as Philadelphia.

Sunday was also the first day in over a week that Philly didn’t implement a citywide curfew after having one in place for the previous eight days. Additionally, no traffic restrictions were put in place across Center City.

Those protesting have been encouraged to stay hydrated due to the warm temperatures, as well as to wear a face covering and practice social distancing whenever possible in order to prevent further spread of coronavirus.

Protesters should monitor themselves for COVID-19 symptoms and get tested a week after attending a protest, the city said.