Did you know Philly had an (angry) part in the founding of Mother's Day? 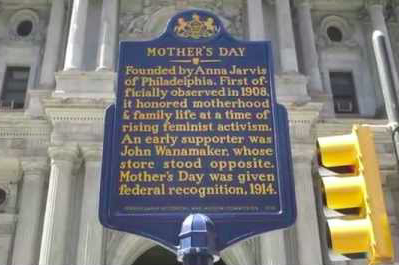 Are you spending quality time with your mom on this beautiful Sunday afternoon in Philadelphia?

There's a good chance you wouldn't be if it weren't for the actions of a forward-thinking woman whose outrage in this very city helped popularize the holiday during the first decade of the 20th century.

Anna Jarvis, an early feminist, held the first official Mother's Day in Grafton, West Virginia, and later that day in Pennsylvania, on May 10, 1908—three years after the death of her own mother. At the time, her modest intention was to create a sentimental occasion that would celebrate the maternal influences in all of out lives, symbolized by the white carnation emblem.

Historian Katherine Anatolini, who studied motherhood as a graduate researcher, compiled various quotes from Jarvis about her views on the holiday, including the meaning behind this carnation:

Its whiteness is to symbolize the truth, purity and broad-charity of mother love; its fragrance, her memory, and her prayers. The carnation does not drop its petals, but hugs them to its heart as it dies, and so, too, mothers hug their children to their hearts, their mother love never dying. When I selected this flower, I was remembering my mother’s bed of white pinks.

At the age of 12, Jarvis was motivated to start the holiday after her mother, Ann Reeves Jarvis, gave a Sunday school lecture calling for someone to mark a date commemorating mothers for their service to humanity, according to an account published Sunday by The Washington Post.

Anna took up her mother's appeal as a lifelong mission, campaigning as an adult for official recognition of Mother's Day. She wrote letters to everyone from Mark Twain to Theodore Roosevelt. By 1910, West Virginia passed legislation recognizing the holiday. Several states followed suit until Congress officially declared the second Sunday of May Mother's Day on May 8, 1914.

Ironically, the holiday's commercialization became a sore spot for Jarvis for the rest of her life. That's where Philly comes into play. A friend of local merchant and civic leader John Wanamaker, Jarvis attended one his tearoom parties and ordered a dish called the "Mother's Day Salad." Upon receiving it, she summarily dumped it on the floor, incensed that her hard work had become a tag line and slogan.

For all posterity, a newspaper account of the incident helped solidify Jarvis as the authentic, if dogmatic, face of Mother's Day.

As the novelty and floral industry swooped in on the Mother's Day bonanza, Jarvis became increasingly disappointed in the cheapening of the holiday's meaning. In one commentary collected by Anatolini, she fumed over common practices adopted on Mother's Day:

A printed card means nothing except that you are too lazy to write to the woman who has done more for you than anyone in the world. And candy! You take a box to Mother—and then eat most of it yourself. A pretty sentiment.

Jarvis, who never had a child herself, kept up her fight against commercial forces into old age. She died at in a sanitarium at 84 years old.

Ultimately, despite her misgivings, Anatolini believes Jarvis would be heartened to know that Mother's Day remains such a widely celebrated and important family holiday. In Philadelphia, an official plaque at City Hall ensures that her efforts will forever be memorialized.