Doc's Return: Halladay on coaching, the Hall of Fame, and possible permanent role with Phillies 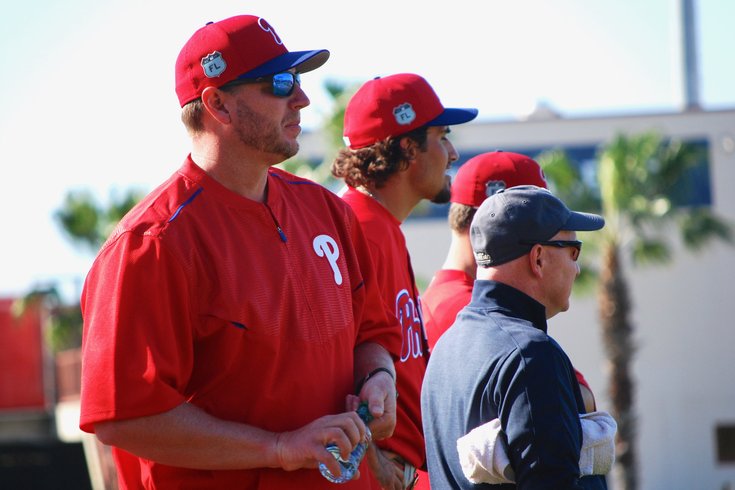 Roy Halladay checked into Phillies camp on Tuesday as a guest instructor. He will work intermittently throughout the next month with the stable of young pitchers in camp this spring.

CLEARWATER, Fla. – Roy Halladay has spent many hours – about 800, he guessed – in the air as an amateur pilot since retiring from baseball four years ago.

He said he has his instrument rating and his multi-engine rating, and is still working toward his commercial rating. He went to an air show in Oshkosh, Wisconsin this past year.

Halladay’s goal is to be able to become an instructor, so he can teach his two sons how to fly.

Until that day comes, Halladay is spending time teaching another craft, one that he was able to master for nearly two decades of his life. Halladay returned to the Phillies organization on Tuesday as a guest instructor in Clearwater, Fla., where he'll work intermittently in the next month working with the large contingent of young pitchers in camp.

“I like just being around,” Halladay said on Tuesday morning at the Carpenter Complex, where he watched Zach Eflin, Jake Thompson, and Alberto Tirado throw to hitters in live batting practice sessions. “For me right now it’s just about learning new names and getting to know people, just being around I think is important for me right now. More than anything I just want to get to know these guys and anyway I can help, I’ll be happy to help.

“Whatever concerns they may have, if any, or talking about things that helped me be successful, so it can cover a range of things. For me, it’s just a pleasure to be able to help out. If it’s throwing BP, I’ll throw BP. … I think it’s just a great opportunity to get out here again and be around the guys. Especially with so many new, young players, it’s exciting for a guy like myself to come in and watch them. If I can share anything that’ll help them, that’s awesome.” 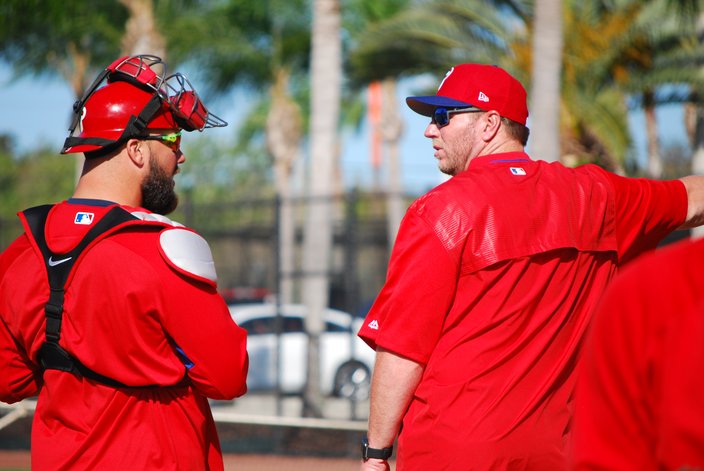 Roy Halladay chats with Cameron Rupp at the Carpenter Complex in Clearwater, Fla.

Halladay, who turns 40 in May, said he had a few offers from other teams to take on a similar role. But after spending the final four years of his 16-year career with the Phillies, he seemed to enjoy the comfort and familiarity that came from rejoining the organization that holds its spring training facility not far from his Oldsmar, Fla., home.

“To me, it feels like the type of organization that they are at this point, and where I felt the most welcomed and the most wanted was here,” Halladay said “And I also felt like there were the best opportunities for me to be helpful. I’m coming in with that hope and we’ll see how these first few days go and go from there.”

Not long after his retirement in December of 2013, after battling through injuries in his last two seasons with the Phillies, Halladay talked about the idea of getting back into baseball one day, possibly as a coach or in a front office role.

Is that what’s happening this week in Clearwater? Is Halladay’s stint as an instructor the gateway to a more permanent job back in the Phillies organization?

“I think that’s something we’re still talking about,” he said. “There are all kinds of options. As of right now, I think you guys know, I don’t ever try to get too far ahead of myself. I’m going to enjoy this first week here, being a guest coach, and see where things go. We’ll continue talking, but, you know, I think it’s always trying to find a good fit, too. Wherever I can be helpful, and the different things that they may need, those are things for us to talk about I guess. But right now I’m just grateful for the opportunity to be here and help out.”

Halladay first joined the Phillies in December of 2009, less than two months after the team played in its second consecutive World Series. The long-time Toronto Blue Jays ace waived his no-trade clause and signed a team-friendly extension with the Phillies with the hopes of pitching in the postseason for the first time in his career and winning a World Series ring, too.

Halladay was able to accomplish the first part, and with style, pitching a perfect game, throwing what was just the second postseason no-hitter in baseball history, and collecting his second Cy Young Award during his first season with the team in 2010. He was the runner-up for the Cy Young Award in 2011, when he led a staff that fueled the Phillies to a franchise-record 102 wins.

Halladay never did reach a World Series. Perhaps in his second career, he can help the next wave of pitchers coming through the Phillies organization to reach their own goals.

“I spent some time with him when I was in Philly (in January of 2016) for the prospect education (seminar) – he’s awesome,” Thompson said. “For as good of a pitcher as he was, he’s even a better baseball mind. He is able to grasp pitching on a different level than most people. … Just the thought process that goes into pitching, he’s incredible.” 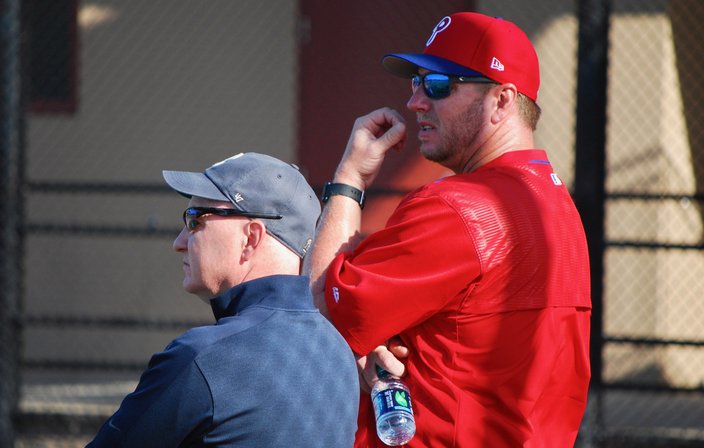 Halladay previously worked as a guest instructor in Phillies camp in the spring of 2014, his first season after retirement. Although he hadn’t been back in the team’s uniform again until Tuesday morning, Halladay has remained in the game and began to get his feel for coaching.

Halladay coaches the U-12 team his 12-year-old son, Ryan, plays on, and is also in his second season as the pitching coach at Clearwater’s Calvary Christian High School, where his 16-year-old son, Braden, plays on the varsity team. Both of his sons, of course, are pitchers.

Halladay was asked if he’s been busy incorporating a cutter (his signature pitch) into the respective repertoires of his teenage students.

“No, you know I haven’t taught any cutters yet,” Halladay said with a laugh. “I’m stealing (former Phillies pitching coach Rich) Dubee’s trick, I’m teaching everybody changeups. …Mostly a split (changeup). I tell you what, it’s one of the easiest for young kids to be able to throw. It’s not that complicated, it’s an easy grip. And they usually get decent results out of it. I got to thank him for that. The parents are thanking me, I have to go thank Dubee.”

Later this year, Halladay will take his younger son’s team to Cooperstown, N.Y., for a tournament. In two years, Halladay will join former teammate Roy Oswalt and New York Yankees greats Mariano Rivera and Andy Pettite as first-timers on the ballot for induction to the National Baseball Hall of Fame.

With his son’s upcoming tournament, Halladay said it’s been a popular question, whether he’s aware he might be making a return trip to Cooperstown in the summer of 2019.

“It would obviously be a tremendous honor,” Halladay said. “I don’t know that to think about it honestly. You see guys get in that are deserving and you see guys that are possibly deserving that don’t get in. Boy, it’s a tough thing to figure out. But, absolutely, I would love to be there. I think every player who ever played the game would love to be there. It would be a tremendous honor. It’s just, hope for the best.”